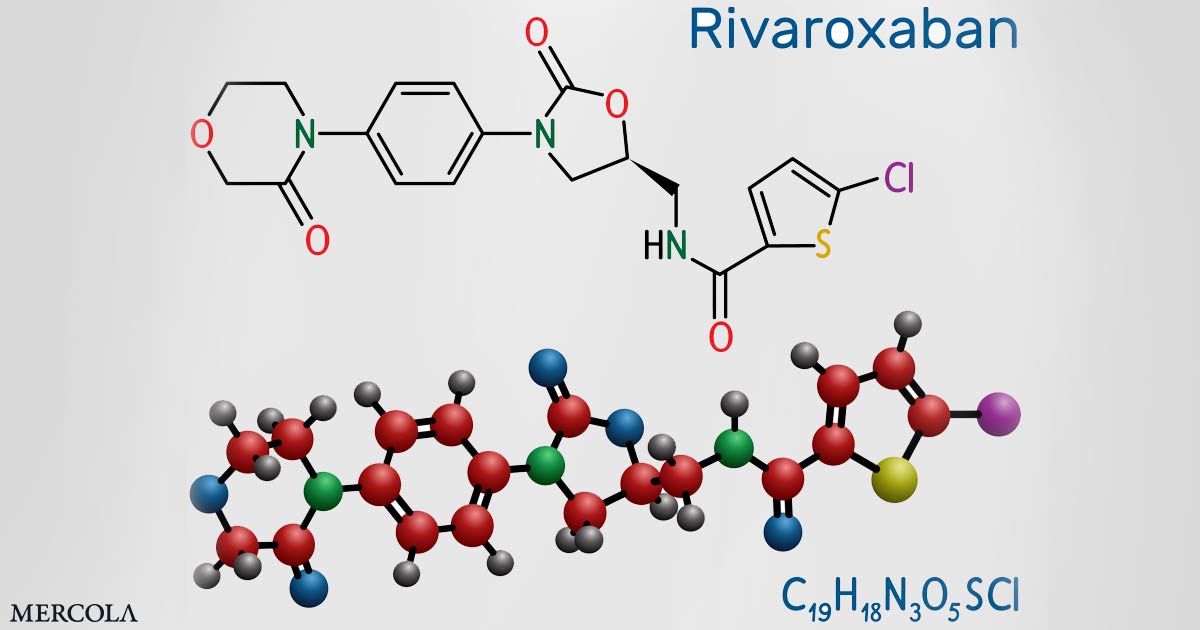 Xarelto (rivaroxaban) is a blockbuster blood thinning medication that’s been prescribed more than 80 million times in the U.S. alone.1 But the drug, which is manufactured by the Janssen Pharmaceuticals division of Johnson & Johnson, may have been approved based on manipulated data.

The research in question was published by researchers with Temple University in Philadelphia. In August 2022, The Journal of American College of Cardiology (JACC) retracted a paper2 that concluded Xarelto “could have a healing effect on hearts.”3

In addition to the retracted research study, the Journal of Molecular and Cellular Cardiology and the Journal of Biological Chemistry are investigating five more papers by the Temple University team.4

The U.S. Office of Research Integrity (ORI), which oversees research integrity activities on behalf of the Secretary of Health and Human Services, including oversight of research misconduct inquiries and investigations,5 also requested in September 2020 that Temple University investigate the research.

As a result, Temple University is also looking into 15 papers published from 2008 to 2020, which received grant money from the U.S. National Institutes of Health.6

The JACC Journals Ethics Board voted to retract the Temple University study after a reader raised concerns about several Western blot images that were used. Western blotting is a technique used to detect the presence of a protein extracted from cells or tissue.7

The editorial board requested a response from the researchers, and they sent original images as a replacement. Initially, the journal published a correction in September 2020, but according to JACC:8

“The correction raised further concerns about the image data. After an external evaluation, the decision to retract the paper is based on concerns regarding the splicing and/or duplication of Western blot images … None of the apparent splices were indicated in the arrangement of the figures.”

The retraction, however, is only the beginning. Of the 15 Xarelto papers being investigated by Temple University, nine were supervised by Abdel Karim Sabri, a professor at the university’s Cardiovascular Research Center. Sabri’s colleagues, Steven Houser, a former president of the American Heart Association and senior associate dean of research at Temple, is an author of five of these studies, along with another four studies being investigated.

In 2021, Houser filed a lawsuit to stop Temple University’s inquiry and denied falsifying data or engaging in scientific misconduct. According to Reuters, Houser believes “Temple sought to discredit him and steal his discoveries.”9

A Temple spokesperson told Reuters that it’s still reviewing the allegations. However, the lack of standardization in misconduct reviews is glaring. Even though the research is subject to fraud investigations, Janssen Pharmaceuticals was reportedly unaware of the inquiries or the study retraction by the JACC.

Meanwhile, the journals that have published the research studies being reviewed for misconduct have not published any “expressions of concern,” which inform readers that there may be reason to doubt the results. Further, five of the studies have been published in American Heart Association (AHA) journals where Houser acts as a senior advisory editor. Reuters reported:10

“The AHA said it had not been notified by the U.S. agency or by Temple about their inquiry, and that it does not view itself as responsible for investigating further. The AHA said it had issued a correction of data on one paper at the authors’ request. The paper was the sole study under scrutiny that listed Houser as supervising researcher.”

An analysis of NIH grants by Reuters revealed that Houser received close to $40 million in NIH funding while Sabri received nearly $10 million.11 A separate Reuters investigation revealed in June 2022 that NIH spent at least $588 million on research into whether heart stem cells could regenerate human hearts.

In 2013, the government became aware of misconduct in the field; a leading researcher, Dr. Piero Anversa, was accused — and later found guilty — of fabrication of data and “deliberately misleading record-keeping.”12 According to Reuters:13

“Yet federal money has continued to flow to test the proposition advanced by Anversa — that adult stem cells can regenerate or heal hearts. Over two decades, federal and private grants have streamed into research labs despite allegations of fraud and fabrication against Anversa and others in the field, Reuters found.

Meanwhile, no scientist has credibly established that Anversa’s regeneration hypothesis holds true in humans, according to researchers and a review of medical literature.

Since 2001, the U.S. National Institutes of Health spent at least $588 million on such heart research, Reuters found in an analysis of government data. More than $249 million, about 43% of the total, has been awarded since March 2013. By that time, the federal government had been informed of the fabrication allegations against Anversa, according to documents and interviews with sources familiar with the matter.”

Brigham and Women’s Hospital in Boston, where Anversa’s lab was located, agreed to pay back $10 million to NIH, which is only about one-fourth of what the lab received for Anversa’s heart stem cell research.14 It’s unknown whether Temple will be required to return federal funding for the research retracted by the JACC.

Xarelto is taken to thin the blood to prevent blood clots and strokes. However, it can trigger deadly bleeding, an adverse effect that consumers weren’t adequately warned about. The episodes were serious and common enough that, in 2018, the U.S. Food and Drug Administration approved Andexxa to act as an antidote to stop bleeding caused by Xarelto.15

About 25,000 lawsuits were filed against Johnson & Johnson and Bayer, which jointly sell Xarelto, claiming that the companies failed to warn patients about the drug’s potentially fatal bleeding risks. Although they did not admit liability, the companies agreed to pay $775 million to settle the lawsuits in 2019.

Further, in 2016, a blood testing device was recalled that was used in Xarelto’s ROCKET-AF clinical trial, which provided “the primary data to support the 2011 approval” of the drug. The device, which was later found to be faulty and capable of generating inaccurate results, was used in the Xarelto trial to monitor warfarin therapy in the control group.16

Although the FDA concluded that the trial results were not affected by the faulty monitoring device, the lawyers for the plaintiffs in the Xarelto lawsuits questioned whether the study’s results were skewed.17

If you’re taking Xarelto, you should know that a nationwide population-based cohort study published in 2021 found that, compared to other direct oral anticoagulants (DOACs), Xarelto was associated with higher rates of gastrointestinal bleeding.18

Specifically, compared to Eliquis (apixaban), manufactured by Bristol-Myers Squibb, Xarelto was 46% more likely to cause gastrointestinal bleeding. According to lead study author Dr. Arnar B. Ingason with the University of Iceland, Reykjavik:19

“We had this theory that rivaroxaban would have potentially higher risks of GI bleeding because it’s given as a once-daily dose, compared to the other two drugs, which are given twice daily. Theoretically, this should cause greater variance in drug plasma concentration, making these patients more susceptible to bleeding.”

A 2016 study found similar results, noting, “In a population-based study of patients receiving DOAC agents, we found apixaban had the most favorable GI safety profile and rivaroxaban [Xarelto] the least favorable profile.”20

Dr. Neena S. Abraham, who led the 2016 study, told TCTMD, “I don’t think further investigation is needed on this topic. The data from the last four years overwhelmingly show that rivaroxaban is most likely to cause gastrointestinal bleeding. This finding is consistent among all age groups.”21

Blood clotting has been described as the basic underlying pathological process that causes all heart disease. In almost everyone, the process of endothelial damage and blood clotting is an ongoing process, which means that problems only occur when the damage/blood clotting process occurs faster than the repair process, at which point you will end up with plaque buildup.

This thickens the arterial wall, forcing blood flow through a narrower gap. When a large blood clot forms on top of an existing plaque in this already narrowed area, you can end up with a heart attack or stroke.

In my interview with Dr. Malcolm Kendrick, a board-certified family physician and author of the book, “The Clot Thickens: The Enduring Mystery of Heart Disease,” he details solid strategies for lowering your thrombotic risk. Here’s a short-list of examples covered in far greater depth in the book, as well as some of my own recommendations that I bring up in the interview:

Xarelto, in particular, is often prescribed for people with certain types of atrial fibrillation (AFib). AFib is an abnormal, often rapid, heart rhythm that occurs when the atria, your heart’s upper chambers, beat out of sync with the ventricles, the heart’s lower chambers. It’s a common symptom in those with heart failure or heart disease but can also occur on its own.

Oxidative stress and increased ROS can play a role in the development of AFib. Conversely, scavenging of ROS and a reduction in oxidative stress have been shown to be an essential part of keeping the heart functioning normally.22 Toward this end, CoQ10 has been found to help improve AFib.23 For older adults, ubiquinol, the reduced version of CoQ10, is more readily absorbed.

Another option for those looking to avoid Xarelto’s risks — as we await the findings of the broadening inquiries into potential research misconduct — is lumbrokinase, a complex fibrinolytic enzyme extracted from earthworms. As noted in the Institute for Progressive Medicine, this represents a potentially safer option for thinning your blood naturally:24

“Generally, we are better off with blood that clots less easily … Individuals at high risk of forming clots, such as those with atrial fibrillation, are often treated with blood thinners like aspirin or stronger agents like Coumadin … All of these agents, however, present a significant risk of bleeding, and may themselves cause brain hemorrhage, urinary or gastrointestinal bleeding.

Lumbrokinase … reduces coagulation by lowering blood viscosity, lowering the activity of clotting factors including fibrinogen, and degrading fibrin, a critical factor in clot formation. It has a stronger effect on reducing blood viscosity than other enzyme preparations.”