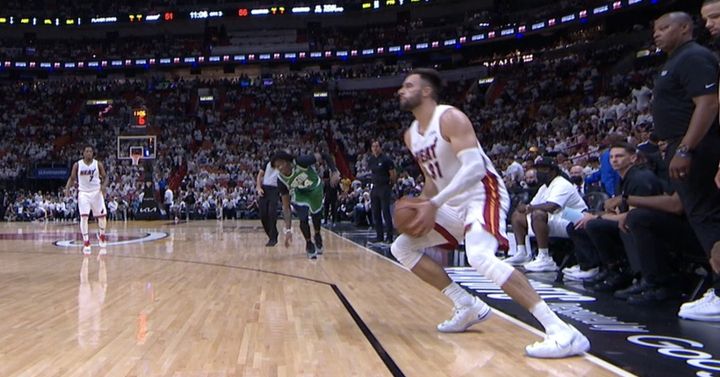 A three-pointer by Max Strus was retroactively wiped off the board by the referees during the third quarter of Game 7 of the 2022 Eastern Conference Finals between the Boston Celtics and Miami Heat. The Celtics eventually beat the Heat, 100-96, to win Game 7 and earn a trip to the 2022 NBA Finals against the Golden State Warriors.

The shot was originally ruled as good before the refs reviewed it several minutes later and took three points off the board for Miami. It was a devastating blow for the Heat who had cut Boston’s lead to two on the shot.

Here’s a look at the shot.

Did Strus’ heel touch out of bounds? It looks like it could be hovering over the line before he releases the shot.

Either way, this is an extremely close play. It’s shocking to see the refs wipe three points off the scoreboard for Miami several minutes of game time later on a play this close.

Strus made his shot at the 11:04 mark of the third quarter. The refs took the points off the board while Boston big man Robert Williams was shooting free throws at the 8:28 mark of the third. It looks extremely odd to see points taken away from Miami in the game log:

Would Miami have been allowed to challenge this several minutes later?

Can you challenge a retroactive replay overturn? Asking for a friend.

The winner of Game 7 plays the Golden State Warriors in the 2022 NBA Finals. Find the full schedule for the NBA Finals here.