Ethical Today Ethical Today is your news, entertainment, lifestyle website.
Home News Freedom by bike, the chance to own a wind farm, more paths to agency 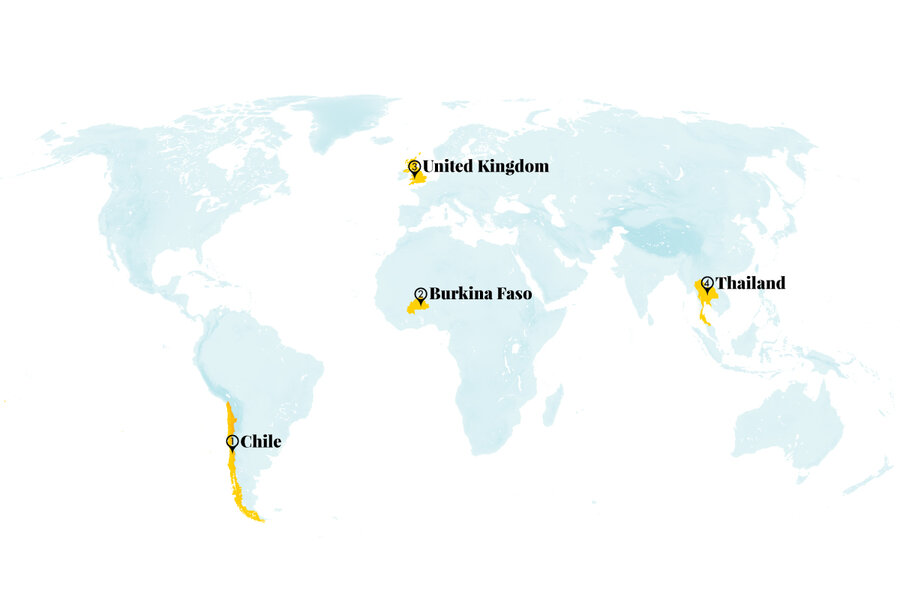 In addition to two stories where people gain the freedom of more choices, our environmental progress includes a Southern Hemisphere glacier park and a phone app whose notifications are helping fight Thai forest fires.

A new national park in Chile will protect over 185,000 acres of melting glaciers. The National Glacier Park site is 60 kilometers
(37 miles) from the capital city of Santiago and will protect 46% of the ice found in the Andes area of the metropolitan region, where over 7 million of the nation’s 19 million people live. “It is a fundamental step that our country is taking to combat the destruction of nature,” said then-President Sebastián Piñera on March 6.

In our progress roundup, two ways that people gained greater agency over their lives: a wind farm that’s owned by its consumers and a nonprofit that gives away bikes in rural areas.

Glaciers are a key indicator of climate change for scientists, and all but two of Chile’s 26,000 glaciers are shrinking due to rising temperatures. In the southern region of Patagonia, glaciers are diminishing faster than in any other location around the world. Meanwhile, a national law for glacier protection has been under debate since it was proposed in 2006. The new national park cannot turn back the clock on climate change and has been criticized for not protecting enough land, but it is a sign politicians are heeding the urgent call from scientists and environmentalists for more robust protections. The government says the park will serve as a key site for ecotourism and research.
Agence France-Presse; EOS; University of Santiago, Chile, Daily

In an architecture exhibit at the Royal Academy of Arts in London in 2014, Francis Kéré designed his installation using plastic honeycomb panels. He intended for visitors to add colorful straws to the structure.

Francis Kéré became the first African to earn the Pritzker Prize, architecture’s most prestigious award. When Mr. Kéré was a boy in the village of Gando, Burkina Faso, there was no school. He was sent to the provincial capital to receive an education – in an unventilated, crowded classroom with poor lighting. There, sitting with over 150 other students in 110 F heat, he made up his mind: “In my heart, I felt even then that I wanted to build things better one day, so that kids like me would be free to learn,” he recalls.

Mr. Kéré studied architecture at the Technical University of Berlin. While there, he raised $50,000 to build Gando’s first primary school, later adding teachers’ housing and a library. The student body has since grown from 120 to 700. He has designed schools, libraries, health care facilities, and public spaces throughout West Africa, using simple, local materials in innovative ways, and has built structures across Europe and the United States. His architectural philosophy combines social service and elegance. “It is not because you are poor that you should not try to create quality,” said Mr. Kéré. “Everyone deserves quality, everyone deserves luxury, and everyone deserves comfort.”
The New York Times, Pritzker Architecture Prize

The United Kingdom’s first consumer-owned wind farm came online in South Wales. Each of the 907 owners of the Graig Fatha wind turbine, operated by Ripple Energy, is also a consumer of the affordable, stable-priced green energy.

A share of the wind farm can be purchased for as little as £25 ($33), and most members own enough to supply all of their home energy needs. Together, the co-owners have contributed £2.2 million ($2.9 million) to the project, which also received a grant from the Welsh government for £1.1 million. The electricity generated is first sold to Co-op Energy, which then supplies owners with power, discounted at rates that depend in part on how much of the turbine the customer owns. Thousands of people have already signed up to become members of Ripple’s second wind farm in Ayrshire, Scotland.
Energy Digital

Firefighters work to extinguish a forest blaze in the Samoeng District of Thailand in 2019.

It’s becoming easier for communities to fight forest fires in Thailand thanks to a new phone app. Every year from February to April, dry weather creates conditions for a dangerous fire season in the north of the country. In 2017, geospatial technology researcher Nion Sirimongkonlertkul, from the Rajamangala University of Technology Lanna, developed an application that uses data from NASA satellites to visualize a map of fire hot spots as they’re burning. Nearby firefighters and local volunteers are notified and shown the shortest path to the flames. Dr. Nion says the community involvement fosters a sense of empathy and shared responsibility.

In the past, only the national government could access this data, which it would send via email to firefighters. “Now with the app, everybody can monitor the fires in real time,” said Natthaphon Singtuan, head of the forest fire volunteer center at the nonprofit Mirror Foundation. “So we join forces. And the more people there are, the safer it is.” The app has thousands of downloads, and developers plan to expand its use around the country and beyond. With some fires set to prepare land for cultivation, researchers are also working to help farmers move away from burning toward more sustainable practices.
Mongabay

Bike donations around the world have made school and work more accessible. In rural and remote areas, dependable modes of transportation can be expensive, dangerous, or nonexistent. “Bicycles are a really overlooked tool for people to access opportunities,” said World Bicycle Relief (WBR) CEO Dave Neiswander. “There’s a billion people [who] are challenged to find reliable transportation. Bicycles are a very efficient way for them to help themselves.”

The nonprofit has distributed more than 635,000 bicycles since 2005, in places ranging from Zambia and Zimbabwe to Colombia and Sri Lanka. Wherever it goes, WBR works closely with the entire community, including schools, religious organizations, and civic leaders, to assess local needs. In Zambia, primary school girls who received bikes reduced absenteeism by 28%, lowered dropout rates by 19%, and improved punctuality by 66%, according to a WBR study. For years, research has shown that in areas with poor transportation infrastructure, bikes can be a tool against poverty.

Following its success with donations, WBR began a social enterprise organization to meet growing demand, allowing individuals to buy a bike and pay it off in small increments. WBR also gives local employment a boost through training for mechanics – around 2,300 so far – who work at its 60 repair shops worldwide.
Reasons To Be Cheerful