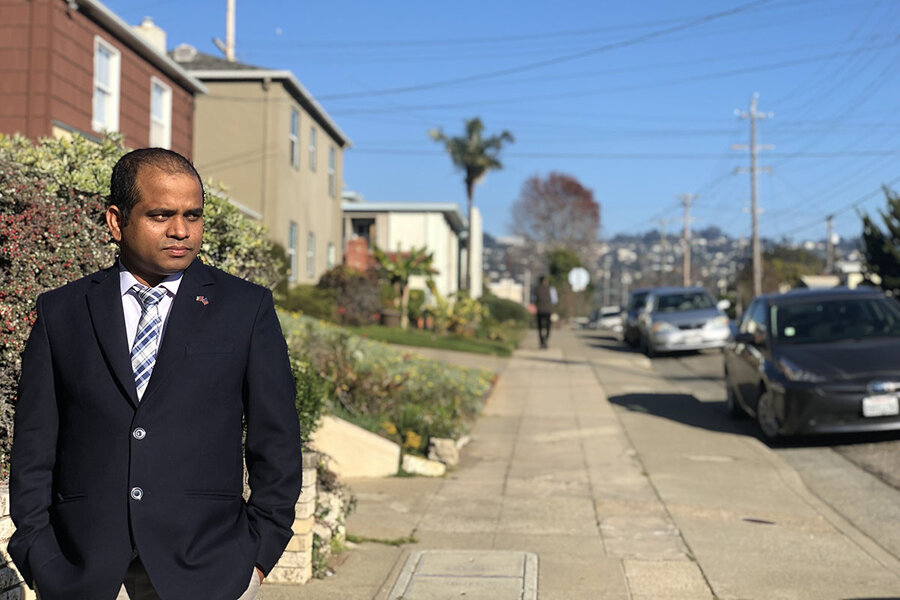 Prem Pariyar came to the United States to escape the ubiquitous caste discrimination he experienced growing up in Nepal. But like many other Dalits – members of the marginalized caste formerly known as “untouchables” – he found the same caste dynamics at play overseas.

While pursuing his master’s degree at California State University, East Bay, Mr. Pariyar says he faced derogatory comments and invasive questions meant to tease out his caste status. Dalit activists and allies say incidents of caste-based harassment and exclusion are common in countries with a large South Asian diaspora, but also widely underreported due to a lack of formal recognition in schools and workplaces.

The growing push to address caste discrimination beyond South Asia reflects a changing understanding of the caste system – and an emphasis on fairness.

Several major colleges have recently addressed this by updating their nondiscrimination policies. This year, thanks in large part to Mr. Pariyar’s activism, CSU became the country’s first public university system to ban caste-based discrimination, effective on all 23 campuses. The new policy has sparked backlash from some faculty and Hindu groups, but also reinvigorated efforts to fight caste discrimination in the U.S. and back in Nepal.

Sarita Pariyar, board member of a Dalit think tank in Nepal, says CSU’s recognition of caste sends an important message that “wherever Nepalis go, whether to the U.S. or the moon, they will not accept untouchability.”

Prem Pariyar thought an overseas education would be a way out of the caste discrimination he faced in central Nepal. But he was mistaken.

Shortly after arriving in the United States, he accepted an invitation to have lunch at a friend’s place, someone he had known back home. When it was time for the meal to be served, Mr. Pariyar – who is Dalit, an oppressed caste historically considered impure or “untouchable” – was stopped by the host’s wife. “I was told not to approach the food because I would pollute it,” recalls Mr. Pariyar. “Caste discrimination does not require a visa. It travels everywhere.”

It’s a common story. Young people from lower castes go abroad to escape discrimination and seek new opportunities. Once they arrive, they find the same caste dynamics at play in the classroom and beyond. Over the past few years, several major U.S. colleges have updated their nondiscrimination policies to include caste, including Brandeis University in 2019 and Colby College in 2021. Thanks in large part to Mr. Pariyar’s own activism, California State University this year became the country’s first public university system to ban caste-based discrimination. The new policy has sparked backlash from some faculty and Hindu groups, but also reinvigorated efforts to fight caste discrimination in the U.S. and back in Nepal.

The growing push to address caste discrimination beyond South Asia reflects a changing understanding of the caste system – and an emphasis on fairness.

Sarita Pariyar, writer and board member of Samata Foundation, a Dalit think tank in Nepal, believes that CSU’s recognition of caste sends an important message to political leaders, educators, and the public. “Wherever Nepalis go, whether to the U.S. or the moon, they will not accept untouchability,” says Ms. Pariyar.

Similar to India and Sri Lanka, Nepal has a long history of caste. The hereditary system broadly divided communities according to the Hindu model of four social classes, or varna: Brahmins (priests and teachers), Kshatriya (rulers and warriors), Vaishya (merchants and teachers), and Sudra (servants and laborers). Below the Sudra are Dalits, formerly known as “untouchables.” Over time, these classifications were codified into laws that transcended religious lines.

Nepal declared the caste system unconstitutional in 1951, and criminalized caste-based discrimination in 2011. Yet even now, caste remains a prominent form of discrimination in both urban and rural areas throughout South Asia, where the mention of a surname or occupation can put a person on the receiving end of harassment for its association with lower castes. In India, the practice of “untouchability” – through segregated housing or denying Dalits entry into homes, cafes, and temples – is common. In the Dalit community of Nepal, which accounts for up to 20% of the population, education levels are lower than average and poverty levels run high.

Mr. Pariyar grew tired after years of harassment while working as a teacher in Kathmandu. “Everywhere there was resistance and trouble,” he says, but the final straw came in 2014, when a gang of roughly 30 dominant-caste people attacked his family at their home. Mr. Pariyar’s father had been about 50 cents short while buying a tailoring machine that day, and the seller was offended by his request to pay the money later. The father was hospitalized for severe injuries. Mr. Pariyar says he had to knock on the doors of politicians and human rights activists before the police allowed him to file a complaint, and the family was later pressured to drop the investigation. Mr. Pariyar moved to the U.S. the following year, and not long after enrolled in the social work master’s degree program at CSU, East Bay.

Vipin P. Veetil, an economist based in India, says the caste system has forced the lower caste into menial professions and barred them from receiving an adequate education in South Asia, leading many to head west in search of better opportunities. But they often find Brahmins dominate higher education overseas as well – as Dr. Veetil noticed during his Ph.D. studies at George Mason University.

A 2016 survey conducted by the Dalit civil rights organization Equality Labs suggests a third of Dalit students in the U.S. face discrimination during their education. One in 4 Dalits surveyed experienced verbal or physical abuse, and half said they were afraid of their caste being “outed.” More recent surveys and media reports have also found evidence of caste-based favoritism in Silicon Valley, as well as harassment in social and community spaces.

Dr. Veetil says that CSU’s decision and others like it provide a “protection to make the American dream come true” for the lower castes.

Before the change, Mr. Pariyar noticed that his colleagues at CSU spoke about gender, race, and other inequalities in class, but seemed unaware of what he saw as the biggest injustice occurring in South Asia and among the diaspora. When he tried discussing his experiences with casteism, professors and other South Asian students denied any knowledge of modern-day discrimination, leaving him feeling embarrassed.

But he kept speaking up, and eventually a professor connected Mr. Pariyar to Equality Labs, spurring more formal activism. The graduate student began seeing results last year, with the Cal State Student Association voting to recognize caste as a protected status and the University of California, Davis, where Mr. Pariyar also lobbied for change, adding caste to its protected categories in November.

Calls for acknowledgment were picking up steam, even among students from the dominant caste, recalls Mr. Pariyar, who graduated in 2021. “This movement has become an interfaith and interracial coalition,” he adds. Then, in a historic move, CSU’s board of trustees voted unanimously to make caste a protected category in January, effective on all 23 campuses.

Some faculty and Hindu groups disapprove of the change, arguing that caste discrimination would already be prohibited under the university’s rules on race, national origin, or ancestry.

In an open letter to the board of trustees, more than 80 CSU faculty members anonymously wrote that highlighting caste will “cause more discrimination by unconstitutionally singling out and targeting Hindu faculty of Indian and South Asian descent.”

Suhag Shukla, co-founder and executive director of the Hindu American Foundation, supports the professors and lauds their courage.

The new policy “is an arbitrary, unjustified, and a deeply offensive affront to their decades of service,” says Ms. Shukla by email, adding that CSU has created a new problem by “institutionalizing implicit bias and discrimination against all people of Indian and Hindu heritage.”

Many Dalits and allies disagree. They argue caste already follows South Asians overseas, but incidents of discrimination or exclusion often go unreported because of the lack of formal recognition in schools and workplaces. Mr. Pariyar’s success has inspired other students to push for caste protections at their own institutions.

Bikash Gupta, a Nepali student of public policy and data analytics at Carnegie Mellon University, is drafting a letter with fellow students to submit to the school administration. “It will talk about how caste is a form of discrimination and a global issue, and the evolving research or interpretations of caste,” says Mr. Gupta.

Experts say change will be more difficult – but equally, if not more, important – back in Nepal, where discrimination is rampant despite being illegal. But Ms. Pariyar, from the Dalit think tank, says Mr. Pariyar’s persistence is a reminder for Nepali students not “to remain silent on unacceptable casteist slurs and caste-based discrimination, especially in higher education.”