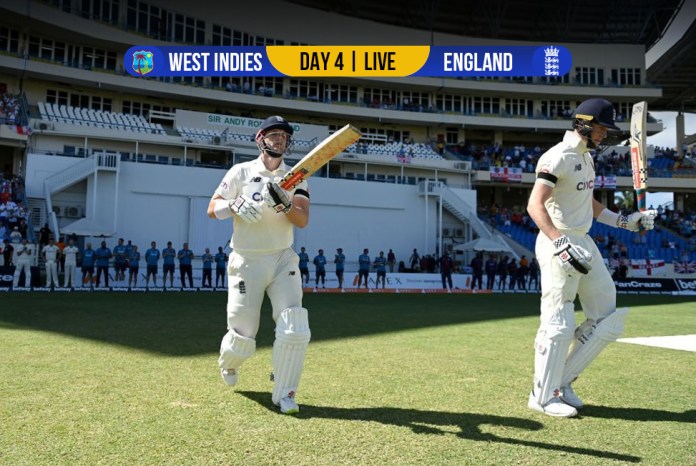 WI vs ENG Live Score, Day 4: Zak Crawley’s impressive knock has steadied England’s ship as they aim to put up a big second innings score, chasing a 64-run deficit from the first innings. At Lunch on Day 4, England finds themselves at 72/1, leading by eight runs. Follow Insidesport.IN for all West Indies vs England LIVE Updates.

England lost opening batter Alex Lees early in the second innings of their ongoing Test match against West Indies. The Three Lions are currently at 24/1. Earlier, Nkrumah Bonner’s scintillating century and valiant contributions from the lower order helped West Indies put up a total of 375 in reply to England’s first innings score of 311.

After openers Kraigg Brathwaite and John Campbell scored freely in an 83-run stand, West Indies lost four wickets for 44 as the visitors fought back to the delight of the travelling Barmy Army. But Bonner and the experienced Holder hunkered down to see off an excellent spell of reverse swing by Mark Wood and Ben Stokes. The Caribbean boys lost their last wicket in the third delivery of Day 4, as Jack Leach trapped Jayden Seales leg before wicket.

ENGLAND Second Innings – England start their second innings with Zak Crawley and Alex Lees opening the batting. They are trailing by 64 runs.

DAY 4 – Jack Leach has the ball to start off Day 4’s action.

FOUR! Sweeps past leg slip for a boundary.

FOUR! Edged. Flies past Zak Crawley at first slip and rushes towards the boundary.

WICKET! Jack Leach breaks the partnership as Joshua da Silva misses a delivery that hits his pad. Review suggest that the ball would have crashed top of leg stump.

FOUR! Short and wide, Bonner cuts it this time towards vacant bacward point.

FOUR! Bonner pulls a short delivery towards deep-midwicket fence for a boundary.

WICKET! Ben Stokes breaks the partnership between Nkrumah Bonner and Jason Holder as he bowls an outswinger that gets the edge of Holder and Ben Foakes takes a good catch.

Spinner Jack Leach then anchored down one end, bowling 47 successive dot balls at one stage, but Holder opened his broad shoulders occasionally, notably hitting part-time spinner Joe Root over long-on for a towering six. A frustrated England could not break through again before the close on a day when intermittent showers briefly interrupted play several times. The second new ball, 13.1 overs away, cannot come quickly enough for England.

Ben Stokes gave England a much-deserved breakthrough at the start of Day 3 of the first Test against West Indies as he dismissed Jason Holder. Jason Holder and Nkrumah Bonner shared an unbeaten 75-run partnership as West Indies recovered from a mini collapse and advanced to 202 for four at the end of second day at Viv Richards Stadium in North Sound. The pair could however add 4 more runs as Ben Stokes bowled an outswinger that took the edge off his bat and flew straight to keeper Ben Foakes who collected a simple catch. Holder departed scoring 45 runs. With the new ball due in few overs, England will look to take quick wickets new ball can change their fortunes.

The three-Test series is being contested for the newly-named Richards-Botham Trophy in honour of the former Test opponents and Somerset county team mates, Viv Richards and Ian Botham who were sat side by side in the crowd.