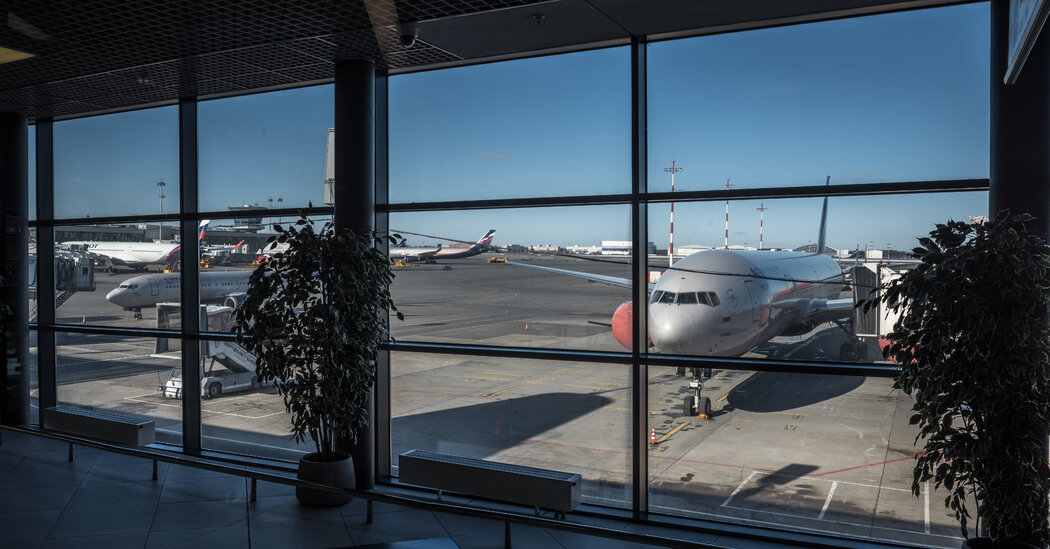 LONDON — In Switzerland, the Lucerne music festival canceled two symphony concerts featuring a Russian maestro. In Australia, the national swim team said it would boycott a world championship meet in Russia. At the Magic Mountain Ski Area in Vermont, a bartender poured bottles of Stolichnaya vodka down the drain.

From culture to commerce, sports to travel, the world is shunning Russia in myriad ways to protest President Vladimir V. Putin’s invasion of Ukraine. Not since the frigid days of the Cold War have so many doors closed on Russia and its people — a worldwide repudiation driven as much by the impulse to show solidarity with besieged Ukrainians as by any hope that it will force Mr. Putin to pull back his troops.

The boycotts and cancellations are piling up in parallel with the sanctions imposed by the United States, Europe, and other powers. Although these grass-roots gestures inflict less harm on Russia’s economy than sweeping restrictions on Russian banks or the mothballing of a natural gas pipeline, they carry a potent symbolic punch, leaving millions of ordinary Russians isolated in an interconnected world.

Among the most visible targets of this opprobrium are cultural icons like Valery Gergiev, the conductor and a longtime backer of Mr. Putin. He has been dropped by Lucerne, Carnegie Hall, La Scala in Milan, and faces imminent dismissal by the Munich Philharmonic, where he is chief conductor, unless he disavows the invasion of Ukraine.

Russia has been banned from this year’s Eurovision Song Contest, which it last won in 2008, with Dima Bilan performing his power ballad, “Believe.” Russia’s Formula 1 Grand Prix, scheduled for September in Sochi, has been scrapped. St. Petersburg has lost the Champions League soccer final, which was relocated to Paris.

Russia’s World Cup hopes were dashed on Monday after a dozen countries joined Poland in refusing to play its national soccer team in qualifying rounds. Under intense pressure, soccer’s two main governing bodies, FIFA and UEFA, ruled that Russia was ineligible to play in their tournaments. In Germany, the soccer club Schalke severed a sponsorship deal with the Russian oil giant Gazprom. The National Hockey League also suspended its business dealings in Russia.

Also on Monday, Greece announced that it would suspend all collaborations with Russian cultural organizations. A French former ballet star, Laurent Hilaire, resigned as the director of the Stanislavksi Theatre Company in Moscow, saying that “the context no longer allows me to work with peace of mind.”

“Canceling all these cultural exchanges and sporting events will be felt by the Russian population,” said Angela E. Stent, a senior fellow at the Brookings Institution and author of the book, “Putin’s World.” “Unfortunately, at the Kremlin level, it will be seen as just another example of the West trying to paint us into a corner.”

“It will become part of the narrative of victimhood, which we’ve heard from Putin in spades over the last few weeks,” Ms. Stent said. “The boycotts affect the people involved in those events, but we’re talking about Putin and the few people around him. I’m not sure it’s going to make him change his mind.”

The last time the country’s leaders provoked such a global backlash was in 1980 when the United States, West Germany, Japan, and Canada boycotted the Olympic Games in Moscow to protest the Soviet Union’s invasion of Afghanistan. The Soviets retaliated by skipping the 1984 Games in Los Angeles.

That was during the depths of the Cold War, when Hollywood released jingoistic films like “Red Dawn,” about a fictional Soviet invasion of Colorado, and more than 100 million Americans tuned into “The Day After,” a television movie about a calamitous nuclear exchange between the United States and the Soviet Union.

The Olympics boycott had a major impact on popular sentiment, according to Russia experts, because the then-Soviet leader, Leonid I. Brezhnev, had presented them as a simulacrum of Soviet power and influence, much as Mr. Putin has framed the invasion of Ukraine in terms of reclaiming Russian greatness.

“The Soviet government had to explain why the United States and other countries weren’t there,” said Michael F. McFaul, a former American ambassador to Russia. “It began to affect the way that Soviet citizens saw themselves in the world.”

Though Russian villains remained a Hollywood staple, the country’s black-hat image faded after the collapse of the Communist regime. Younger Russians grew up in a relatively open, if rough-and-tumble, society. Those with money had access to a foreign education and European holidays, where the hosts catered to free-spending Russians.

In Jerusalem, Russian-speaking Israelis flocked to the popular Putin Pub, where the name seemed a lark — no more problematic than the bar’s late-night Russian karaoke. On Thursday, the Russian-born owners stripped the golden “P-U-T-I-N” letters from its facade and announced that they were looking for a new name.

“It was our initiative,” said Yulia Kaplan, one of the three owners, who moved to Israel from St. Petersburg in 1991. “Because we are against war.”

Israel, in its own way, serves as an example of the limits of these kinds of boycotts. For years, critics of its occupation of the West Bank have tried to pressure the government through the Boycott, Divestment, Sanctions movement. While it has had successes, it has antagonized people on both sides of the Israeli-Palestinian divide and failed to pressure successive Israeli leaders to change policy toward the Palestinians.

“Such boycotts won’t change Putin’s mind, for sure,” said Martin S. Indyk, a former American ambassador to Israel. “But it will boost the morale of the Ukrainians to know that people around the world are on their side. And it will put the oligarchs on the spot in a way that I suspect financial sanctions will not.”

Still, the backlash will hit ordinary Russians hard as well. Already, they cannot fly to London and large swaths of the European Union because of bans on Russian flights. Canada closed its airspace to Russian planes on Sunday and announced it was investigating the Russian carrier, Aeroflot, for violating the restrictions.

“Middle-class Russians have been going to Turkey to vacation for a decade,” Mr. McFaul said. “Now they will have to wonder: Will their credit cards work? Will their money be worth anything?”

In capitals from Madrid to London, tens of thousands of people marched in solidarity with the Ukrainians and against the Russian invasion. In Ottawa, the Peace Tower on Parliament Hill, the backdrop for three weeks of trucker protests in the Canadian capital, was lighted up in the colors of the Ukrainian flag.

In Rio de Janeiro, where the invasion coincided with the start of the annual Carnival festival, people wore costumes and carried signs related to the conflict. “Drop acid, not bombs,” one sign said in English.

What is at the root of this invasion? Russia considers Ukraine within its natural sphere of influence, and it has grown unnerved at Ukraine’s closeness with the West and the prospect that the country might join NATO or the European Union. While Ukraine is part of neither, it receives financial and military aid from the United States and Europe.

Are these tensions just starting now? Antagonism between the two nations has been simmering since 2014, when the Russian military crossed into Ukrainian territory, after an uprising in Ukraine replaced their Russia-friendly president with a pro-Western government. Then, Russia annexed Crimea and inspired a separatist movement in the east. A cease-fire was negotiated in 2015, but fighting has continued.

How has Ukraine responded? On Feb. 23, Ukraine declared a 30-day state of emergency as cyberattacks knocked out government institutions. Following the beginning of the attacks, Volodymyr Zelensky, Ukraine’s president, declared martial law. The foreign minister called the attacks “a full-scale invasion” and called on the world to “stop Putin.”

“The totality of it — the sanctions, the cheering football fans for the Ukrainians, the crowds marching in Berlin and Prague — I do think it matters because it makes Russians feel isolated,” Mr. McFaul said.

That is likely to deepen the opposition of some Russians to the invasion, he said, particularly among urban, educated elites. These people have access to the internet and are aware of the scornful reaction to Mr. Putin’s aggression. But among those who live in more provincial areas, where the media is tightly controlled by the government, the backlash against Russia could breed further resentment.

Some cultural institutions have tailored their actions against people who are known for their close ties to Mr. Putin. The Metropolitan Opera, for example, said it would no longer work “with artists or institutions that support Putin or are supported by him,” Peter Gelb, the Met’s general manager, said in a video statement.

That has prompted a show of defiance from some Russian artists. The star soprano Anna Netrebko, who is scheduled to perform at the Met in Puccini’s “Turandot” in April, has tried to distance herself from the Russian invasion. But she also posted on her Instagram account, “forcing artists, or any public figure, to voice their political opinions in public and to denounce their homeland is not right.”

Not all cultural exchanges have been sundered. A blockbuster show of French and Russian paintings at the Louis Vuitton Foundation in Paris remains open.

The exhibit — showcasing 200 works collected by two 20th-century Russian textile magnates — grew out of high-level discussions between President Emmanuel Macron of France, Mr. Putin and the chief executive of LVMH, Bernard Arnault. Both leaders signed contributions to the exhibit’s catalog, and Mr. Putin signed off on loans for the paintings.

For many, however, the idea of supporting Russia is simply intolerable. Pennsylvania, Utah, Ohio, New Hampshire, and other states, as well as Canada, have pulled Russian-branded vodka off the shelves of liquor stores.

In some cases, the gesture is misplaced: Stolichnaya, though historically a Russian brand, is manufactured in Riga, Latvia. In Brazil, a São Paulo bar has renamed its Moscow Mule — a drink that was concocted in the United States and is made with vodka, ginger beer, and lime — as a U.N. Mule.

“We’re not too happy with what Moscow has done, with what Russia has done,” said the bar’s co-owner, Maurício Meirelles, a well-known comedian and television host in Brazil. “And then we thought about changing the name,” he added. “The U.N. Mule: the drink that isn’t attacking anyone.”