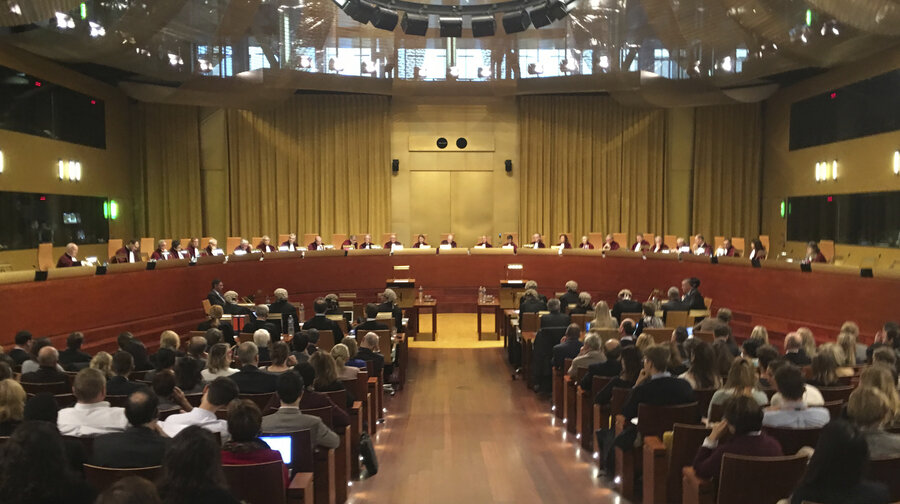 In a ruling hailed as a boost to democratic values, the European Union’s highest court said Wednesday that the 27-nation bloc can suspend support payments to member states if they breach rule of law principles.

The right-wing governments of Hungary and Poland, which had challenged the EU’s right to take such action, responded by arguing the rule lacked a proper legal basis and would fundamentally interfere with their running of national business.

Both nations, large recipients of EU funds, have come under increasing criticism over the past few years for veering away from democratic norms with policies such as exerting excessive control over the judiciary, stifling media freedom, and denying the rights of LGBT people.

When it comes to democratic principles, “the European Union must be able to defend those values, within the limits of its powers,” the European Court of Justice said in Wednesday’s ruling.

The court decision was the last impediment to EU institutions withholding funds from any government they consider to be at odds with core democratic principles. The rule, seen as the EU’s most potent weapon to prevent a democratic rift from deepening within the bloc, was approved 14 months ago, but the executive European Commission waited to apply it.

EU Commission President Ursula von der Leyen promised to “act with determination,” and EU legislators immediately urged her to enforce the rule against Poland and Hungary within days, not months. Withholding any funds could take until the end of the year because of institutional rules and a tortuous approval process.

The reaction from Hungary and Poland was swift. Polish Justice Minister Zbigniew Ziobro – who is responsible for many of the changes seen as eroding the independence of judges – called the court’s move a turning point.

“It is a gloomy date that will be written in the history books,” Mr. Ziobro said. “From an area of freedom, the EU is changing into an area where it will be possible to use unlawful violence in order to take this freedom away from member states and limit their sovereignty.”

Hungarian Justice Minister Judit Varga called the court ruling a “political judgement” and proof that the EU was abusing its power.

“The ruling is another application of pressure against our country because we passed our child protection law during the summer,” Ms. Varga wrote, referring to legislation approved last year which forbids providing children with media content that depicts homosexuality or gender changes.

The EU’s passage of the rule of law funding mechanism predates the Hungarian law, which many critics have decried as a violation of LGBTQ rights.

European officials on the other side of the debate also felt a tipping point had been reached with Wednesday’s ruling. The reactions showed how the democratic discourse in the EU is polarizing and splitting the bloc.

“This ruling is a milestone,” Belgian Prime Minister Alexander De Croo said. “It becomes ever more difficult for member nations to say these [democratic] rights do not entail obligations and that they can be pushed aside at will.”

Both Hungary and Poland reasoned that the court was overstepping its authority in approving a new mechanism that is not described in the EU’s own treaties. They said making a link between finances and the legal decisions of national governments amounted to blackmail from Brussels.

The court argued however that democratic backsliding had not only a political impact but also affected budgetary matters.

“The sound financial management of the Union budget and the financial interests of the Union may be seriously compromised by breaches of the principles of the rule of law committed in a member state,” it said.

Because of extended financial vetting not directly linked to Wednesday’s ruling, Poland has yet to receive some 36 billion euros ($41 billion) from the EU’s pandemic recovery fund, while Hungary’s 7 billion euros were also held up. Those funds could now be further held back because of the ruling.

Poland and Hungary have threatened to retaliate by stalling other EU decisions that require unanimity, including on climate and energy, as well as foreign policy.

Hungarian Prime Minister Viktor Orban’s chief of staff Gergely Gulyas told Reuters that the dispute would not lead Hungary to block an EU-Africa summit later this week or interfere with any potential sanctions against Russia over Ukraine.

Since joining the bloc in 2004, both nations have been major recipients of EU funds to help rebuilt national economies that stagnated under communist rule. Respecting democratic rule of law principles is a beacon of EU admission criteria, and the court insisted that, once a country joins, those principles should stick.

“The court specifies, first, that compliance with those values cannot be reduced to an obligation which a candidate state must meet in order to accede to the European Union and which it may disregard after accession,” it said.

In Hungary, Mr. Orban has been pushing what he calls “illiberal democracy,” which his critics say amounts to stifling democracy. In Poland, the Law and Justice party overwhelmingly dominates the government and has also increasingly faced criticism from other EU member nations. The right-wing government has broken the nation’s own laws to gain political control over courts and judges.

Katalin Cseh, a liberal Hungarian EU lawmaker, said ignoring the erosion of the rule of law in Poland and Hungary would be comparable to the dark comedy film “Don’t Look Up,” in which politicians fail to stop an asteroid from destroying the earth.

“If we are sitting tight and assessing, then Mr. Orban and [Polish Prime Minister Mateusz] Morawiecki would achieve their goal of destroying the Union from within,” she said.

This story was reported by The Associated Press. Justin Spike in Budapest and Vanessa Gera in Warsaw contributed reporting. Material from Reuters was used in this report.