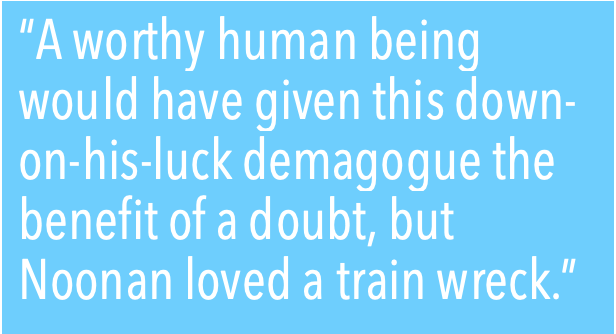 Scott D. Pomfret’s character is unsettled by the sound of a man crying in the neighbouring stall of a public restroom. 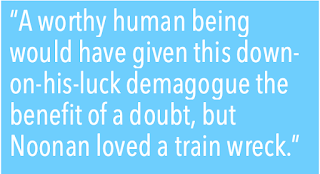 Surely only an erratic and puny spirit of exceptional selfishness, with zero appreciation for the norms of manhood and propriety, would have put Noonan on the spot in such an unforgiveable manner. It was an ambush. Noonan was a prisoner of the man’s sobs. He was their victim. Unforgivingly and achingly echoed with acoustical precision by the tiles and marble, these unchecked sobs called directly into question the certainties that undergirded Noonan’s moral world and his place in it. Nothing was sacred or secure. Marble could freely and spontaneously shatter. Tiles could crack. The world could end. And all because Noonan had dared to allow himself a well-deserved dump in the men’s room at the Davenport Hotel, not expecting the occupant of the neighboring stall would prove to be nothing but a crybaby.

Hey, guy, Noonan wanted to shout, what ever happened to a stiff upper lip? What on earth could be so fucking sad? Little kids washing up on the beach in the Gulf – that was sad. A COVID patient in a body bag after dying alone – that was sad.

Indignant, Noonan yanked up his pants, banged out of his stall, and marched over to the vanity, which was all brass and marble and mirrors from sink to ceiling, the kind of place where last century a man in livery with a tip bucket would have handed him a towel. He let the faucet gush.

What intense satisfaction! What a soothing and sob-obliterating flow! Inevitably, however, the gushing resurrected nature’s call, which Noonan opted to meet halfway at the most distant urinal, as required by universal age-old men’s room etiquette passed on through generations of pissing men in every age and culture.

Just as he took aim, the crybaby released one last long, withering, shuddery, heaving, hollowed-out, snot-nosed sob and emerged from his stall. Noonan had expected a petite, pearl-clutching mess of uncertain manhood, but the crybaby was starched, black-tied, and broad-shouldered, a Wall Street titan or an eastern European demagogue with a mousetrap mouth and made-for-television head. His hollowed face reminded Noonan of the proud, desolate, and doomed face of a Native American chief surveying the ruined landscape of ancestral lands.

A worthy human being would have given this down-on-his-luck demagogue the benefit of a doubt, or at least a little privacy, but Noonan was a sucker for a good train wreck. He couldn’t look away. With a sharp click like the cue ball hitting the eight to finish the game, the crybaby’s gaze snapped sideways and fixed on Noonan in the mirror staring at him. The man’s jaw stiffened. His chin rose slightly. He didn’t backhand the streaks from his cheeks in embarrassment, but wore them as if they were epaulets or a Purple Heart.

Noonan suppressed a giggle. He was holding his penis, which – though they were, after all, in a men’s room – seemed somehow extraneous and out-of-place, as if he were holding someone else’s penis, or their umbrella. He felt compelled to speak, so he made a joke about defective mirrors that failed to reflect the image we maintained of ourselves in our heart of hearts.

Noonan might as well have squatted and deposited a turd on the marble floor at the crybaby’s feet. Steeped in a sudden and overwhelming conviction of superfluousness, Noonan struggled for something more to say. But within him, a stubborn and possibly unjust sense of proportion demanded that the crybaby contribute to the conversation. Maybe offer a confession, or an apology, or an explanation, or a rebuke. Anything at all would do. What had caused the sobs? Was it something the crybaby had done, or something done to him? Something particular, or just an overarching sense of futility?

When the crybaby failed to chime in, Noonan speculated that the crybaby was experiencing erectile dysfunction. That he had adult children who loathed him. That he’d never heard a single piece of music that moved him except the theme to Frozen. And yet, the man had sobbed. Had heroically sobbed. Without restraint. Something genuinely mattered to him. Flooded with envy, Noonan imagined what it would be like to cry about something so soul crushing he’d let go in a public restroom. He ached to live life so fully.

Hours and eons opened between seconds. No drunken revelers broke the uncomfortable silence boasting about women they had banged or Tom Brady’s remarkable resurrection in Tampa Bay. It was up to them to find a resolution to this strange encounter. Them alone. Which caused Noonan to experience a momentary, unexpected sense of comradery and shared purpose, a desire to reach out to this stranger to exchange ritual gifts of shells and beads, or to engage in ceremonial feasting on the flesh of their mutual enemies. Had Noonan not been holding his junk, he might have stridden over and shaken the man’s hand.

Noonan dithered. The crybaby’s lips twitched. His shoulders shuddered. Noonan wouldn’t have been surprised to see the crybaby shrug off pieces of himself – fingers, knuckles, toes, ears, bits of skin. It wouldn’t have been the worst thing if the crybaby cried again. In fact, it would have been a relief. An encore. Noonan could see himself applauding.

But the crybaby didn’t resume his tears. He laughed. And to Noonan’s dismay, and contrary to his sense of fair play, the crybaby’s laughter wasn’t reassuring. It was bug-eyed and too long and too-high-pitched and somehow obscene. The laughter threatened to break or dissolve into something else entirely, which could range from more tears to sudden violence to a spontaneous exhibition of the macarena or a lecture on Proust, none of which Noonan welcomed.

The crybaby yanked a tissue from the holder. It fluttered like a white flag of surrender. He opened his mouth to speak at last, but all Noonan heard was the ridiculous spatter of his own indiscreet and forceful pissing, like a loud talker at a child’s wake.