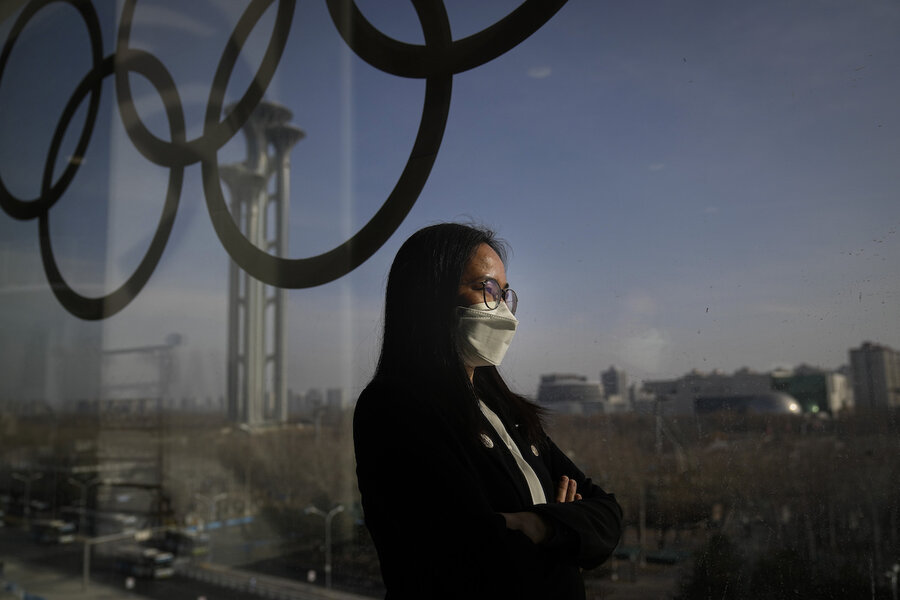 In her mind, Cathy Chen pictures a scene that she herself says could be drawn from a TV drama: Falling into the arms of her husband after long months apart, when he meets her off the plane from Beijing. Scooping up their two young daughters and squeezing them tight.

“I just imagine when we’re back together,” the Olympic Games worker says, “and I just can’t control myself.”

So athletes from countries where the coronavirus has raged can compete in the Olympic host nation with few infections, China’s workforce at the Winter Games is making a giant sacrifice.

Severing them from lives they were busy living before the Olympic circus came to town, more than 50,000 Chinese workers have been hermetically sealed inside the Great Wall-like ring-fence of virus prevention measures that China has erected around the Games, locked in with the athletes and Olympic visitors.

The Olympians jet in for just a few weeks with their skis, skates, sleds, and other gear. Chinese workers who cook, clean, transport, care for them, and otherwise make the Winter Games tick are being sequestered inside the sanitary bubble for several months. As Olympians bank memories to cherish for a lifetime, their Chinese hosts are putting family life on ice.

The sacrifice has been made larger by its timing: the Olympic run-up overlapped with the ushering in on Feb. 1 of the Lunar New Year, the biggest and most precious annual holiday in China. As their loved ones feted the advent of the Year of the Tiger, Olympic workers hooked up with them as best they could via video calls from inside the “closed loop.”

That is the soft-sounding name Chinese authorities have given to the anti-viral barrier they’ve built with high walls, police patrols, thickets of security cameras, mandatory daily tests, and countless squirts of disinfectant – separating the Winter Games from the rest of China.

Ms. Chen found a spot in the workers’ underground canteen of the main Olympic press center for a New Year video-call with her husband, Issac, and their two daughters, Kiiara and Sia. They were gathering with extended family for a celebration dinner. Ms. Chen keeps a screen grab from the call on her phone. She also has a photo of the four of them posing together on Dec. 26, the day Ms. Chen flew from their home in southern China to take up her Olympic job in Beijing.

She works at a Chinese medicine exhibition space in the Olympic press center. Initially hesitant about the prospect of months apart from her family, Ms. Chen subsequently decided that the opportunity to mingle with overseas visitors and promote the pharmaceutical company she works for couldn’t be turned down. She is also hoping for triple pay for having worked through the Lunar New Year holiday.

Her Games will end with the closing ceremony next Sunday. Like all Chinese workers when they exit the bubble, she will then be quarantined in Beijing for a week or two. Only then, a full two months after she kissed them goodbye, will come the much-anticipated reunion with her family.

Because China’s ruling Communist Party does not allow workers to organize independently and with no free trade unions, there’s not a whisper of public complaint about labor conditions inside the bubble.

Many are doing mundane and repetitive tasks and working weeks without days off. Battalions of cleaners constantly wipe and disinfect surfaces. Hospital doctors have been re-tasked to the relatively unskilled job of taking oral swabs for the daily coronavirus tests that are mandatory for all games participants. Volunteers and guards count people in and out of venues, tracking numbers with ticks on sheets of paper. But none will be heard griping publicly about the Olympic endeavor that the Communist Party is using to showcase its rule.

The bubble has been in force from Jan. 4, a month before President Xi Jinping declared the games open. After five weeks of loop life, the most critical things workers will say is that they’re losing track of time, that days resemble each other, and that they’re longing for a break from canteen food: too bland for those from regions with cuisine laced with fiery chili peppers, too unvaried for the many who long for home cooking and comforts.

Publicly, on the other hand, everyone agrees how privileged they are to be doing their bit, no matter how small. And all say that locking them in is a small sacrifice to prevent the coronavirus from jumping the barrier to their families, friends, and everyone else outside. More than 1.3 million tests had turned up 432 positives by Day 10, but there were no reports of contamination leaking from the Olympic bubble.

Volunteer worker Dong Jingge misses her grandparents and has an unglamorous Olympic task: She guards the door of a walled-off dining space for Olympic visitors subject to extra health monitoring because they previously tested positive. She counts them in and out and asks them to disinfect their hands.

The interactions are improving her English, the student enthuses. Her highlight so far was bumping into International Olympic Committee President Thomas Bach. He gave her a small metal lapel pin of the Olympic rings.

Her mother, outside the loop, was thrilled. “Such a rare opportunity, an unforgettable moment,” she messaged when Ms. Dong posted a photo of her prize. Scheduled to also work through the Paralympic Games in March that follow the Olympics, Ms. Dong expects that her total stay inside the loop and post-loop quarantine will together add up to nearly three months.

Olympic driver Li Hong says he’s living his “dream” ferrying visitors and workers from venues on his overnight shift. He has been told to expect the equivalent of just under US$80 per day, which should add up to a tidy sum when he gets home by the end of February, after two months in the bubble.

But he’s in it for the experience, he says, not the money nor the expectation that Olympic service might look good on his membership application if he tries to join the Communist Party.