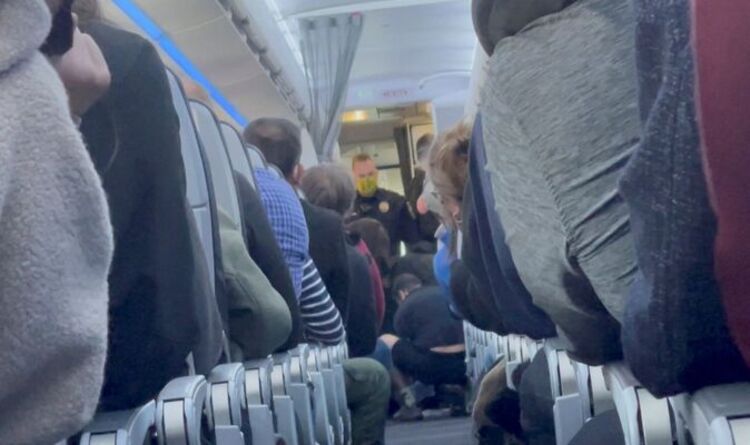 Witnesses said a flight attendant used a coffee pot to stop the passenger in his tracks while the American Airlines plane was diverted. The journey from Los Angeles to Washington DC was forced to land in Kansas City on Sunday.

Mouaz Moustafa recalled an attendant shouting at a crew member to turn on the lights before the aircraft started to lose altitude.

He said a number of passengers rushed to the front of the plane in a bid to help restrain the passenger and prevent him from breaking into the cockpit.

Mr Moustafa said: “It felt like the plane was free falling and many feared the worst because people weren’t fully aware of what was unfolding.”

Pictures and videos from inside the plane show the man being held down and FBI investigators speaking to other passengers.

Passengers look on as a man is restrained on an American Airlines flight. (Image: Twitter/@SoccerMouaz)

A man speaks to passengers after the ‘unruly’ passenger was restrained. (Image: Twitter/@SoccerMouaz)

Karen Alston was also on the plane. She said she was watching a film when the lights overhead suddenly came on and she saw a number of people rushing down the aisle towards the front of the plane.

She told the Daily Beast: “When people started standing up, I knew something was wrong.”

Fellow passenger Jake Smith said he was starting to make his way to the toilet when he saw a flight attendant running full speed down the aisle.

After the flight was diverted passengers were re-booked onto a new flight to Washington DC.

READ MORE ABOUT BRITS BEING CHARGED £100 FOR COVID TESTS

“The flight landed safely at MCI at 2.28pm local time, and law enforcement was requested to meet the flight on arrival.

“We’re grateful to our crew members, who are consistently dedicated to the safety and care of our customers and who handled the circumstances with the utmost skill and professionalism.”

Kansas City Aviation Department spokesperson Joe McBride said there was a passenger interfering with the flight crew, adding that the FBI was now dealing with the incident.

The most dangerous airspace to fly through revealed. (Image: Express)

The FBI said in a statement: “The flight was diverted due to an unruly passenger interfering with the flight crew.

“The individual has been taken into custody. No further information is available at this time.”

Meanwhile, airlines and the leasing companies controlling billions of dollars’ worth of passenger jets are drawing up contingency plans for a freeze in business with Russia if the standoff on Ukraine’s border boils over into a military conflict.

Reuters reports that US officials have warned Moscow could launch an attack on Ukraine after amassing more than 100,000 troops close its neighbour’s border with the West preparing heavy sanctions.

Aviation bosses are worried about the impact on dealings with Russian companies. Sanctions could disrupt payments to leasing firms and any retaliatory move by Moscow to restrict access to Russian airspace may throw east-west trade into chaos.

A Western source involved in drawing up scenarios told Reuters an asymmetrical Russian response is anticipated, adding the West was unlikely to restrict its own airspace first.

US carrier FedEx said on Monday it was making unspecified contingency plans.

Without access to Russia’s airways, experts say airlines face having to divert flights south while avoiding areas of tension in the Middle East – adding significant cost at a time when airlines are reeling from the pandemic.

According to Elisabeth Braw, senior fellow at the American Enterprise Institute, the situation acts as a reminder that Russia’s size and position on the aviation map gives it leverage not available to the Soviet Union when economies were less connected.

Ms Braw, writing in a column in Defense One last month, stated: “So far, Moscow hasn’t threatened to revoke overflight rights, but knows it has a phenomenal weapon at its disposal.”

This is up 16 percent from coronavirus-depressed levels in 2020 but still 37 percent below pre-crisis traffic in 2019, according to the Federal Agency for Air Transport.

US airlines have raised concerns Russia could refuse to extend overflights, disrupting connections to Asia, India and the Middle East.

As some airlines began avoiding Ukraine on Monday, leasing companies were eyeing greater risks in Russia.

He told Reuters: “So we’re focused on ensuring of how do we get around that from the payment of our rentals perspective.”

Russian companies have 980 passenger jets in service, of which 777 are leased, according to analytics firm Cirium.

Of these, two thirds, or 515 jets, with an estimated market value of about £7 billion ($10bn), are rented from foreign firms.