Ethical Today Ethical Today is your news, entertainment, lifestyle website.
Home Future Ukraine is the iceberg tip and deeper struggles. The politics of divisiveness… and talk of civil war. 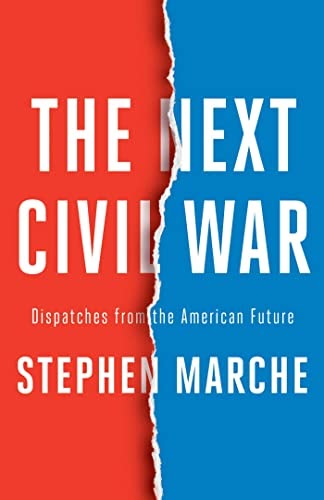 First, my FB followers already saw this, but there are reasons to suspect that a lot more is going on, in the current Ukraine Imbroglio than readily meets the eye.

Then I’ll dive into the fractious political situation in the U.S., offering some insights you’ll not see elsewhere. Perhaps… because I’m a nut and every other ‘pundit’ knows better? (I suppose that’s possible!) Or else I’m trained to step back… like a Tex Avery character… and see things from a place some distance off the cliff.

My SFnal spidey sense powers are tingling over this Ukraine crisis… and not in ways that you’ll find in headlines. For example, across the last year, several subsea fiber cables have mysteriously failed. And abruptly, recently, the Russian Navy held exercises over the very patch where several more cables from North America converge on Ireland. (Note that a command delay device can be left in place, after such a distraction. So we’re not safe when that fleet moves on.) Russian and Chinese anti-satellite tests threaten what they tell themselves is the US military’s over-dependence upon space assets. And you can be sure a flurry of recent US defense launches are related, in some degree.

Vladimir Putin’s four year springtime of easy successes, after his triumph in the 2016 U.S. elections, has been followed by a year of winter-setbacks of which we only see iceberg-tip – which might include unseen pokes by unleashed western agencies who are no longer held back by a White House quisling, retaliating for what only a fool would not call relentless acts of war by the Kremlin’s FSB.

Moreover, speaking of winter, a big ticking clock is counting down for Vlad, as an invigorated NATO will now invest heavily in energy alternatives to (at last) free Europe from Russian gas.

All of the Ukraine headlines make sense in this context, as the bluster of a deeply desperate man and regime. And desperate men can be especially dangerous! They scream “Look at me! Respect me! I am dangerous!”

Frantically, they clutch the delusion of “western cowardly decadence” that Americans, especially, have had to disprove, expensively, almost every generation since the 1770s. (Australians, too, recently proved they are not so easy to intimidate.) It is the emotional recourse of those who cannot comprehend the concept of positive sum.

And so I get to my proposal… my call for someone, somewhere, to hunt down the rights to republish… at least online… a dire warning scenario from the 1980s – Frederik Pohl’s novel THE COOL WAR. Some of you know I have touted it for years, as a hugely plausible tale of worldwide failure, that depicts all nations devolving into a relentless cycle of tit-for-tat international sabotage.

Fred was spectacularly prescient quite often, e.g. in one book he became the only author before 1990 to predict cell phones would become speaking, all-purpose digital assistants.

But the COOL WAR is what we need circulating right now! Yes, even (temporarily) in pirated form! I think the meme and lesson is that important.

Dick Cheney came to the Capitol on the anniversary of the January 6 uprising – and said he’s ‘deeply disappointed in GOP leadership. Oof. When Dick Cheney, who sold us out amid lies and theft of tens of billions of dollars, has had a bellyful of Republican turpitude and insanity, you get a scale, a metric, by which to measure the depth of depravity in today’s top GOP/confederate caste.

‘When asked for his reaction to Republican leadership’s handling of this day (January 6), Cheney — not one to mince words — said, “Well, it’s not a leadership that resembles any of the folks that I knew when I was here for 10 years — dramatically.”‘

It’s not just that the Trump-McConnell-Graham + the Fox/Putin gang are worse thieves and liars, outdoing even the infamous Cheney Iraq Logistics Scam. What I believe bothers the Cheneys and Romney etc. above all is the stupidity of threatening the very survival of an American Republic on whose arteries these parasites sucked for so long.

Killing the goose that laid their golden eggs might lead to revolution, of one sort or another. Even a mild version could shine radicalized transparency into corners they thought safely hidden. Today’s central Foxite mantra, repeated at all levels every day… “Don’t look!”… won’t work for much longer, if the Trumpites keep riling things.

Like Isoroku Yamamoto in 1941, Cheney’s clade of satiably careful parasites fears awakening a sleeping giant – the sane American majority – and uniting all of the fact professions in purposeful wrath, determined to cleanse everything with light.

But heedless of that danger – and likely propelled by blackmail – the Trumpist cult stomps on the accelerator, toward a cliff of civil war they are deluded enough to think that they can win.

This remarkable (and chilling) chart summarizes ongoing research and appraisal of the wide variety of riled up domestic extremist groups churning within the U.S., from old-fart “Oath-Keepers” to your disorganized but verbally violent incels and ‘stochastic haters.’ And many of them are resembling more and more the “Holnists” I portrayed in The Postman as the straw that broke America’s – and the world’s – back.

Want an important and cogent reminder of how vulnerable our enlightenment experiment in America is to civil division? ‘In his Farewell Address, George Washington was almost fantastically lucid about the situation the United States faces at this exact moment. “I have already intimated to you the danger of parties in the state, with particular reference to the founding of them on geographical discriminations,” he warned. “This spirit, unfortunately, is inseparable from our nature, having its root in the strongest passions of the human mind. It exists under different shapes in all governments, more or less stifled, controlled, or repressed; but, in those of the popular form, it is seen in its greatest rankness, and is truly their worst enemy.” The Founding Father saw hyper-partisanship as the greatest danger to American democracy. Almost 250 years later, he’s been proven correct.‘

This an excerpt from Stephen Marche’s latest book: The Next Civil War: Dispatches from the American Future: 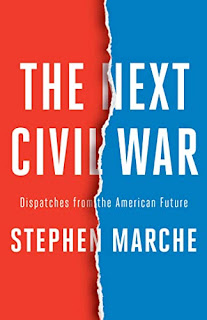 I’ve written elsewhere of how fundamental the problem is, to the fate of humanity, the planet… and possibly the galaxy! 6000 years (or much more) of brutally stupid feudalist rule cauterized most civilizations on Earth, propelled by a darwinian trap of male nature, observed in species as diverse as lions and rabbits, orcas and elephant seals.

Squint at all of them and you’ll see overlaps with feudal lords, kings, theocrats and sons of Heaven, all striving to maximize dominance and reproduction by their own sons. And we are all — all of us — descended from the harems of the men who pulled that off.
But, just a few times — perhaps only on this planet — a rare alternative emerged, tried experimentally in Periclean Athens, then da Vinci’s Florence, then Amsterdam and now succeeding against all odds, here and in other points of light, around the globe.

That alternative attractor state – with flattened/accountable hierarchies and maximized flat-fair-cooperative competition, and now moderated by female viewpoints – has proved so vastly more fecund, creative, productive, scientific, fun… and incrementally more fair… than all feudal systems, combined. It should be a no-brainer to prefer this…

…proving that the worldwide cabal of oligarchs trying to bring it down right now have (essentially) no brains. (In EXISTENCE I portray what trillionaires might do who are actually smart, and not surrounded with sycophant flatterers.)

The very same nerd professions they now wage war against – through vile agents like Fox News – will remember. If the oligarch mafia succeeds in toppling this Experiment, they will thereupon ride tumbrels wondering:

“What went wrong? In our closed circle-jerk, it looked like such a good plan!”

So go forth and convert a MAGA. I show a dozen ways how and offer some, in Polemical Judo. But you can start by quoting Washington… and Robert Heinlein.

But okay. it is a recurring concern. So let’s dive into that Civil War, stuff.

“Generals Warn Of Divided Military And Possible Civil War In Next U.S. Coup Attempt.”  In all this yammering about ‘civil war,” no one notes that Phase 8 has been going on for years, now. Indeed they are talking about a hot Phase 9. And while the Officer Corps of smart, educated heroes who won the Cold War and the War on Terror are fleeing the gone-mad Republican Party in droves, they still allow Fox News to blare in the noncom ready rooms. (Though not in the Navy!) And THAT is the way things may divide, if it gets bad. Picture that divide, and shiver. Watch your backs. 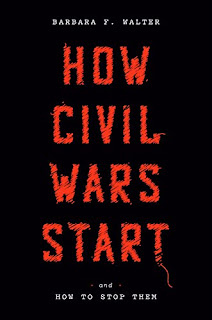 Here are a couple of “civil war sci fi novels” that we hope will stay fiction. Tears of Abraham by Sean Smith and Our War by Craig Di-Louie. For nonfiction: newly released: How Civil Wars Start: And How to Stop Them, by B. A. Walter.

Dismissing the Intel/FBI/Military officer corps as “deep state” traitors is despicable. The quarter of a million heroes who helped win the Cold War and the War on Terror and who put facts before dogma.

But attacking Gen. Mark Milley as a “procurement bureaucrat” especially chaps my hide. It shows dismal ignorance of the badges that he earned, visible in photos. Paratrooper/Airborne. Ranger. Many action & theater commendations. His home unit is the “band of brothers” 101st Airborne. And the noblest of them all, the Combat Infantryman” insignia. Also, most senior officers have either a PhD or 2-3 masters or equivalents. (Read that again, to the tune of Gilbert and Sullivan’s “Major General” tune!)

They are well-versed in science and fact, making them desperately concerned about climate change and pandemics and the blatant meddling of foreign despots in one of our political parties. For example, they know the Russians are building 12 huge new military bases to control the melting Arctic. And those spewing ‘deep state” slanders at them are not worthy to shine their boots.

Those hurling ‘traitor’ at such heroes should use the word into a mirror.

And of course the same twits attack every other fact-using profession, from science, teaching, medicine and law to journalism. Name one exception to the Foxite all-out war on all fact people. Make that challenge viral.

Significant and consistent: The rise and fall of rationality in language: “The post-truth era has taken many by surprise. Here, we use massive language analysis to demonstrate that the rise of fact-free argumentation may perhaps be understood as part of a deeper change. After the year 1850, the use of sentiment-laden words in Google Books declined systematically, while the use of words associated with fact-based argumentation rose steadily. This pattern reversed in the 1980s, and this change accelerated around 2007, when across languages, the frequency of fact-related words dropped while emotion-laden language surged, a trend paralleled by a shift from collectivistic to individualistic language.”

This is reflected by the way the entire Mad Right and large swathes of the far-left are obsessed with SYMBOLISM… issues that cannot be refuted by facts and have little to do with achieving palpable outcomes, but are aimed at riling up client groups. (Example: the absolute lack of any positive metrics should have refuted the “supply side” cult long ago.)

It’s why every night Fox & cohorts attack the nerdy fact-centered professions, now including the US military officer corps… and why I wrote the FACT Act.

While this semantic analysis is disturbing confirmation… it also points to possible tactics to reverse the trend.