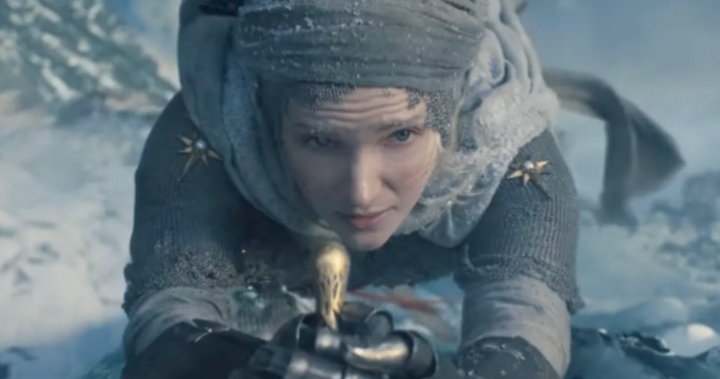 Amazon Studios released a first teaser trailer for its blockbuster Lord of the Rings television series The Lord of the Rings: The Rings of Power during Super Bowl LVI, giving a first good look at the upcoming prequel series.

First up is the city of Númenor — Tolkien’s technologically advanced version of Atlantis that ruled in “the Second Age” of Middle-earth’s history. While The Lord of the Rings books take place in what Tolkien considered “the Third Age,” the new series predates the books by thousands of years.

We’re also introduced to the Hobbit’s ancestors, known as the Harfoot. The series has committed to fully examining what came before Frodo, Aragorn and Bilbo, and we’re given a glimpse of a Harfoot character that muses about leaving her nomadic tribe — surely making her one of Bilbo and Frodo’s ancestors.

She begs the question: “Haven’t you ever wondered what else is out there? There’s wonders in this world beyond our wandering. I can feel it!”

We also get glimpses of a young Galadriel, played by Morfydd Clark, climbing a massive frozen waterfall, while a presumably stranded Halbrand (Charlie Vickers) floats on a raft in the ocean.

There are brief glimpses of orcs, elves, and dwarves throughout the trailer, and an ominous scene that shows an almost-naked character surrounded by flames, as well as a human hand holding what appears to be a hand of a Harfoot.

The new series is thought to be the most expensive television show ever made, and it shows. The rich elven locations and sprawling city of Númenor are a special effect feast for the eyes, and the costumes have only become more elaborate and rich since the movie trilogy.

‘The Lord Of The Rings: The Rings Of Power’ will premiere on Prime Video on Sept. 2. New episodes will be released weekly.