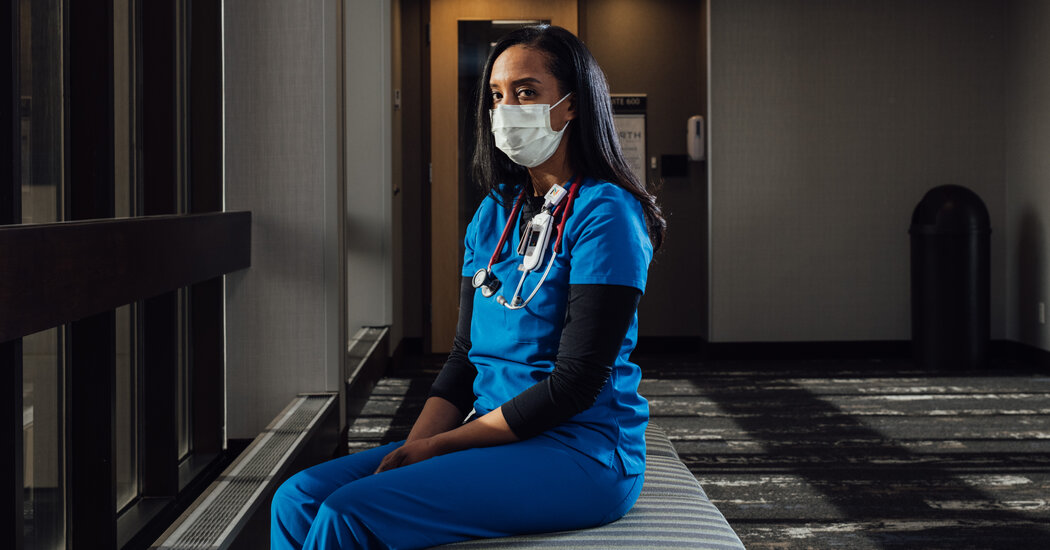 For at least three decades, hospitals across the United States have followed a model that aims to match nurses precisely to the number of occupied beds. It’s a guessing game that has charge nurses performing daily tallies and hospital administrators anticipating the seasonal movements of illness and people — winter flus and migrating retirees. Many hospitals don’t offer nurses clear paths toward career advancement or pay increases. Depending on demand, they may trade nurses between units. When there are shortages throughout the hospital, they will send out emails and text messages asking nurses to come in and take an extra 12-hour shift. And when the shortages are too great, hospitals turn to travelers.

Even before the pandemic, there were many reasons to hire travelers. Nurses would be brought in for a season, a maternity leave or the opening of a new department. This kind of gig work grew increasingly common, and from 2009 to 2019, according to data from Staffing Industry Analysts, revenue in the travel industry tripled, reflecting a work force that was already in flux. There are hundreds of staffing agencies in the United States — national agencies, regional agencies, agencies that specialize in bringing in nurses from other countries, agencies that send American nurses abroad. In mid-March 2020, there were over 12,000 job opportunities for traveling nurses, more than twice the number in 2019.

Then, as the coronavirus spread, demand came from every corner. By December 2020, there were more than 30,000 open positions for travelers. And with the help of federal dollars — from the CARES Act Provider-Relief Funds and the American Rescue Plan — their salaries started climbing. Job listings in Fargo, N.D., advertised positions for $8,000 a week. In New York, travelers could make $10,000 or more. The average salary of a staff nurse in Texas is about $75,000; a traveler could make that in months.

Nurses often refer to their jobs as a calling — a vocation that is not, at its core, about money. At the same time, nurses have spent years protesting their long hours and nurse-to-patient ratios. In 2018 alone, there were protests in California, Michigan, New York, Pennsylvania and several other states. When the pandemic hit and travel positions opened up in hospitals all over the country, nurses suddenly had more options than ever. They could continue serving patients, continue working grueling hours in frantic conditions, but they would be paid well for it. Travelers were valued. Their work was in demand. The money would be enough that after a few weeks or months on the job, they could go home and recover.

Hospital associations were already beginning to see the steep costs of these workers, but they had little choice in the matter. The shortages were too severe, and they would only get worse. In July 2020, Texas established a statewide emergency staffing system, coordinated by select regional advisory councils. The state has put $7 billion in relief funds toward supplementing staffing, which has allowed hospitals like Northwest to attract travel nurses without shouldering the full cost. “The problem is that their salaries were so much higher than our employee salaries,” said Brian Weis, the chief medical officer at Northwest. “Our employed nurses were doing the same job, but they’re saying, ‘Why are we getting paid a fraction of what these nurses are?’”

The Future of Work

Dive into the magazine’s annual exploration of the ways in which work, and our lives with it, is changing.

The following year, the demand for travel nursing broke loose from Covid. In April and May 2021, as case counts dipped, hospital requests for travel nurses only grew exponentially. “They now know what pent-up demand does to a health care system, and it’s not healthy,” said April Hansen, the group president at Aya Healthcare, one of the largest providers of travel nurses in the country. “If you look at our demand today, it looks like our demand pre-Covid in terms of specialties: med surge, telemetry, I.C.U., emergency room, surgical. It’s just the volume that is being asked for in every specialty.”

It isn’t the traveling-nurse boom alone that has transformed the market. There are also more job opportunities beyond the bedside than ever. Nurse practitioners treat patients in doctors’ offices; insurance companies employ thousands of nurses; Microsoft and Amazon have hundreds of open nursing jobs. Today, only 54 percent of the country’s registered nurses work in hospitals. “There was competition for talent before the pandemic,” Hansen said. “But the pandemic took a small crack and made it as wide as the Grand Canyon.”