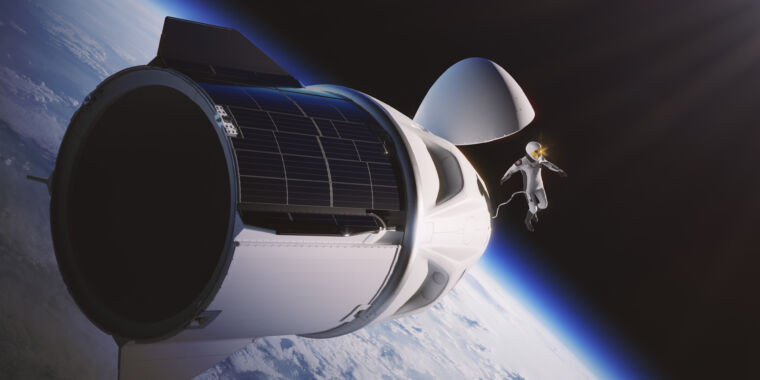 One of the most visually appealing Super Bowl advertisements on Sunday night starred Matthew McConaughey dressed as an astronaut. The advertisement begins with suggestive images of McConaughey in space only to find him in a hot air balloon.

“It’s not time to escape, it’s time to engage,” McConaughey says as his balloon traverses green countryside, cityscapes, and a wedding. “So while the others look to the Metaverse and Mars, let’s stay here and restore ours. The new frontier, it ain’t rocket science. It’s right here.”

The ad ends with a hashtag, #TeamEarth, and was evidently bought by Salesforce to burnish its image as a company working for the good of humanity and our planet. Consultants apparently convinced Salesforce the best way to do this was by shaming billionaires who are interested in and investing in space. Which is interesting, given that Salesforce CEO Marc Benioff is an investor in SpaceX and has said, “Space is a huge category that we should invest in.”

This insincerity aside, the fact that this advertisement ran during the Super Bowl and chose space exploration as its target should tell us something about the present public temperament toward rockets and billionaires.

The rising tide of billionaire angst has peaked during the last year—a watershed moment for private spaceflight. During the last half-century, more than 95 percent of human flights into space have been undertaken by government astronauts on government-designed and funded vehicles. From this point forward, it seems likely that 95 percent of human spaceflights over the next half-century, if not more, will take place on privately built vehicles by private citizens.

But the public has not perceived the rise of private spaceflight as the democratization of space, however, or as a good thing. Rather, the much public has seen Sir Richard Branson riding his Virgin Galactic rocket to space, Jeff Bezos riding his Blue Origin rocket to space, and Elon Musk riding … well Elon doesn’t really seem all that personally driven to go space.

Many Americans are upset that Musk, Bezos, and other billionaires are so damned rich; these Americans see the billionaire infatuation with space as “boys in their toys” or an effort to escape the planet Earth; and they worry that the rich people are playing with rockets while the planet burns. The Salesforce ad taps into all of this frustration.

But another billionaire has ridden on Musk’s rocket: Jared Isaacman, who is the founder of the Shift4 payment-processing company and also a pilot. And Isaacman is well aware of this frustration. Last year, he purchased and commanded the first private orbital spaceflight in history, dubbed Inspiration4. For this Crew Dragon flight, Isaacman invited a cancer survivor, a scientist-educator, and one lucky raffle winner to join him, all while raising more than $200 million for St. Jude Children’s Research Hospital.

On Monday, Isaacman announced that he enjoyed the experience so much that he is purchasing three more flights on SpaceX vehicles into orbit. Two will be aboard the Crew Dragon spacecraft, and the third will be the first human spaceflight on SpaceX’s Starship vehicle. Isaacman is calling this initiative the “Polaris Program.”

The first flight will launch no earlier than November 2022 from Kennedy Space Center. It will carry Isaacman’s business partner Scott Poteet and SpaceX engineers Sarah Gillis and Anna Menon. During this “Dawn” mission, the four will fly inside a Crew Dragon and seek to break the altitude record for an Earth-orbit mission. That record is 1,379 km (856.9 miles) and was set by Gemini 11 in 1966. The mission will allow the astronauts to test a higher-radiation environment and, of course, see the Earth from the loftiest perspective since the Apollo missions a half-century ago. The commander of Gemini 11, Pete Conrad, called the view from up there “utterly fantastic.”

The Dawn mission will also conduct a spacewalk, with one or more of the astronauts venturing outside the depressurized capsule in suits linked by umbilicals to the Crew Dragon spacecraft. These suits will be an upgraded version of the current pressure suits that astronauts wear during ascent and entry of Crew Dragon missions.

Isaacman said he wants to use private missions like this to further the exploration of space. He cited spacesuits as an example. In the movies, he said, astronauts quickly don a spacesuit and run out an airlock. That’s not how it presently works; NASA astronauts typically spend hours putting on their spacesuits and depressurizing before going outside the space station. “If we can figure out a way to expedite the EVA process, that will have real value,” Isaacman said.

Let’s be honest. The Polaris missions are happening because Jared Isaacman is rich and really wants to go back to space again. And again. And again. But he also seems determined to use these missions to move spaceflight from rare, ultra-expensive, and cumbersome to frequent, lower-cost, and streamlined. He wants to see hundreds and then thousands of people living and working in space, and he shares Elon Musk’s vision of one day establishing a settlement on Mars.

“We only want to see progress,” he said. “The US Army once delivered our mail. If it had continued to stay that way, we probably wouldn’t have the ability now to walk up to an airport with like an hour notice and fly down to Orlando to see Disney World for a few hundred dollars.”

Isaacman also understands the kind of backlash that led to the broadcast of the Salesforce ad. In an interview with Ars, he said he takes this responsibility seriously. He wants the public to understand why going into space is important for myriad reasons, such as obtaining natural resources in space so that we can preserve them on Earth.

“I’m very aware of it,” he said. “It was an important component of the Inspiration4 story from the beginning. It is not lost on me that if SpaceX and the commercial space industry want to achieve their objectives, including getting to Mars, it’s going to take a lot of public support along the way. It’s important to deliver a message that what we’re trying to accomplish in space is important and will absolutely have a real benefit back here on Earth.”