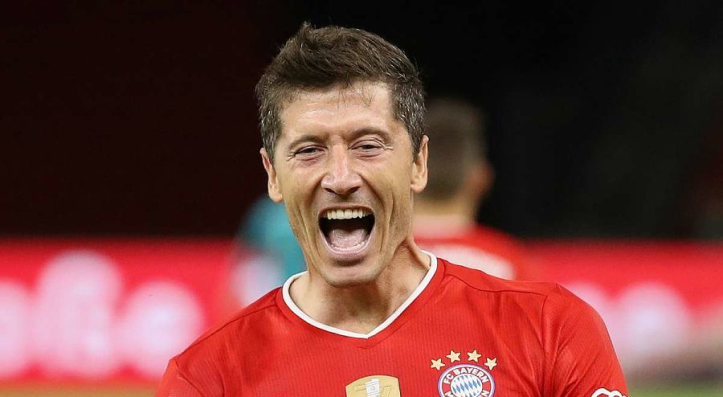 The 2021/22 European Golden Shoe race is under way, with the continent’s most prolific goalscorers all vying to win one of football’s most prestigious individual awards.

Bayern striker Robert Lewandowski saw off the challenge of Lionel Messi and Cristiano Ronaldo to finish at the top of the European Golden Shoe rankings last season.

Out of contract in 2022: The best free agents available on a Bosman next year

Lewandowski scored an astonishing 41 league goals from 29 appearances, giving him 82 Golden Shoe points and the highest winning score since Ronaldo in 2014/15.

Manchester United star Ronaldo and Messi – who has moved from Barcelona to PSG – both entered the new campaign expecting to challenge again in the standings for the most goals in Europe.

Messi’s PSG team-mate Kylian Mbappe and a fellow young star in Erling Haaland were also expected to be in the mix to top the Golden Shoe rankings and take the crown from Lewandowski.

Along with Ronaldo, Romelu Lukaku, Harry Kane and Mohamed Salah started the season as the top Premier League candidates, though surprise winners have also emerged in the past.

Keep an eye on this page throughout the 2021/22 season for regular updates on the European Golden Shoe standings.

Robert Lewandowski is closing in on another European Golden Shoe title as he now leads his main rivals by seven goals at the top of the standings.

With 26 goals in the Bundesliga, the Bayern striker has the highest goal total in all of Europe’s top five major leagues.

Even though Bayern had an awful 4-2 loss at the hands of Bochum on Saturday, it was Lewandowski who scored both of his side’s goals.

That meant he extended his lead at the top of the European golden boot standings and looks primed to win a second straight title.

His closest challengers in the race to score the most goals in Europe for 2021/22 are former winner Ciro Immobile and Bayer Leverkusen forward Patrik Schick.

Lazio star Immobile has 19 goals and sits top of the Serie A goalscoring charts ahead of another contender in the Golden Shoe race, Dusan Vlahovic, who has 18 goals.

With 17 strikes to his name, Real Madrid forward Karim Benzema leads the Primera Division scoring list and is the Spanish top-flight’s top candidate to win the Golden Shoe.

Mohamed Salah tops the Premier League standings but even with 16 goals this season he is now a huge 10 behind in-form Lewandowski.

Despite the PSG squad being full of stars, Wissam Ben Yedder of Monaco has the most goals in Ligue 1 this season with 14. That tally, though, is 12 off the pace so the long wait for the French league to produce a Golden Shoe winner is set to continue.

Some of the other candidates who are not leading their domestic goalscoring charts are Erling Haaland (16), Anthony Modeste (14) and Raul de Tomas (13).

For the time being our table below tracking the European Golden Shoe standings will only list players from the top five European leagues, where the winner is most likely to emerge from.

Who are the previous European Golden Shoe winners?

Lionel Messi has won the most European Golden Shoe titles.

The PSG forward has triumphed on six occasions, most recently in 2018/19 for Barcelona.

Cristiano Ronaldo is his closest challenger with four career wins, though the Man Utd attacker has not come out on top since 2014/15 when he was at Real Madrid.

Messi holds the record for most goals and points in a season as well. He remarkably scored 50 goals in 2011/12, earning himself 100 points.

Ronaldo has come closest to breaking that, scoring 48 goals for 96 points when he last won the crown more than six years ago.

Argentina forward Messi is the only player in European Golden Shoe history to win the title three years in a row, doing so from 2016/17 until 2018/19.

Ronaldo, though, is one of only four players to have won the title with different clubs. The others are Luis Suarez, Diego Forlan and Mario Jardel.

Robert Lewandowski became the first Bundesliga winner since 1972 last season, with his 41 goals being the best tally for six seasons.

That came after Ciro Immobile won the 2019/20 European Golden Shoe, scoring 36 goals for Lazio in a tremendous Serie A season.

It was his first title, with the striker becoming the first Serie A player to have the most goals in Europe since Francesco Totti triumphed for Lazio‘s rivals Roma in 2006/07.

Ligue 1 has not produced a winner since Josip Skoblar in 1971, a statistic the likes of Messi and Mbappe are hoping to change soon.

What are the European Golden Shoe rules and weightings?

Only league goals are eligible for the European Golden Shoe, with each strike earning points in a weighted system depending on the quality of league.

The five elite leagues – Premier League, La Liga, Bundesliga, Serie A and Ligue 1 – all carry a weighting of 2, meaning that a player will be awarded two points for every goal they score in these competitions.

That was not always the case in the European Golden Shoe. From 1968 until 1991, the award simply went to the highest goalscorer on the continent, regardless of the strength of league.

Awards were not initially handed out between 1991 until 1996, when the new system came into force. Since then, only two players playing outside what were the five highest-ranked leagues at the time have ever won the Golden Shoe – Henrik Larsson (2000/01) and Mario Jardel (2001/02).

The Golden Shoe has been tied in the past, most recently when Suarez and Ronaldo shared the honour in 2013/14. Going forward, though, the award will be given to the player who has played the fewest minutes if two of them end up on the same number of points.

Last season’s standings can be found here and if you want to see the final results for the 2019/20 European Golden Shoe, follow this link.