Ethical Today Ethical Today is your news, entertainment, lifestyle website.
Home Future How not to write about HyFlex or online learning 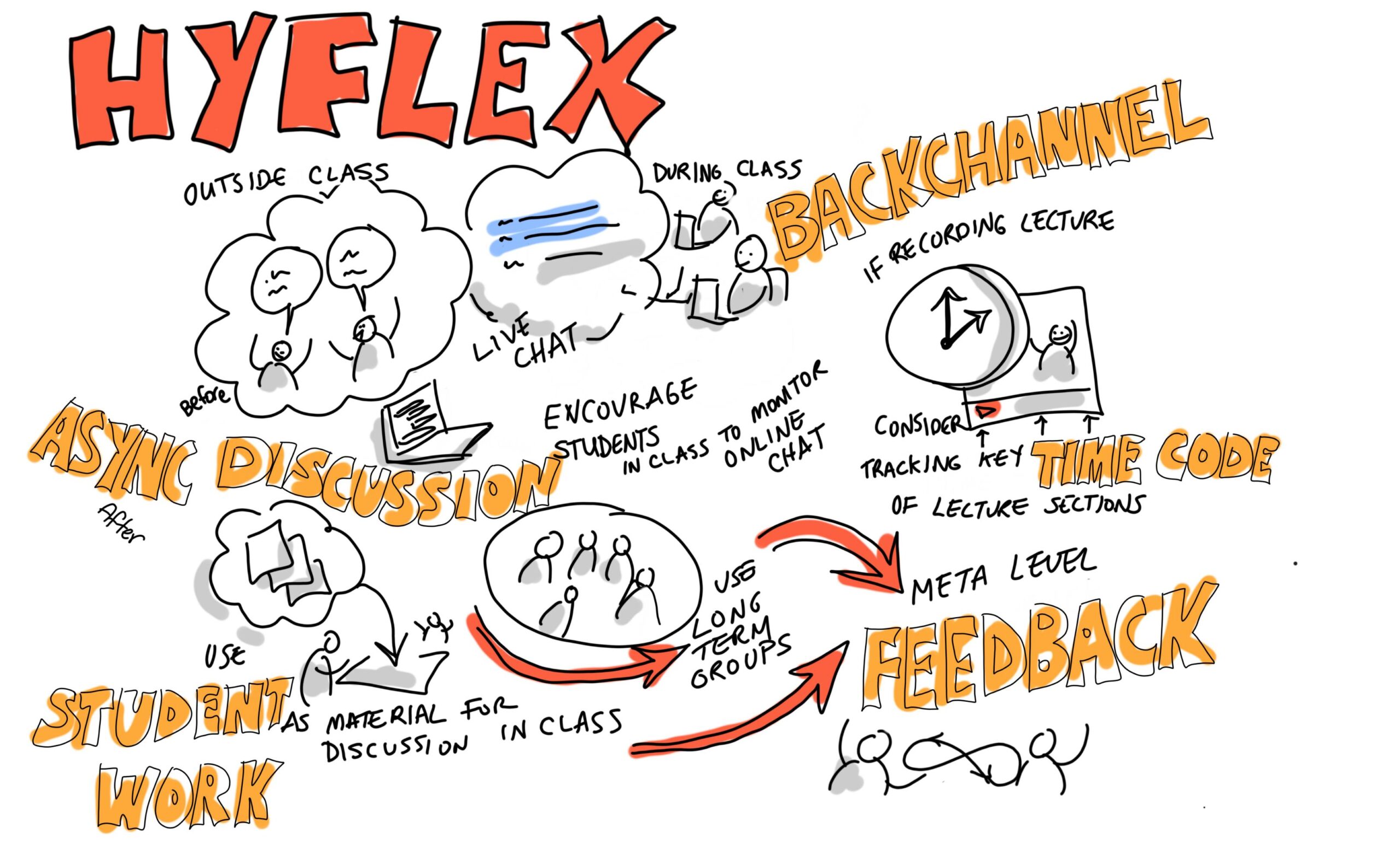 As higher ed slides into year three of the pandemic, some of us reflect on what we’ve learned from the experience.  These reflections are important and can be useful, but too many repeat popular mistakes and don’t help us as we work and plan ahead.

Today’s case in point is an odd article in Insider Higher Ed.  “HyFlex Is Not the Future of Learning” starts off by complaining about that form of teaching, then becomes a general complaint about online learning.

I’m writing not to pick on the column for its own sake.  Instead, as I’ve done before, I want to identify some of its tropes and arguments as ones that are visible elsewhere, and which we need to get past.

A quick summary: Loyola University New Orleans English professor Christopher Schaberg describes hearing a faculty colleague present on some of the difficulties in teaching in HyFlex style.  Schaberg describes HyFlex, then argues for its problems, pointing to popular dislike of it at his institution.  Next he praises the on-campus experience, in contrast to online learning.

So what went wrong?

To begin with, the article fails to connect with or even name anyone else’s work on the subject.  I’ve seen this for decades in the ed tech space, commentators speaking or writing as if they’ve been the first to come across or reflect on a given technology or problem.  It’s a weird slip, and one which looks less excusable every year as the sheer amount of scholarship and general media about ed tech keeps growing.   For example, it’s easy to find this free and open ebook on HyFlex co-edited by Brian Beatty, who coined the term, did important work on it, and is unnamed in Schaberg’s piece.  Our Future Trends Forum session connected Beatty to hundreds of people, and is freely available on YouTube:

If that’s too much content, EDUCAUSE has a two-page, concise intro.    My point is that academic writing about academic technology should do a better job of acting like they’re entering ongoing academic discussions.

A second problem comes in the article’s view of who’s involved in post-secondary teaching.  Professor Schaberg is the only named person, and represents the (small) tenured faculty population.  He also includes students, which I applaud.  There seem to be other faculty involved in conversations, as committee members.

Missing is any faculty member without tenure, including adjuncts and contract professors – i.e., the majority of the American professoriate.  Teaching HyFlex as a tenured professor is a different thing than teaching that way for below minimum wage, and with less support in other forms.

Speaking of support, no staff appear in the article.  There are no technicians to install, test, maintain, and troubleshoot the microphones, speakers, screens, and cameras needed for live videoconferencing.  No instructional designers appear.  There is no mention of help desks to assist the professor and his students. The article’s author is apparently alone in attempting HyFlex teaching.  If that’s true, he has my full sympathy, should definitely call for more support, and write about this in the article.  If that support is actually present, just invisible in the text, then the human beings who help make ed tech happen should appear.

Again, I’m not writing here to pick on this one article.  It’s because these gaps in writing about the reality of academic labor – the enormous population of off-tenure-track faculty, the importance of support staff – are all too common in conversations about higher ed.  Including those within academia, where we should know better.

A third problem is the old one of taking a piece for a whole.  The article discussed HyFlex in higher education in contrast with face to face learning, which the author praises. I don’t object to that praise, as I also appreciate the in-person education experience. I also enjoyed the DeLillo passage. The problem is that the piece cites a liberal arts campus as an example of post-secondary education as a whole.

A moment’s thought shows the problem here.  Residential liberal arts colleges number around 100 in the United States. That’s about 2.5% of the number of American colleges and universities now operating.  I’d like to be generous and add schools which offer some form of residential liberal education, such as those with embedded programs within larger universities, and I’d still only have a minority.   Commuter colleges are left out. Schools where most students don’t live on site aren’t mentioned.  Put another way, a charming liberal arts campus is indeed a fine emblem for higher ed, but only for a slice of it.

One more problem occurs and it’s one I found disorienting at first.  The article starts by criticizing HyFlex, yet the second half might not be about that.  Listen to the problems Schaberg identifies in that final section: the digital divide; students not having a good physical location to be on camera; missing the physical campus.  These aren’t HyFlex problems, but issues with online teaching.

Listen to this description of class problems:

students and instructors alike seem to have endless tasks: a constant deluge of boxes to tick, videos to watch, assessments to mark. They pile up in the timeless void of the phone screen or the computer desktop. Midnight deadlines become an infinite regress. And while coursework would seem to be tidily organized under our learning management apps, in files and folders and subfolders, all of it pulls everyone involved further away from the college experience.

First, those are class design problems, and need to be solved before a class starts. Second, that describes online learning. There’s nothing inherently HyFlex about it.  Same with this passage:

higher education is trumpeted as a grid of apps piped into everyone’s personal phones. Instructors are directed to “deliver” their lessons in discrete chunks and units.

At one point the professor refers to “the vague ontology of remote learning.”  Setting aside my critique of the usefulness of that phrase (it’s not vague at all), it’s again about, well, remote learning.

I can write to this not only because I’ve researched these issues for decades, but also because I’ve taught HyFlex classes and led hybrid conference sessions for years.  I think the first time was in the late 1990s, when I gave an in-person talk to educators in northern Sweden, and dozens of folks from across Scandinavia joined us through a virtual world and live video.  As a presenter, it felt odd… then it clicked, like peering out through bifocals, knowing I can shift between them.  Or like being in front of a room that’s very rectangular and extending to my left and right. I treat them as a unitary thing, but I make sure to address both sides or levels.

Over the past two years I’ve taught a series of HyFlex seminars at Georgetown.  For them of them I was on campus in a well-equipped classroom. Some students were with me, in person, while others beamed in from other locations. I made a point of hailing both subpopulations, giving extra attention to whichever felt less engaged at a given time.  We used Zoom for video and I made a point of keeping the chat open, responding to or reading from the chat to boost comments and students.  I would DM remote learners support, questions, or signs of care. Together we used other software for more synthetic work: Google Jamboard, Google Docs, Miro, etc.

At times I taught from home or on the road. Some students met in that fine classroom while others were remote, like me. Again, I had to do that bifocal thing, but from the remote vantage point. I caught in-person cues between people in person, on camera and responded to them. I gave more attention to those who seemed not as fully present.

I’ll write about this another time, with more details, if folks are interested. The key points are 1) it worked, and 2) the Inside Higher Ed piece stops being about HyFlex reality halfway through.  If the author wanted to complain about online learning in general, he should have written two articles, or else flagged this transition.  What’s the general error I find here?  A lack of analytical precision in writing about ed tech.  In 2022, especially after two years where all of higher ed was immersed in the field, we can do better.

To sum up: we learn from this four mistakes to avoid in writing about educational technology in higher ed. We should openly engage with ongoing debates, describe the actual human labor involved in teaching, not mistake one bit of higher ed for the whole, and be precise in our description and analysis of ed tech.

I write this as colleges and universities reel from COVID and too many struggle to maintain themselves, while academia’s reputation declines and enrollment drops. We can and should have better conversations about higher ed. Given the stakes, we shouldn’t do otherwise.