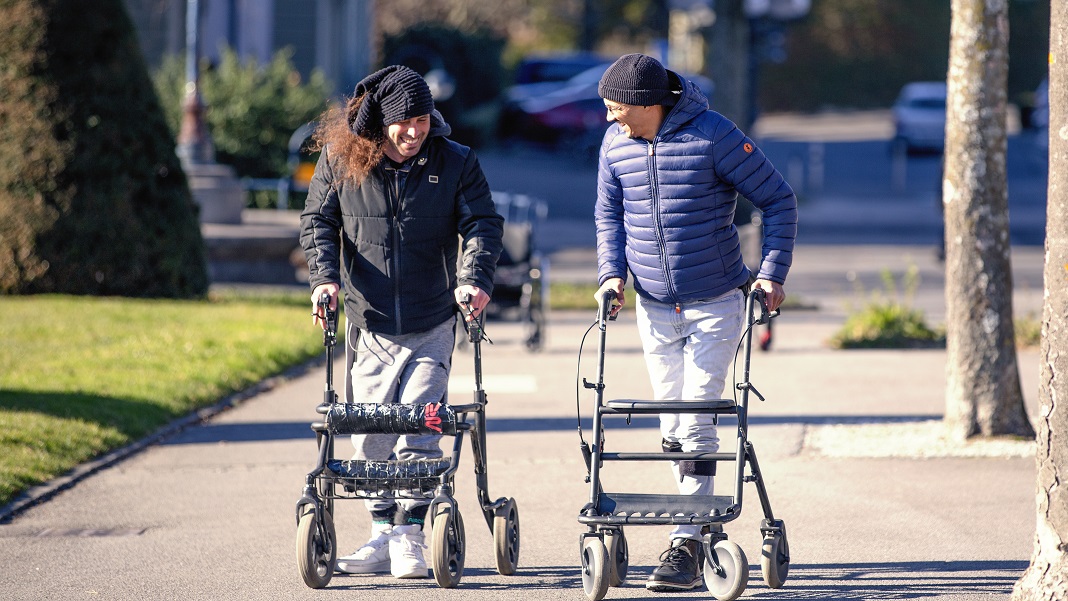 Michel Roccati never thought he’d walk again, much less swim, cycle, or paddle a kayak. A terrifying motorcycle collision in 2017 damaged his spinal cord, leaving him completely paralyzed from the waist down.

Yet on a cold, snowy day last December in Lausanne, Switzerland, he took his first step outside—with the help of a walker—since his accident. His aid? A new spinal cord implant that bridges signals from the brain to his lower muscles, hopping over damaged portions to restore movement. All it took was one day of stimulation.

Michel is part of a larger trial of a new, personalized spinal cord implant. Invented by Dr. Gregoire Courtine and colleagues at the Swiss Federal Institute of Technology in Lausanne (EPFL), the implant is the first to specifically mimic electrical signals from the brain to control lower body movement.

“Our stimulation algorithms are still based on imitating nature,” said Courtine.

Unlike previous spinal cord stimulators, the implanted electrodes are placed directly onto the spinal cord, allowing access to different neurons that control lower body muscle groups. With the help of a tablet, the implants can be adjusted to support a given activity—stand, walk, swim, bike—letting people stimulate their spinal cord neurons like keys on a piano.

It worked like magic. Within months, Michel and two other men with complete paralysis were able to cruise the streets of Lausanne in a Segway-like walker.

“It’s really exciting,” said Dr. Megan Gill at the Mayo Clinic, who works on electrical stimulation devices but was not involved in the study, to Nature.

Courtine is no stranger to spinal cord stimulation. Back in 2018, his team, working with longtime collaborator and neurosurgeon Dr. Jocelyne Bloch, dazzled the field with a stimulator that allowed a paralyzed man to stand up from his wheelchair and take a step.

But like the banks of a collapsed bridge, the neural infrastructure below the damaged area remains generally intact. By artificially stimulating these nerve cells, it may be possible to recreate the electrical signals that govern our muscles.

Three decades of research have found that stimulation can “restore walking” after spinal cord injury, the authors said. But these remain proofs of concept, and have struggled with giving paralyzed people back their everyday motor functions or aiding recovery.

The team wanted to achieve both. For the study, published in Nature Medicine, they started with an existing stimulator generally used to treat chronic pain, but soon ran into a roadblock. The stimulators, though well-tested, weren’t specific enough.

Instead, the team redesigned the electrode leads. They fabricated paddles, each arranged with 16 electrodes that specifically target parts of the spinal cord that control the leg and lower-trunk movements. Finding where to optimally put the electrodes was another challenge. The team imaged the spinal cord and nerve cells of 27 healthy volunteers and constructed an “average” spinal cord. Next, using a computer simulation program (with the awesome name Sim4Life), they mapped out electrode placements that optimally stimulate key nerve targets for lower-body movement.

Then came the software challenge.

The team balked at the usual—but far easier—convention of constant stimulation, as the pattern veers far from natural neurobiological signals. Rather, they decided to program different stimulation patterns to aid diverse activities.

Previous studies have found that different activities recruit specific bundles of nerve fibers from a part of the spinal cord called the dorsal root. Like cooking recipes, these ensembles can then activate different motor “recipes.” By playing with the timing and sequence of stimulation, it’s then possible to mimic the neurobiology of movement when the original biological hardware is destroyed.

Once the implant was in place—near the lower back and tailbone—the team next connected it to a Medtronic device inside the abdomen. FDA-approved, the device is generally used for deep brain stimulation, but was co-opted here to help the participants control stimulation at will. Add in a tablet and a simple clicker, and they could easily switch between different stimulation patterns to support an activity—standing, walking, swimming, and so on. The setup took just an hour.

The results were almost immediate.

Within a day, the participants could independently take a few steps on the treadmill with body weight support. Three days later, their gait improved and they walked over normal ground, also with support. Two out of three participants—who previously had no control over their legs—were able to change the length of their step when asked to do so, showing that the device bridged their brains and intentions with actual movement.

In all, they walked over 300 independent steps in just the first day of stimulation.

A Whole New World of Movement

After five months “performance improved dramatically,” the authors said. All three people were able to sustain their own weight, standing independently in their daily lives. With the help of a walker, they could easily stroll for six minutes without any other assistance. Michel was even able to climb up stairs with minimum support.

The trio celebrated their newfound freedom. With the simulator helping with their trunk position—aka “core strength” and posture—they were able to enjoy everyday life. Standing while sipping a drink at a bar. Paddling a kayak on a lake. Taking a lap in the pool.

The stimulation further helped with muscle recovery. All three men found a boost in their leg and trunk muscle mass, and two were eventually able to control some muscle function even without stimulation.

The results, though fascinating, remain preliminary. Courtine and collaborator neurosurgeon Dr. Jocelyne Bloch dream of a “library” of electrodes to target spinal cord injuries at different anatomical and injury levels.

To Dr. Reggie Edgerton, a specialist in the field, the work is “unprecedented” in that it combines top-line implants with neurobiology, and a sprinkling of intuition and ingenuity. “The ability to integrate all of these advanced technologies in a human subject over a period of months is unique and impressive,” he said. This will give people with spinal cord injuries “reason to have a lot of hope.”

The results are just the first glimpse of a larger study. The team was quick to point out that the participants didn’t completely regain natural movements. Their gait, even with practice, remained clumsy. The implant requires spinal cord surgery, a technically challenging procedure that limits the number of capable neurosurgeons, and may come with a high price tag.

The team is already planning the next steps, for example, allowing people to directly control the implant from a smartwatch or phone. Because diverse motor programs depend on different stimulation algorithms, the team is also tapping AI and cloud-based computing to develop additional stimulation “recipes.”

As for Michel, he’s enjoying life. After nine months in Lausanne, he’s now happily back home. “I’ve been through some pretty intense training in the past few months, and I’ve set myself a series of goals,” he said. But what’s most emotional for him, he said, is that “I see the improvement every day.”