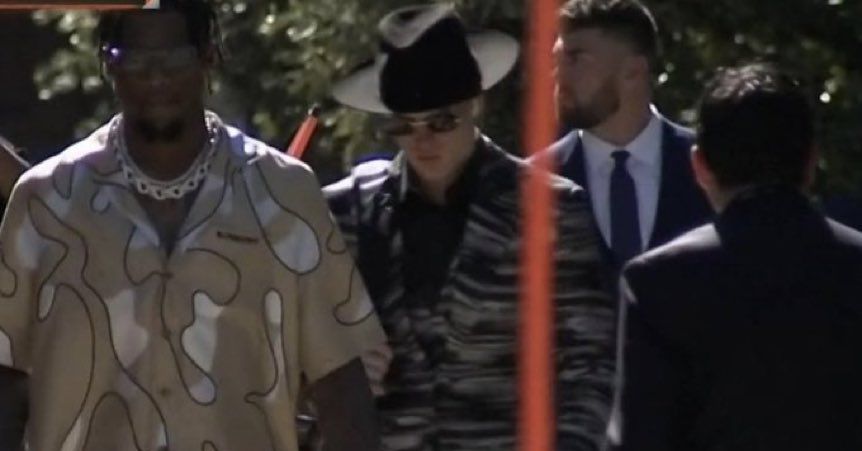 Joe Burrow is turning into a fashion icon before our eyes. The Cincinnati Bengals quarterback has been getting plenty of attention for his outfits during the Bengals’ run to Super Bowl LVI, whether he’s rocking cool sunglasses, showing off his jewelry, or doing a subtle homage to The Rock’s most iconic look.

You knew Burrow was going to drop some heat before The Big Game™ and he didn’t let us down. Burrow showed up to the Super Bowl wearing a cool suit with a cool hat. He looked like a man who had confidence and swagger heading into the biggest game of his life.

Here’s what Burrow wore into the stadium ahead of the Super Bowl:

There’s was only one problem: the Bengals lost. After the Rams won Super Bowl LVI, 23-20, Burrow had to head home in his suit. An outfit that looked awesome going into the stadium suddenly looked pretty sad.

Did this man try to dress like an actual Bengal before leading the Bengals to the Super Bowl? He’s dressed like Chester Cheetah’s shady best friend.

There are not many guys in the NFL who could pull off that look, but Burrow never lets us down. The loud fashion choices are just a small part of what makes Burrow seem so effortlessly cool, a quality that certainly seems to endear him to his teammates.

That suit was always going to look a lot better if the Bengals won. They didn’t. Sorry, Joe.