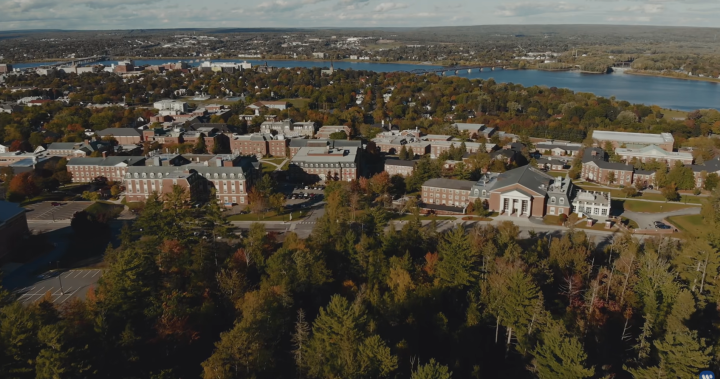 Single The Joker And The Queen was first released by Sheeran in October 2021, but a new version of the song featuring Swift was released last night.

The new music video featured a view that may be familiar to East Coasters.

Thirty-two seconds into the video, a shot overlooks the Fredericton campus of the University of New Brunswick.

The shot looks towards the St. John River.

Yes, that’s a shot of the @UNBFredericton campus in the new Ed Sheeran and Taylor Swift music video!

At 00:32, a brief shot overlooks the Fredericton campus of the University of New Brunswick – looking towards the St. John River. https://t.co/4ffNQyucB9 pic.twitter.com/CTG4ViB9e8

Knappe said on Friday it was “surreal” to see his footage used in the A-listers’ video.

“It’s pretty amazing. It proves how beautiful the city is and the campus in front of it,” he said.

Born and raised in Fredericton, he owns a freelance business and has uploaded many clips to a service that distributes them as stock footage.

This is the first time he’s seen anything he shot in a music video.

“Even though I was sure it was mine, I still had to be 100 per cent. I was going through frame-by-frame making sure it was the one I uploaded and sure enough, it was,” Knappe said.

“That was at like 11:30 last night and I haven’t really gotten much sleep since. It was pretty exciting.”

What most people may not notice, Knappe said there’s a glitch in the shot that’s always bugged him.

“I don’t know what it is, it’s either the camera goes down a little bit… it’s sudden, it’s not gradual and it’s the last millisecond of the clip,” he said.

“I see it every single time. That part of the clip actually made it into the music video, which is extra funny for me.”

Which artists will be next to sell their song catalogues?

He said with selling stock footage, he never knows where his shots will end up.

“Whenever you sell something online it’s definitely validating as a creator,” Knappe said.

“Like, ‘Ok, I’m good at this. My work has value.’… But to have it featured in a music video (by) Ed Sheeran, it’s incredible; it’s a really strange feeling.”

The University of New Brunswick took notice of the music video too, and welcomed Sheeran and Swift over Twitter.

Their tweet read: “@edsheeran, we’d be happy to welcome you and @taylorswift13 for a campus tour anytime!”

To commemorate their 10-year friendship, Sheeran and Swift revisited their past for the new release.

In a tweet, Sheeran said the actors in the music video were the same ones from their 2012 hit Everything Has Changed.

Sheeran said the actors are “all grown up and off to college now!”

— With files from Travis Fortnum.

Not only is she the best singer/songwriter in the world but she’s also a very close friend, I’m very lucky to have her in my life. For the music video we got the kids from our song Everything Has Changed, all grown up and off to college now! https://t.co/Qv1NQwn1PY@taylorswift13