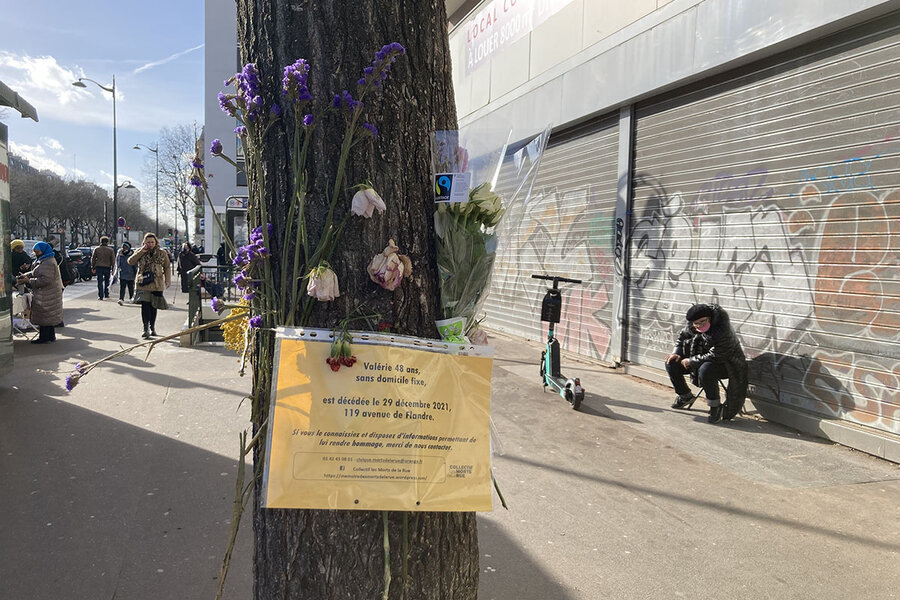 The death of elderly Swiss photographer René Robert, ignored by passersby for nine hours after he collapsed on a cold Parisian street, has been a wake-up call to French authorities to the plight of the country’s homeless people, for whom such a fate is more likely.

But it has also been a reminder to the greater public that more needs to be done to bridge the gap of understanding between homeless people and the rest of society.

If a well-known photographer can die ignored on the streets of Paris, what does that say about how French society treats its homeless population, for whom such a fate is more common?

Nonprofits are trying to tackle the problem. One, Entourage, has created an app that allows its 90,000 members – both homeless and not – to connect with one another in their community, when shyness or discomfort may make impromptu conversations a challenge.

“Those experiencing homelessness are just like the rest of us in that they don’t necessarily want to tell all their problems to the first person who stops by,” says Eric Constantin of the Abbé Pierre Foundation. “We need to keep the connection alive between people.”

“Most people stop to talk or ask if we need anything. But with the presidential elections and the Paris Olympic Games coming up, we’re not the image the city wants to have,” says Bruno, who is homeless. “But we’re human beings too, aren’t we?”

When elderly Swiss photographer René Robert collapsed on the sidewalk near the central Republique square in Paris last month, lying helpless for nine hours in the winter cold before a man living on the street alerted authorities to his plight – too late to save him – French society was shocked.

But while the public has struggled to understand why no one stopped to help for hours, Mr. Robert’s death is not necessarily unusual for France’s homeless population. In France, over 500 people die every year while homeless, and at an average age of 48, compared to 79 in the general population.

One of those was Valérie. She passed away at the end of December on a busy thoroughfare in the east of the French capital. Those who knew her say she was polite, always took care of her appearance and helped those around her, but struggled to find stable housing or work. She had three sons, one of whom lived in the United States, according to locals.

If a well-known photographer can die ignored on the streets of Paris, what does that say about how French society treats its homeless population, for whom such a fate is more common?

“She was really nice, I would give her hats, gloves, and other things to stay warm, but she always said, ‘No, I have enough,’” says Maria, who runs a clothing stand next to where Valérie set up a tent for over a year with her partner, under the awning of a building. (Maria declined to give her last name.)

Now, a bright yellow sign lined with delicate flowers is attached to a tree on the sidewalk where Valérie used to sleep, explaining that she lived and died here, and urging passersby to stop and remember her. The makeshift shrine is the work of local collective Morts de la Rue (Dead on the Street), which has striven since 2015 to identify and memorialize those experiencing homelessness who have died.

The challenge of providing housing and services to those experiencing homelessness is one that runs deep in big cities like Paris. But a problem that runs even deeper is a tendency by broader society to ignore those living on the street.

Though he was not homeless, Mr. Robert’s death on Jan. 19 has been a wake-up call to authorities to aid those without a place to sleep, which includes 300,000 people across the country and around 2,600 in Paris. But it has also been a reminder to French society that more needs to be done to humanize those experiencing homelessness, in order to bridge the gap of understanding between them and the rest of society.

“People living on the streets obviously have material needs like housing, food, and proper hygiene, but almost more important to them is to feel visible,” says Thibaut Besozzi, a sociologist at the University of Bourgogne, who spent eight months living part-time on the streets of Nancy as part of his post-doctoral research. “They just want recognition, that they’re not only human beings but individuals. A man living on the street once told me, ‘A hello is worth more than a euro.’”

In 2017, President Emmanuel Macron promised that no one would be subjected to living on the street by the following year. But not only was he forced to later apologize that he had failed to fulfill that promise, the measures by which French cities have dealt with homelessness have been questioned by advocacy groups.

In November 2020, police used tear gas to forcefully remove migrants camped out in central Paris, and authorities have systematically pushed improvised homeless shelters out to the edge of the capital, hidden from view. Several cities have launched anti-homeless measures, like shortening public benches so they can’t be slept on or installing spikes in doorways to prevent people from squatting.

Public sentiment has often followed suit. At the end of January, residents of the 20th arrondissement of Paris protested against an emergency housing shelter that is set to be built in the neighborhood next September, fearing disorder and insecurity.

Several French cities have engaged in anti-homeless measures, like this one in Paris on Feb. 7, 2022, where the city has blocked off a corner once occupied by a man and his makeshift tent home.

“The discourse at the moment is that housing is something you get because you ‘deserve’ it, and that if you don’t have it, it’s somehow your fault,” says Eric Constantin, the director of the Ile-de-France branch of the Abbé Pierre Foundation, a nonprofit that aims to provide access to decent housing. “But it’s so much more complex than people think. It’s always a succession of things – divorce, illness, job loss. We always think it’s something that can only happen to others, but homelessness can happen to anyone.”

The Ile-de-France region, which includes Paris, currently offers shelter to around 150,000 people, but barriers continue to make finding short and long-term housing a challenge. According to the Abbé Pierre Foundation, one out of every two requests for emergency housing via France’s national hotline receives no response.

And in order to apply for stable housing, one must go through a social worker and jump through numerous administrative hoops. For those without an internet connection or French language skills, those challenges are compounded.

“The current government is repeating old errors of increasing funding for emergency shelter, but people get exhausted by this [lack of stability,]” says Edouard Gardella, a sociologist at the CNRS who specializes in exclusion and homelessness. “Plus, there is a distinction in France between emergency shelter, which is an unconditional right for all, and housing, which necessitates meeting certain criteria. This ultimately makes the system unfair.”

“Majority of those without decent housing are invisible”

Overturning current sentiment surrounding homelessness in France has been a work in progress for local advocacy groups. While the rhetoric around homelessness has shifted in the last 100 years from one of criminality to victimhood, vagabondism was technically punishable under French law until 1992.

Nonprofits like Samusocial and Aurore have relied on steadfast measures like approaching people directly on the street in order to find individualized housing solutions, as well as ways of encouraging them back into mainstream society if they so desire. They offer addiction counseling, job training, or practical courses like gardening and French language learning.

More elusive is tackling the image problem people experiencing homelessness suffer from. At Entourage, the goal is to change the perception of those living on the street and remove the barriers that prevent people from approaching them. The nonprofit has created an app that allows the 90,000 members – both homeless and not – to connect with one another in their community, when shyness or discomfort may make impromptu conversations a challenge.

“Those experiencing homelessness are just like the rest of us in that they don’t necessarily want to tell all their problems to the first person who stops by,” says Mr. Constantin from the Abbé Pierre Foundation. “We need to keep the connection alive between people… [but] the majority of those without decent housing are invisible and go to great lengths to hide the fact that they have no place to live.”

When all else fails, nonprofit Morts de la Rue – which declined to be interviewed – continues their mission to humanize those who have lived a life of precariousness and preserve their memory. Down from the memorial for Valérie is another one of their yellow signs, this time for a middle-aged man named Bogumil who died in December.

Bruno and Michel, friends of Bogumil who have struggled to secure jobs or stable housing, spend their days in front of a supermarket. They say they’ve always had a system of “helping one another out” when the city fails to do so, and don’t think that what happened to Mr. Robert, the photographer, could happen to them. But they realize the fragility of their situation.

“Most people stop to talk or ask if we need anything. But with the presidential elections and the Paris Olympic Games coming up, we’re not the image the city wants to have, so they’re trying to get rid of us,” says Bruno, a coy smile beaming under a green Nordic hat and salt-and-pepper beard. “But we’re human beings too, aren’t we? Yes, I mean, I suppose we are.”