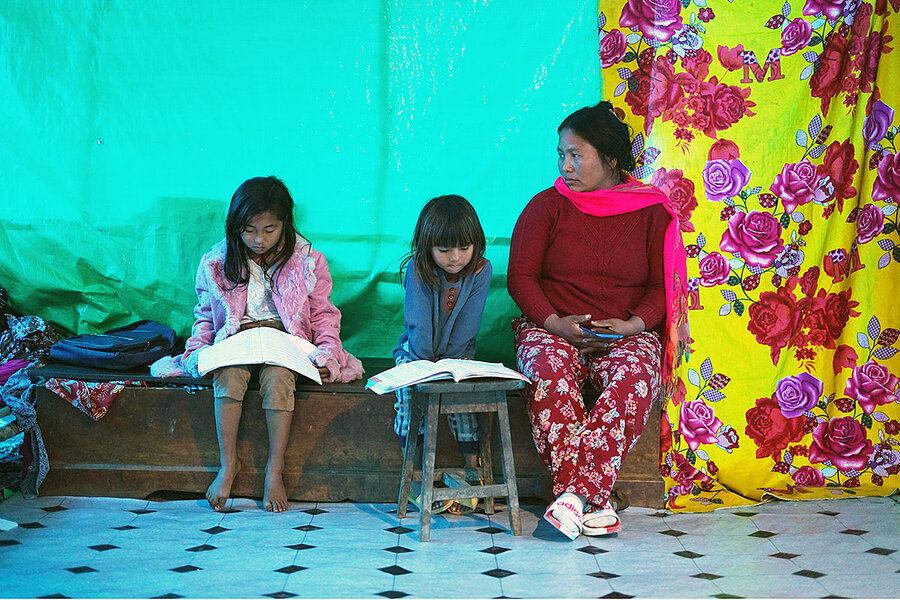 In the village of Farkawn, India, a one-floor school sits on a hill with a large playground. From the wooden benches of her tiny classroom, Vaniangcer can see the mountains that lead to Myanmar. Her home is only 26 miles away from the settlement, but feels unreachable.

Her mother, Lylypar, goes fishing and collects firewood to pay for her children’s monthly school fees. But the fact that Vaniangcer can attend school at all is because of local officials’ generosity and defiance.

One Indian state is defying the central government by permitting Myanmar refugees to attend school. A look at what it means to go against the grain and offer families refuge.

Since Myanmar’s military overthrew a democratically elected government last February, thousands of refugees have crossed the border into India, mostly through the northeast state of Mizoram.

Disobeying the Indian government’s orders to identify and deport illegal migrants, Mizoram authorities are instead opening up schools to refugee families from neighboring Chin state in Myanmar. At Vaniangcer’s school, refugees now account for roughly 20% of the student body. Many struggle with the local languages, says the principal, but they are earnest and hardworking students.

“Children can’t be seen as stateless anywhere in the world,” says Shantha Sinha, former chairperson of India’s National Commission for Protection of Child Rights. “At no time anywhere should children pay the price for the follies and politics of adults.”

Editor’s Note: The following story was reported by Monitor correspondent Fahad Shah before his arrest in Kashmir, India, for uploading “anti-national content” to The Kashmir Walla, a popular news site he edits. The Monitor is working for his release. You can find our full statement here.

Eight-year-old Vaniangcer once came crying to her mother after a few Indian soldiers passed her refugee settlement in India’s northeastern state of Mizoram. They reminded her of the Myanmar soldiers whose gunfire had echoed through the forest as she and her family fled Myanmar back in June.

“I was afraid when I saw them,” she says about the Indian service members, while playing a video game on her mother’s cellphone in a small hut made of bamboo and tarpaulin sheets donated by local aid agencies. “I felt they would shoot us.”

One Indian state is defying the central government by permitting Myanmar refugees to attend school. A look at what it means to go against the grain and offer families refuge.

Vaniangcer is one of thousands of refugees who have crossed the border into India since Myanmar’s military overthrew a democratically elected government last February. An estimated 15,000 – including more than 2,000 children – have stayed in Mizoram, though exact figures are difficult to establish. India has not signed the United Nations Refugee Convention of 1951 or the 1967 protocol, and therefore has no legal obligation to recognize or shelter refugees. Some Indian citizens, however, see a moral obligation.

Disobeying the central government’s orders to take “prompt steps in identifying the illegal migrants and initiate the deportation process expeditiously,” Mizoram authorities are instead opening up schools to refugee families from neighboring Chin state in Myanmar, who have ethnic ties with the Mizo people.

“Children can’t be seen as stateless anywhere in the world,” says Shantha Sinha, former chairperson of India’s National Commission for Protection of Child Rights. “It is not their responsibility that they are in the kind of predicament that they have been placed in. At no time anywhere should children pay the price for the follies and politics of adults.”

Many families felt that escaping to Mizoram was their only option as Myanmar’s military encroached on the northwestern Chin state, sparking repeated gunfights between military forces and local militia groups. One year after the coup, the Thailand-based human rights group Assistance Association for Political Prisoners reports that at least 1,546 civilians have been killed by the military junta and another 12,074 have been arrested.

Thawnghnin, a laborer who like many citizens in Myanmar goes by only one name, tried to resist military rule by joining the Chinland Defence Force. When the military arrived in his village, his wife and three sons hid in a nearby house while he and CDF comrades fought through the night. When morning came, he decided that was enough.

“I fought for our country to protect my people,” he says. “Then I decided to leave for India with my family.” Three weeks later, he had sold his house and begun the journey toward the Indian border. Thawnghnin’s family arrived at Farkawn in April.

“Till the conditions in our country get better, we have to stay here,” he says. “We don’t see a future, but we want to go back.” Amid all the chaos, the couple are relieved that their children have returned to school.

In September, the Mizoram government ordered schools to open admission to Chin refugees. The official letter said that “children aged between 6 to 14 years belonging to disadvantaged communities have the right to be admitted to school in a class appropriate to his or her age.”

H. Vanlalhriata, the principal of the BCA school in Farkawn, says about 50 refugees have joined their classrooms over the past few months, and now account for roughly 20% of the student body.

“Some of the [adult] refugees came to me,” says Mr. Vanlalhriata, who has run the school since 2015. “They wanted children to continue studies. … I told them we will try to accommodate your children and prepare them for this new education system.”

Fifteen-year-old Rebecca hangs clothing in the hilly village of Farkawn, India, Dec. 28, 2021. Because she can’t understand the local languages, the teenager no longer attends school.

The one-floor school sits on a hill with a large playground. From the wooden benches of her tiny classroom, Vaniangcer can see the mountains that lead to Myanmar. Her home is only 26 miles away from the settlement, but feels unreachable.

As refugees, her parents have difficulty finding work. Her mother, Lylypar, used to run a poultry farm and raise cattle to support her family of five, including her husband, who is blind. Now she goes fishing in the nearby river and collects firewood to pay for her children’s monthly school fees, but her income is unstable.

Sending her children back to school has helped ease her feelings of helplessness. She says the schools in her home village were shut down after the coup. “It makes me sad that we don’t have anything to go back to” now, she says, but when the war in her country ends, “we will go back.”

Wearing a pink fluffy jacket and sitting next to a mud oven, her daughter agrees. “I miss studying in my own village. I love to read and write, but I miss walking to school with my friends,” Vaniangcer says.

Refugee children face enormous stress during important developmental years, when a sense of stability and belonging is crucial to their long-term well-being. According to a U.N. report, only 50% of refugee children around the world attend primary school, compared with an average enrollment rate of 91%. And once students fall behind, they can find it difficult to resume their studies, especially in an unfamiliar country.

Ms. Sinha, the children’s rights advocate, says there needs to be an effort to support refugee children in every aspect of their lives.

Such children need “all forms of psychosocial and emotional support, confidence that they are being cared about,” she says. “No matter what other issues, children come first.”

Mizo and Chin communities share a history and culture. Both come from the Zo ethnic group, which followed animist traditions before British colonizers converted most of the Zo to Christianity. This remains the dominant religion in Chin and Mizoram today, in contrast with Hindu-majority India and Buddhist-majority Myanmar.

For years, the porous border between the two states allowed Chin and Mizo people to move between the countries with relative freedom, and some refugees have Indian family.

The common heritage may have driven the decision to shelter the Chin, but with more than 50 distinct dialects and languages spoken among Zo descendants, many refugees still face barriers to education because they can’t understand Mizo or Hindi.

This includes 15-year-old Rebecca, who speaks Hakha Chin, a language common in the central part of Chin state. In June, when the water was low, her family crossed the Tiau River that forms part of the border between India and Myanmar. They’ve gone from a modest home in the now-deserted town of Thantlang to a cramped rental in Farkawn.

“I want my children to become doctors or engineers, but they can’t even go to school now,” says her father, Lalliankhum. Back in Myanmar he had 8 acres of farmland, and made about $60 a month growing bananas, oranges, jackfruit, and lemons. Now he spends his days cutting firewood with Rebecca.

“I miss my school and my friends,” she says, while playing volleyball with her sister. “Without going to school I have no future. When we left home, I didn’t bring my books.”

Mr. Vanlalhriata, the principal, says some children are struggling to understand the curriculum, but there’s still a place for them in the classroom.

“The refugee students are good in math and science subjects. They are very sincere in their classes,” he says. “They don’t know our local language, but we help them and they also try hard at home to prepare.”

Some see this acceptance of Chin students as a lesson not just for India, but for other countries as well. Ms. Sinha says, “If we learn to take care of our children, there could be peace on earth.”