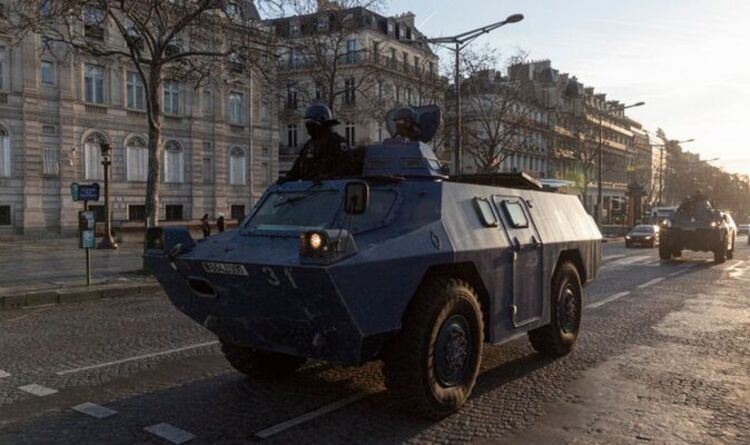 Around 3,000 lorries and other vehicles including tractors have descended on Paris as part of what have been dubbed “freedom convoys”. The protesters have drawn inspiration from Canadian truckers and plan to enforce a blockade of France’s capital city. The demonstrators oppose France’s Covid pass, which requires people to show proof of their vaccination status to gain entry to public venues like restaurants and cafes.

In addition, participants are also protesting against the rise in energy prices that has afflicted the country and Europe as a whole.

The police also confirmed that they had intercepted hundreds of vehicles heading into the city and issued almost 300 fines.

Paris has been inundated with extra police officers, as authorities attempt to contain the protests.

Some 7,000 have been deployed to the city and armoured police vehicles have also been filmed driving around the capital’s streets.

On its Twitter page, the European Freedom Convoy movement posted a video of the police vehicles.

They wrote: “Armoured vehicles continue to be deployed at all the gates of the French capital.

Jacques Figura said that the heavy-handed police presence was another example of President Macron standing “against the people”.

However, the French Prime Minister took a far more combative line in a media interview.

Jean Castex vowed that the authorities would take a “very firm” line with any demonstrators attempting to block the capital.

“The right to demonstrate and to have an opinion are a constitutionally guaranteed right in our republic and in our democracy,” he told France 2.

“The right to block others or prevent coming and going is not.”

France’s protesters were inspired by the blockade in Canada, which has closed a crossing that sees $1.7billion (£1.2billion) of daily trade between Canada and the US.