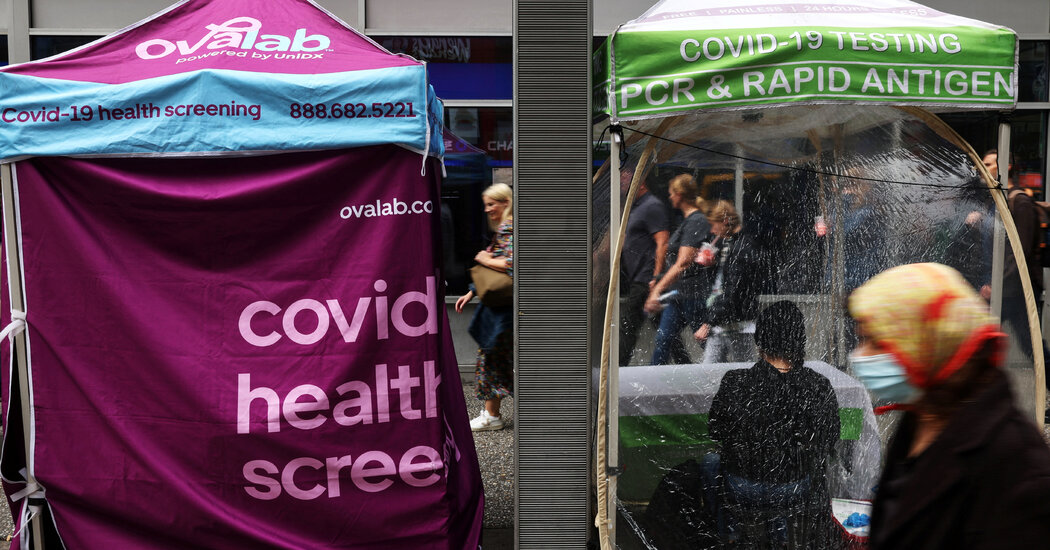 Three years into the pandemic, the coronavirus continues to impress virologists with its swift evolution.

A young version, known as XBB.1.5, has quickly been spreading in the United States over the past few weeks. As of Friday, the Centers for Disease Control estimated that it made up 72 percent of new cases in the Northeast and 27.6 percent of cases across the country.

The new subvariant, first sampled in the fall in New York State, has a potent array of mutations that appear to help it evade immune defenses and improve its ability to invade cells.

“It is the most transmissible variant that has been detected yet,” Maria Van Kerkhove, the Covid-19 technical lead at the World Health Organization, said at a news conference on Wednesday.

XBB.1.5 remains rare in much of the world. But Tom Wenseleers, an evolutionary biologist at KU Leuven in Belgium, expects it to spread quickly and globally. “We’ll have another infection wave, most likely,” he said.

Advisers at W.H.O. are assessing the risk that XBB.1.5 poses. Jacob Lemieux, an infectious disease doctor at Massachusetts General Hospital, said that the surge in cases would not match the first Omicron spike that Americans experienced a year ago. “Is it a Category Five hurricane?” he said. “No.”

Still, he warned that XBB.1.5 could worsen what is already shaping up to be a rough Covid winter, as people gather indoors and don’t receive boosters that can ward off severe disease.

Dr. Ashish K. Jha, the White House Covid-19 response coordinator, said that the Biden administration was monitoring the emergence of XBB.1.5 and urging people to take advantage of existing countermeasures. Preliminary studies suggest that bivalent vaccines should provide decent protection against XBB and its descendants. Paxlovid will also remain effective at fighting infections.

“We feel pretty comfortable that our countermeasures are going to continue to work,” Dr. Jha said. “But we’ve got to make sure people are using them.”

One thing Dr. Lemieux and other experts are confident about is that XBB.1.5 is not the last chapter in the coronavirus’s evolution. In fact, they expect that a descendant of XBB.1.5 may soon gain mutations that make it even better at spreading.

More on the Coronavirus Pandemic

That descendant may already exist, infecting people without raising notice yet. But sequencing efforts have declined so much worldwide that the discovery of the next generation of XBB.1.5 may be delayed. “As sequencing becomes less and less available at a global level, it’s difficult for us to track each of the subvariants of Omicron,” Dr. Van Kerkhove said.

Scientists have reconstructed the evolution of XBB.1.5 (which some have nicknamed Kraken) by poring over new sequences of coronaviruses in online databases. The first major step came last year when two earlier forms of Omicron infected the same person. As the viruses replicated, their genetic material was shuffled together. A new hybrid form emerged, with genetic material from both viral parents. Virus-watchers named it XBB.

This mixing, called recombination, happens fairly often among coronaviruses. Over the course of the pandemic, scientists have found a number of recombinant forms of SARS-CoV-2, the cause of Covid-19.

Most recombinant SARS-CoV-2 viruses have dwindled away in a matter of weeks or months, unable to outcompete other lineages. XBB, on the other hand, got a winning ticket in the genetic lottery. From one parent, it gained a set of mutations that helped it evade antibodies from previous infections and vaccinations. From the other parent, it gained a separate set of mutations that made it even more evasive.

“XBB literally picked up the most possible mutations that it could possibly pick up from those two parents,” said Thomas Peacock, a virologist at Imperial College London. The new combination made XBB one of the most evasive Omicron subvariants in existence last summer.

Recent experiments suggest that XBB paid a steep price for its power to evade immunity. The mutations allow it to escape antibodies by altering the shape of the protein, called spike, that covers its surface. But some of those mutations also make it harder for XBB spike proteins to grab tightly to cells — the first step required for an infection.

That loose grip may have lessened XBB’s advantage against other forms of the virus. In late 2022, it jostled alongside a number of other Omicron subvariants. In Singapore, XBB caused a surge in October, for example, while remaining rare in many other parts of the world.

As XBB multiplied, it continued to mutate into new forms. The earliest samples of XBB.1.5 were isolated in October in New York. The new subvariant gained one crucial mutation, known as F486P.

Yunlong Cao of Peking University and his colleagues tested out XBB.1.5 in dishes of cells, comparing how it fared against earlier forms of XBB. The researchers found that the F486P mutation allowed XBB.1.5 to grab tightly to cells again. But the new subvariant could still evade antibodies as well as earlier forms of XBB.

Dr. Cao and his colleagues posted their results online on Thursday. The data has not yet been published in a scientific journal.

XBB.1.5 most likely evolved somewhere in the northeastern United States, where early samples were first identified and where it remains most common. Once scientists could recognize it, they could track its growth.

In Connecticut, for example, Nathan Grubaugh at Yale University and his colleagues found that by mid-December, other Omicron subvariants were falling. Only XBB.1.5 cases were growing. Dr. Grubaugh estimates that it is about 20 percent more transmissible than BQ.1, which had been the dominant form.

“It doesn’t have those signs of a really big wave like we saw before,” he said. “It’s not going to come close to what it was last year.”

How severe XBB.1.5 infections are compared with other forms of the coronavirus is not yet clear. “It’s serious,” Dr. Grubaugh said. “I just don’t necessarily know if it’s really more serious than some of the other Omicron lineages in terms of the overall impact.”

XBB.1.5 has already spread to other countries, and is growing rapidly in Germany, Denmark and elsewhere in Europe. But its impact is likely to differ from place to place. In India, for instance, it will encounter many people who were infected with its parental strains last year, so it may face stronger immunity, Dr. Peacock said.

In China, which experienced a large surge of cases in late 2022, its prospects are even harder to predict. For most of the pandemic, China almost never shared virus sequences with international databases. Cooperation has increased in the past few weeks, but the databases may still not reflect the state of play in the country.

Much of XBB.1.5’s advantage in the United States comes from its ability to evade existing immunity, including that which is against other Omicron subvariants. In China, where there is less immunity, it may not have that edge. Dr. Peacock speculated that after other variants spread through China, it may then be XBB.1.5’s turn to rise.

Dr. Wenseleers said that the spread of XBB.1.5 outside China made him skeptical that restrictions on Chinese travelers would keep cases down. “It’s kind of pointless,” he said. “It would be better to make sure the elderly are well-vaccinated.”

As XBB.1.5 spreads, it continues to mutate, and experts believe that it can become even better at evading antibodies.

Scientists are already scanning new sequences being uploaded to an international database called GISAID in the hopes of spotting an upgraded version of XBB.1.5. But their job is getting harder because governments are pulling back on sequencing efforts. “Worldwide, sequencing has taken a real hit,” Dr. Peacock said.

The United States, which once lagged behind other nations, has managed to maintain a fairly strong sequencing effort. Without it, Dr. Peacock said, XBB.1.5 might have stayed below the radar for much longer. If XBB.1.5’s next generation is evolving somewhere with little sequencing, it may go undetected for some time to come.

Dr. Lemieux said that paring back on sequencing was a mistake, given how many infections and deaths the virus is still causing. “This is a part of public health,” he said.

And Dr. Peacock said that XBB.1.5 demonstrated that the evolution of the coronavirus would not slow down anytime soon. “Give it another two years, and maybe we can reassess where we think this is,” he said.