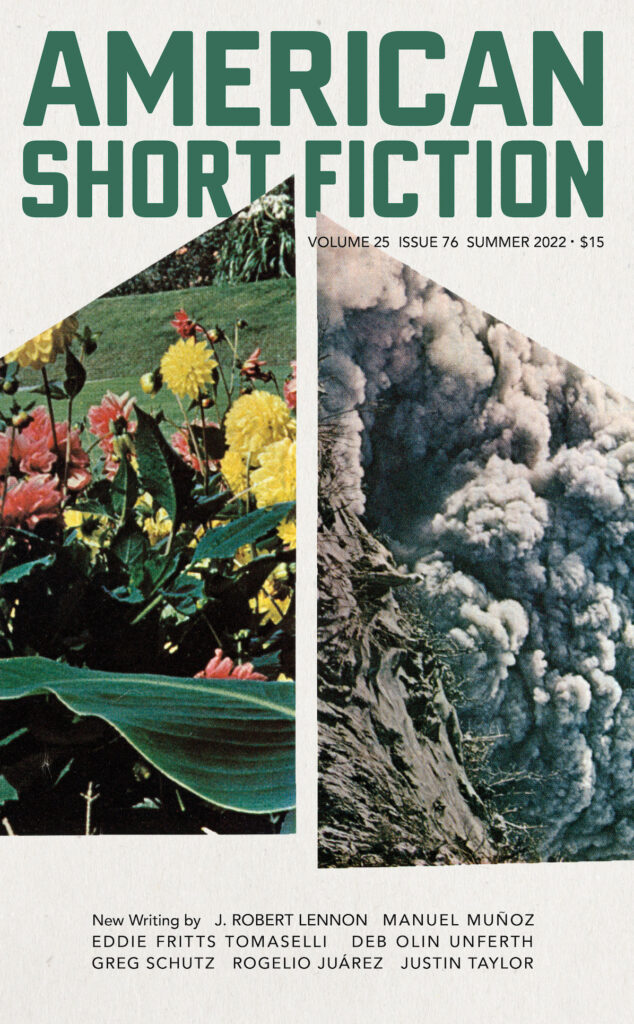 It’s a gray gumdrop made out of dreadlocks, about the size of an upturned bucket. As Hugo watches, it shakes itself, and the dreads shimmy and wave. Beneath them, two red clawed feet are visible gripping the perch, each with four—no, five—stubby fingers—no, toes. Hugo can make out two gleaming points behind the dreads, where eyes ought to be, but that’s about it. The creature is emitting a low, clucking chatter that reminds him of an actor practicing his lines backstage before the show.

This thing is not remotely a penguin. He’s not even sure it’s a bird. He thinks it is, but it also has the bearing of a small monkey wearing a costume of its own design.

“Pingüino,” Hugo says, and the thing clacks and clatters.

Manuel Muñoz, “What Kind of Fool Am I”

I drove out on the highway with a strange alertness, a sense of destination and release. I had never left town alone and even the fields felt new to me, not dusty or muddy, but dotted through with the green of the coming crop. They held a promise that I thought Teo was foolish to refuse. He wanted more though, and when I drove into the heart of Corpus, it wasn’t the Gulf air or the bustle that caught my attention. I could see now that it was a grimy city, salt-coated and open too wide to the white heat of the coming summer. I drove past the pool halls and the cocktail lounges promising Girls! just inside their dark hallways. Outside of one of the bars, a man lay drunk in the sun, his chin slack and his feet bare, but the streets were too empty. No one noticed him, just as no one would notice a sixteen-year-old boy wandering one day and then not there the next.

I’d been single for too long. Conventional dating means weren’t quite working and I was getting desperate. So I started looking into woo-woo stuff—and even had lousy luck with that. The Wyoming swamp priestess foresaw I was due for something ugly, the mechanical genie kept grinding asleep mid-prediction, and the glass-eyed binch kept binching about my sass and wouldn’t fess to a thing. But the Love Prophets sub-forum had one more for me: a psychic matchmaker in weird Wags County, Idaho.

Deb Olin Unferth, “I Am Alive” (one of four shorts)

I started crying a little. I walked on, sniffling and swiping tears from my face with my hand, through the parade of cheering people. If anyone asked me why I was crying, I would say that my brother had died in a battle. But, of course no one asked. I practiced in my head anyway, My brother died at battle, though he had not: he had died of cancer. “Isn’t it beautiful?” I said to another security guard when I reached the end of the line of flags. “Oh,” she said with a dismissive wave, “they do this every year.”

Human sacrifice, cannibalism, mutilation, rape: “Sounds nasty,” her pattern to come brother said when she told him about the play. He’d called long-distance from Camp Lejeune—calling just for her, as he’d never done before. “Hey, how you holding up?” She might’ve asked the same thing. The fall of ’97, another buildup in the Gulf: she kept waiting to hear he’d been deployed.

This is our scene—ninety-six square feet of a room, one window a bit wider than my outstretched hand, my cellmate Matthew Parker babbling in his sleep about quarks and the Large Hadron Collider, then, switching subjects, how in the U.S. there’s three million of us imprisoned and twenty-three million out.

“A whole nation,” he reminds me when he wakes up, in Spanish.

I respond in English. “I know. So what?”

A common syndrome of whiteboys: Matthew Parker is obsessed with Latin America and Latinas. I don’t know how that happened, or in which order, chicken or the egg. He knows more about Benito Juárez and the Zapatistas than I do. He has a poster of Salma Hayek in Desperado where everything but her is on fire: the landscape, the air. He’s loud, older than me, possibly Jewish, a hard lump of a man.

Justin Taylor, “In the Panhandle”

He was all tough muscle, and I realized that if he’d had the use of his legs my standing up like I did at the bar might have been the worst mistake I made all week. But then if he’d had use of his legs, a lot of things might have been different for him, this night or his whole life. Or they could have been exactly the same, I guess, because after all I had use of both of my legs, and here we were, the last two people in this parking lot.