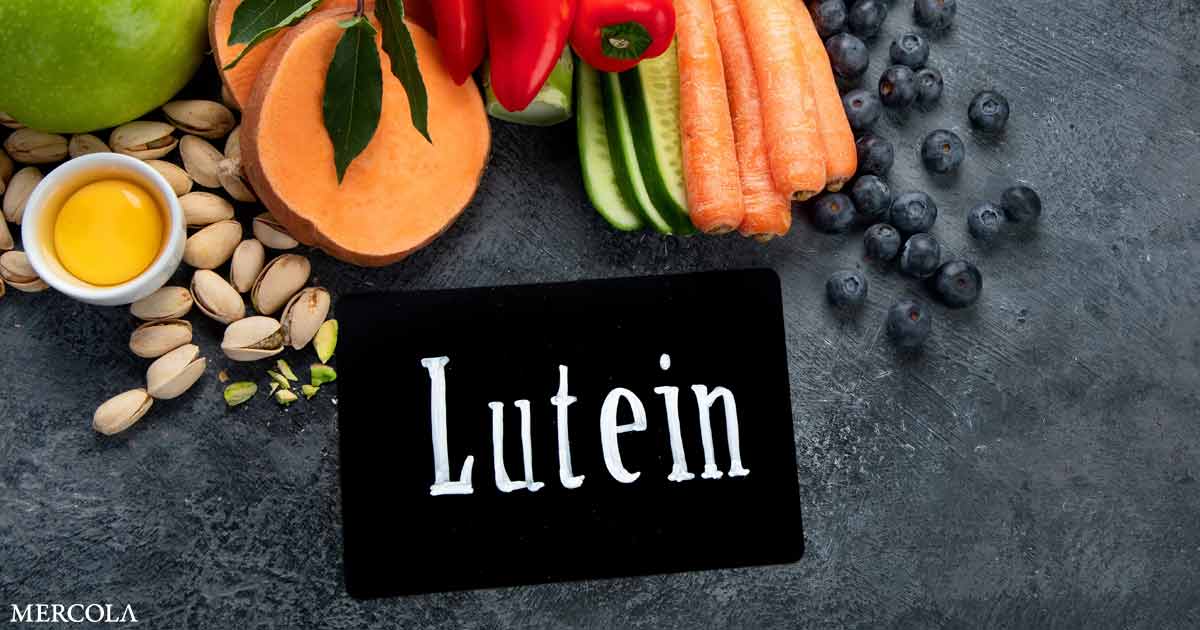 Lutein — a carotenoid found in egg yolks, avocados, cruciferous vegetables and dark, leafy greens — is well-known for its vision-enhancing properties.1 Research also suggests it has neuroprotective qualities,2 improving memory3 and boosting intelligence.4 As reported in the Senior Resource Guide:5

“Lutein belongs in the subclass of xanthophylls, which have polar molecular structures that possess unique membrane properties, such as fluidity, communication between brain cells, ion exchange, diffusion of oxygen, membrane stability, and the prevention of oxidation and inflammation.

Like other xanthophylls, lutein accumulates in neural tissue. In fact, lutein accounts for most of the carotenoid accumulation in the human brain, and this high concentration of lutein in the brain may indicate its neuroprotective value.

Lutein accumulates in the brain and embeds in cell membranes. There, lutein protects the neuronal structure and function of brain cells. While lutein is distributed in the gray matter of the brain, researchers have detected its presence in the temporal cortex, the prefrontal cortex, and the hippocampus. Lutein accumulates in the brain over a person’s lifespan and may therefore provide lifelong benefits to brain health.”

Your body cannot manufacture lutein, so you need to get it from your diet. Unfortunately, many do not get enough lutein simply because they don’t eat enough vegetables and/or eggs.

How Lutein Protects Your Vision

Epidemiological research has found an inverse association between lutein and zeaxanthin levels in the eyes and age-related macular degeneration (AMD), the primary cause of blindness in the elderly, and cataracts.8,9

As explained in the 2013 paper,10 “The Role of Lutein in Eye-Related Disease,” lutein and zeaxanthin (another carotenoid present in high concentration in the eyes) help prevent age-related eye degeneration by ameliorating the damage caused by blue light and oxygen free radicals. Blue light is responsible for a majority of the damage to the eye, and lutein selectively absorbs blue light.

According to this paper, “Dietary concentrations between 6 and 20 mg per day of lutein have been associated with a reduced risk of ocular disorders such as cataracts and age-related macular degeneration.”

A more recent scientific review,11 published in 2019 in PLOS ONE, found people who took 10 mg or 20 mg of lutein per day had greater macular pigment optical density (MPOD), and better visual acuity and contrast sensitivity than those who did not supplement.

Macular pigment, the yellow pigmented area found in the center of your retina, acts as “internal sunglasses,” protecting your macula from harmful blue light. The denser your macular pigment, the lower your risk of developing AMD. Greater MPOD is also associated with better visual performance overall.12

According to the authors of the 2019 PLOS ONE review, “The available evidence suggests that dietary lutein may be beneficial to AMD patients and the higher dose could make MPOD increase in a shorter time.” Lutein has also been shown to prevent cell death caused by retinal detachment, when administered in a timely manner,13 and can help improve night vision.14

More recent research has also found lutein plays an important role in brain health, and may even help prevent neurodegenerative diseases.15 As noted in the 2012 paper,16 “Neuroprotective Effects of Lutein in the Retina,” lutein benefits your brain and cognition by preventing:

Lutein and zeaxanthin have also been shown to help maintain the integrity of your brain’s white matter,17 and this too can lower your risk of age-related decline.

Lutein Benefits Both the Old and the Young

In one 2017 study,18,19,20 which involved 60 adults between the ages of 25 and 45, those with higher levels of lutein in middle-age had more youthful neural responses than those with lower levels.

Carotenoid status was assessed by measuring MPOD, which is also highly correlated with the lutein status in your brain. Most studies have focused on the effects of diet after cognitive decline has already set in.

Here, they wanted to evaluate whether lutein might have a preventive effect, as the process of cognitive decline has been shown to begin far earlier than typically expected. According to the researchers, you can start seeing cognitive deterioration as early as your 30s.

Indeed, the results suggest your diet, and in this case lutein-rich foods, does help keep your brain young. As noted by co-author Naiman Khan, professor of kinesiology and community health at the University of Illinois:21

“Now there’s an additional reason to eat nutrient-rich foods such as green leafy vegetables, eggs and avocados. We know these foods are related to other health benefits, but these data indicate that there may be cognitive benefits as well.”

Lutein has also been shown to benefit younger people. In one such study,22 healthy 18- to 30-year-olds exhibited better brain function after taking lutein and zeaxanthin supplements for a year. Significant improvements were seen spatial memory, reasoning ability and complex attention.

Several other studies support these findings. For example, in one University of Georgia study,23 older adults (mean age 72) taking 10 mg of lutein and 2 mg of zeaxanthin daily for one year were able to maintain their brain function, whereas the placebo group’s verbal learning ability and word recall deteriorated over the course of the study.

The mechanism thought to be responsible for this protective effect was enhanced blood flow through the brain. A number of other studies looking at lutein’s influence on cognition have shown that higher lutein and zeaxanthin levels in the macula are associated with improved:24,25,26

Other Health Benefits of Lutein

Lutein has also been found to promote health in other ways, beside optimizing vision and cognition. For example, studies have found:

Lutein is primarily found in green leafy vegetables, with kale and spinach topping the list of lutein-rich foods. You’ll also find it in orange- and yellow-colored fruits and vegetables. The word lutein actually comes from the Latin word “luteus,” which means “yellow.”

As a general rule, anywhere from 15% 47% of the total carotenoid content in dark green leafy vegetables is lutein.38 Following is a list of foods that are particularly rich in lutein.39,40,41 Most of these also contain zeaxanthin, albeit in lesser quantities than lutein.

Ideally, you’ll want to buy the whole food and consume these foods as close to raw as possible, as the lutein (and other carotenoids such as zeaxanthin) are easily damaged by heat. Accessory micronutrients in the foods that enhance their action also tend to get easily damaged.

While there’s no recommended daily intake for lutein or zeaxanthin, studies have found health benefits for lutein at a dose of 10 milligrams (mg) per day and at 2 mg/day for zeaxanthin.

How to Optimize Lutein Absorption

Lutein and other carotenoids are fat-soluble, so to optimize absorption, be sure to add a little bit of healthy fat to your meal. For example, research42,43 shows that adding a couple of eggs — which contain both lutein and healthy fats — to your salad can increase the carotenoid absorption from the whole meal as much as ninefold.

Ideally, opt for organically-raised, free-range pastured eggs. Not only do they tend to have a better nutritional profile, by opting for pastured eggs you’ll also avoid pesticide exposure and genetically modified organisms. I raise six chickens and typically eat five eggs a day — the yolks raw in my smoothie and the whites cooked with my meat.

The vast majority of commercially available eggs come from concentrated animal feeding operations (CAFOs), where the hens are not permitted to forage on pasture. Instead, they’re typically fed a diet of corn and soy, the vast majority of which are genetically engineered. CAFO eggs are also far more prone to cause foodborne illness caused by salmonella contamination.

If you live in an urban area, visiting a local health food store is typically the quickest route to finding high-quality local egg sources. Your local farmers market is another source for fresh free-range eggs. Cornucopia.org also offers a helpful organic egg scorecard44 that rates egg manufacturers based on 22 criteria that are important for organic consumers.

You can often tell the eggs are free-range by the color of the egg yolk. Foraged hens produce eggs with bright orange yolks, indicative of higher amounts of lutein and zeaxanthin. Another way to boost absorption of lutein from your vegetables is to add some raw organic butter or healthy oil such as olive or coconut oil to your salad.

To protect your vision over the long haul, aside from making sure you’re eating plenty of lutein-rich foods, you’ll also want to avoid a high-glycemic diet. As reported by Tufts University in 2017:45

“Sheldon Rowan, a scientist in the Laboratory for Nutrition and Vision Research at the Human Nutrition Research Center on Aging at Tufts, said there are plenty of indications that the types of carbohydrates we eat play a role in the development of AMD.

People who eat lots of simple carbohydrates, like those in white bread and sweetened beverages, are more likely to get the disease. This could be because simple carbs break down rapidly during digestion, creating a spike in blood sugar that can lead to widespread inflammation, a condition linked to AMD … If … blood glucose stays low over a long period of time, Rowan said, it can lower incidence of AMD.

To understand why, Rowan tested the two diets on laboratory mice. Over the course of a year, he fed one group of mice ‘high-glycemic’ foods — ones with lots of simple starches. A second group got a ‘low-glycemic’ diet, rich in complex carbs, but otherwise identical in calories and nutrients. In a third group, Rowan switched the mice’s diet from high- to low-glycemic foods halfway through the study.

Sure enough, mice with the low-glycemic diet did not develop AMD, while mice fed the high-glycemic diet almost all came down with the disease … In the mice that switched diets, though, Rowan saw something completely unexpected. Not only did they avoid AMD, but the existing damage to their retinas was reversed.

‘No one had ever seen that before,’ Rowan said of the findings, which were reported in Proceedings of the National Academy of Sciences.46 ‘The most common form of AMD doesn’t really have a treatment right now — but this suggests that just changing to a healthier eating pattern could have a huge impact.’”

Further exploration revealed that high-glycemic diets led to higher levels of advanced glycation end products (AGEs), which Rowan points out are “toxic end products of sugars” that “can damage the proteins and lipids that a cell needs to function.”

Following my nutrition plan will help normalize your insulin level by reducing, or eliminating, excess sugar and processed grains from your diet.