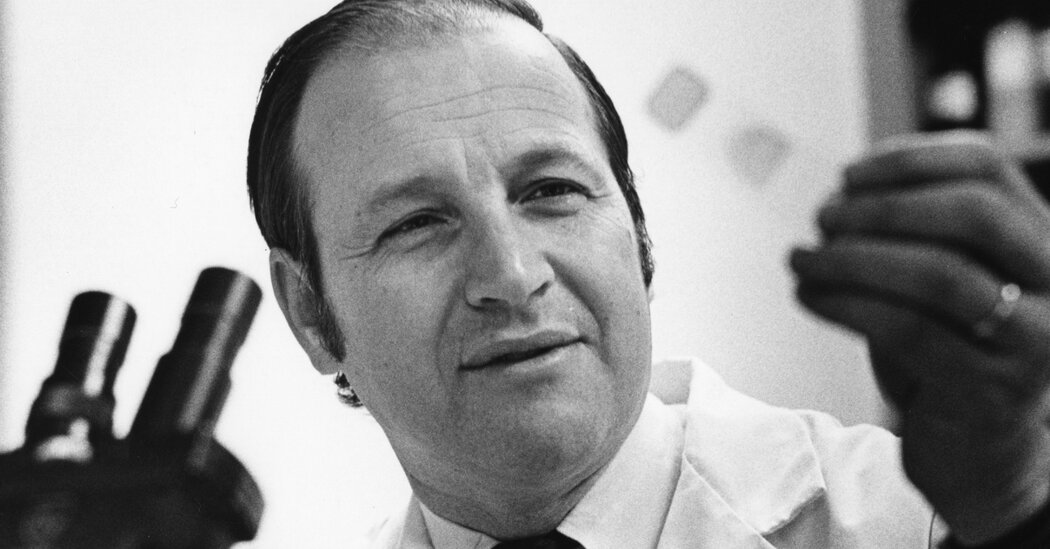 Dr. Samuel L. Katz, a virologist who was part of the research team at Harvard Medical School that developed the measles vaccine, an advance more than half a century ago that has saved countless lives, died on Monday at his home in Chapel Hill, N.C. He was 95.

His son David confirmed the death.

Dr. Katz later enhanced the reputation of the pediatrics department at the Duke University School of Medicine as its chairman.

Dr. Katz took up the fight against measles in 1956, when he joined a laboratory at Children’s Hospital Medical Center (now Boston Children’s Hospital) run by Dr. John Enders. Two years earlier, Dr. Enders had shared the Nobel Prize in Physiology or Medicine for discovering how to grow the polio virus in cultures, a breakthrough that was critical to Jonas Salk’s development of a polio vaccine, which led to widespread successful immunizations.

Dr. Enders’s lab had already isolated the measles virus from a 13-year-old boy when Dr. Katz arrived there as a research fellow. Measles was a major medical threat at the time: In the decade before the vaccine was made available in 1963, nearly every child in the United States had measles by age 15, with three to four million people infected by it every year, leading to an estimated 400 to 500 deaths annually, according to the Centers for Disease Control and Prevention.

“I was put to work with a visitor from Yugoslavia, Milan Milovanovic, who taught me a lot of practical, at-the-bench work,” Dr. Katz told Dartmouth Medicine, an alumni magazine, in 2009. “We worked together on adapting the virus to different cell systems and to eggs and eventually to chick embryo cells” — a process that led to the weakening of the virus so it could stimulate an immune response without causing serious side effects.

Dr. Katz was involved in inoculating rhesus monkeys with the virus.

The chick virus was injected into students at a state school for children with neurological and central nervous system problems, a group whose use by the lab reflected a time of looser ethical standards about test subjects.

“At the end of several weeks, they had antibodies to the measles virus,” Dr. Katz recalled.

He became a research associate in the lab in 1958 and kept that title for the next decade, during which he was also a pediatrician at Children’s Hospital and Beth Israel Hospital in Boston and an assistant professor of pediatrics at Harvard Medical School.

Dr. Katz played two other notable roles in the development of the measles vaccine. In one, he worked with pharmaceutical firms that wanted to manufacture a vaccine.

“He was forever sending vials of the viruses to Merck and other companies,” I. George Miller Jr., a professor of pediatrics at the Yale School of Medicine, who joined the lab in 1961, said in a phone interview. “He was kind of the Good Humor man for vaccines.”

In the other role, at the request of a British pediatrician, David Morley, Dr. Katz brought a prototype vaccine to Nigeria in 1961 to immunize children who were highly susceptible to measles because their systems had been weakened by malaria, intestinal worms, vitamin A deficiency and protein depletion.

Nigerian parents were accustomed to losing their children to measles; they had a mortality rate of 5 to 15 percent if they got the virus. While there, Dr. Katz recalled on the “Open Forum” podcast, he heard people say, “You don’t count your children until the measles has passed.”

He vaccinated children in a village there, and they developed immunity.

The measles vaccine was licensed in 1963 and soon became widely available; eight years later, it was incorporated into the combined measles, mumps and rubella vaccine.

Samuel Lawrence Katz was born on May 29, 1927, in Manchester, N.H. His father, Morris, was a railroad executive; his mother, Ethel (Lawrence) Katz, was a homemaker.

He entered Dartmouth College in 1944, hoping to become a journalist. His interest changed to medicine a year later, when he enlisted in the Navy and was sent to hospital training school in San Diego.

After interning at Beth Israel, he was a resident at Children’s Hospital, a teaching affiliate of Harvard Medical School. While there, he witnessed a polio outbreak in the summer of 1955, the year the Salk vaccine became available.

He worked in the hospital’s polio wards that summer, seeing the disease’s devastation firsthand. When the crisis eased, he asked for permission to work with Dr. Enders.

“All the time we were working in the lab — with viruses, with cell cultures, with blood specimens, with potential vaccines,” Dr. Katz said on the podcast, Dr. Enders “would give these materials to anyone that visited the lab who was a legitimate investigator.”

Dr. Katz left Harvard for the Duke University School of Medicine in 1968. As chairman of its pediatrics department for 22 years, he helped raise its national standing.

“He had such a command of virology and clinical practice and was engaging in a very positive way,” Dr. Mary Klotman, dean of the Duke medical school, said in a phone interview. “He was a role model for the integration of science, clinical care and mentoring the next generation of clinicians.”

Dr. Katz stepped down from running the Duke pediatrics department in 1990 to work with his second wife, Dr. Catherine Wilfert, an H.I.V./AIDS researcher and activist and professor of pediatrics at the Duke medical school. She was the principal investigator in a pediatric AIDS clinical trial, beginning in 1987, that showed the efficacy of using the drug AZT to reduce the incidence of mother-to-child transmission of H.I.V. by over 60 percent.

Dr. Wilfert left Duke in 1996 and became scientific director of the Elizabeth Glazer Pediatric AIDS Foundation. Dr. Katz continued to teach at Duke until retiring in 1997.

In addition to his son David, he is survived by two other sons, John and William; five daughters, Deborah Miora, Susan Calderon, Penelope Katz Fischer, Rachel Wilfert and Katie Regen; and 17 grandchildren. His marriage to Betsy Cohan ended in divorce. His marriage to Dr. Wilfert ended with her death in 2020. His son Samuel Jr. died in 1980.

Dr. Katz became a renowned advocate for vaccines. He was chairman of the C.D.C.’s advisory committee on immunization practices from 1985 to 1993 and the recipient of the 2003 Albert B. Sabin Gold Medal, which is given to public health leaders who save lives through vaccines. The medal is named for the doctor who developed the oral polio vaccine.

“He was someone you could count on for intellectual rigor, who never panicked and wanted to do what was best in the field,” Peter Hotez, dean of the National School of Tropical Medicine at the Baylor College of Medicine, said in an interview. He added, “I’m sure he would have conniptions over the anti-vaccine activism causing people to refuse the Covid vaccine.”