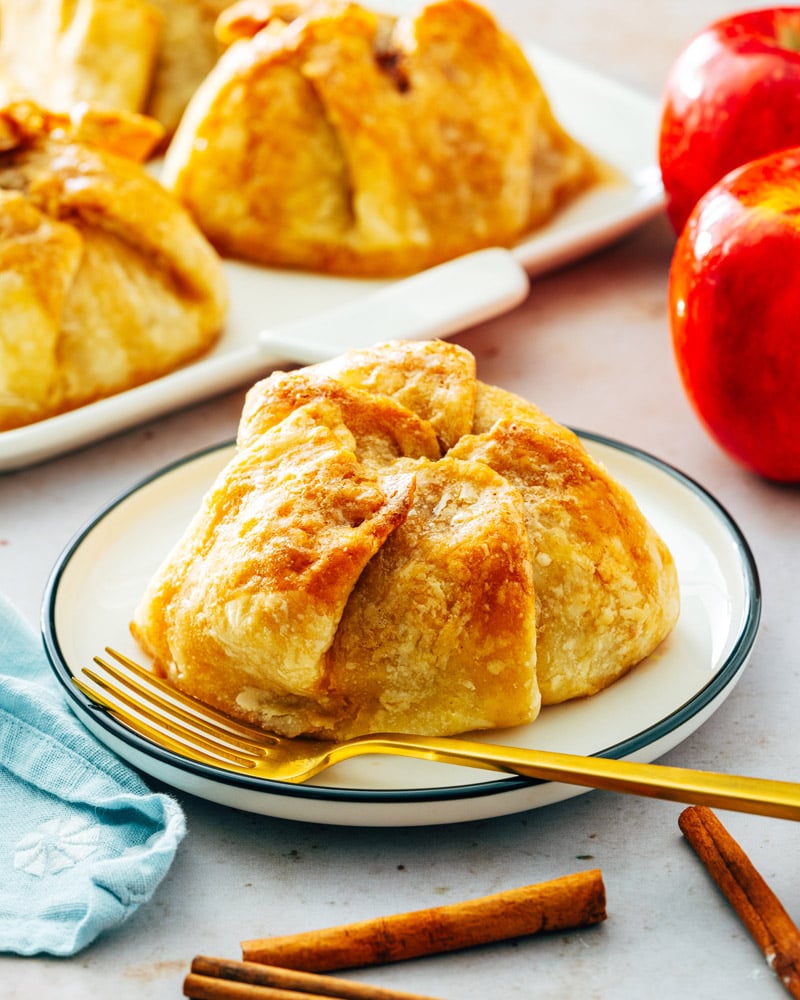 This apple dumplings recipe is truly the best! Tender, cinnamon-spiced apples are baked in a flaky pastry crust.

Want to make dumplings? Have we got the recipe for you. Introducing…Grandma’s Old Fashioned apple dumplings recipe! Yes, this really is Grandma’s recipe: we worked with Alex’s mom to adapt her famous fall favorite for your home kitchen. Tender, cozy-spiced apples are baked up in a flaky pasty crust with a spiced brown sugar syrup. The result is a revelation: there’s a reason Grandma is famous for these! Here’s what you need to know to make the very best apple dumplings.

About this apple dumplings recipe

Apple dumplings are a dessert of apples that are baked or boiled wrapped in pastry crust. They originated in England in the early 1700’s, then later spread to America where they become popular. Each cook has their own way of making an apple dumpling. A common method is to core apples, place sugar and cinnamon inside, wrap them in pastry crust, and bake in a spiced sugar syrup.

This apple dumplings recipe is truly Grandma’s famous recipe: Alex’s mom makes these dumplings every fall in huge batches and sells them to the surrounding farm community. People come from far and wide to get ahold of them! So we were excited to work with her to share the secret family recipe! Here we’ve adapted her original recipe for 26 dumplings to make a pan of 6.

How to make apple dumplings: an overview

Here’s the basic outline of what you’re getting yourself into with this apple dumplings recipe. The process takes about 2 ½ hours total. This recipe makes a pan of 6 dumplings; you can multiply it as desired. You can refrigerate or freeze leftovers. Here’s an outline of what you’ll have to do (jump to the recipe for full details):

Best apples to use

This apple dumplings recipe works with many different types of apples. Because it’s a rustic family recipe, Alex’s mom has made it with just about every variety from any tree in the surrounding area. This is a great recipe for apples from apple picking, and it works with most types of purchased apples. However, here are a few things to note:

How to cut apples for apple dumplings

The only part of this apple dumpling recipe that requires a little technique? Peeling, coring and slicing the apples. An apple peeler-corer-slicer is the quickest and easiest way to accomplish this. There are many manual versions of this tool, and also a type that connects to a stand mixer (which we used here).

You can also peel and cut the apples manually with a vegetable peeler and knife. The trick to cutting the apples is to cut around and pull out the core, then cutting the apples into 1/8th inch slices width wise. See the photos below! We tried it both ways and it worked with either. The machine makes it look very professional, but you won’t notice in the finished dumpling.

How to form apple dumplings

The other tricky part of apple dumplings: how to form them! Here are a few tips:

Multiply the recipe as desired

This apple dumplings recipe is adapted from Grandma’s original recipe that makes 26 dumplings: intended for giving away, selling, or freezing the leftovers. The recipe below makes 6 dumplings, but you can double, triple, or quadruple it as needed to make 12, 18, or 24 dumplings.

Got leftover apple dumplings or using them to give away? These dumplings are delicious cold, room temperature, or warm. (We actually loved eating leftover refrigerated dumplings cold!) Here’s what to know about dumpling storage:

This apple dumplings recipe is vegetarian. But it can easily be made vegan by using vegan butter! This type of butter works well as a substitute in vegan pastry crusts and desserts. For gluten-free, you can certainly try 1-for-1 gluten-free flour, but we haven’t tested this swap.

Last up: serving apple dumplings! This recipe is perfect for a fall dessert or winter dessert, great for Thanksgiving, Christmas or other family gatherings. These little balls of goodness are so tasty, you don’t need any toppings. However, serving with a bit of vanilla ice cream takes it to the next level. Or, you can add other toppings! Here are some ideas:

The fall and winter are perfect for tasty treats with apples! Here are a few more apple desserts you’ll love:

This apple dumplings recipe is…

Vegetarian. For vegan, use vegan butter.

This apple dumplings recipe is truly the best! Tender, cinnamon-spiced apples are baked in a flaky pastry crust.

*For vegan, substitute vegan butter, which works well as a substitute in pastry crusts and desserts.