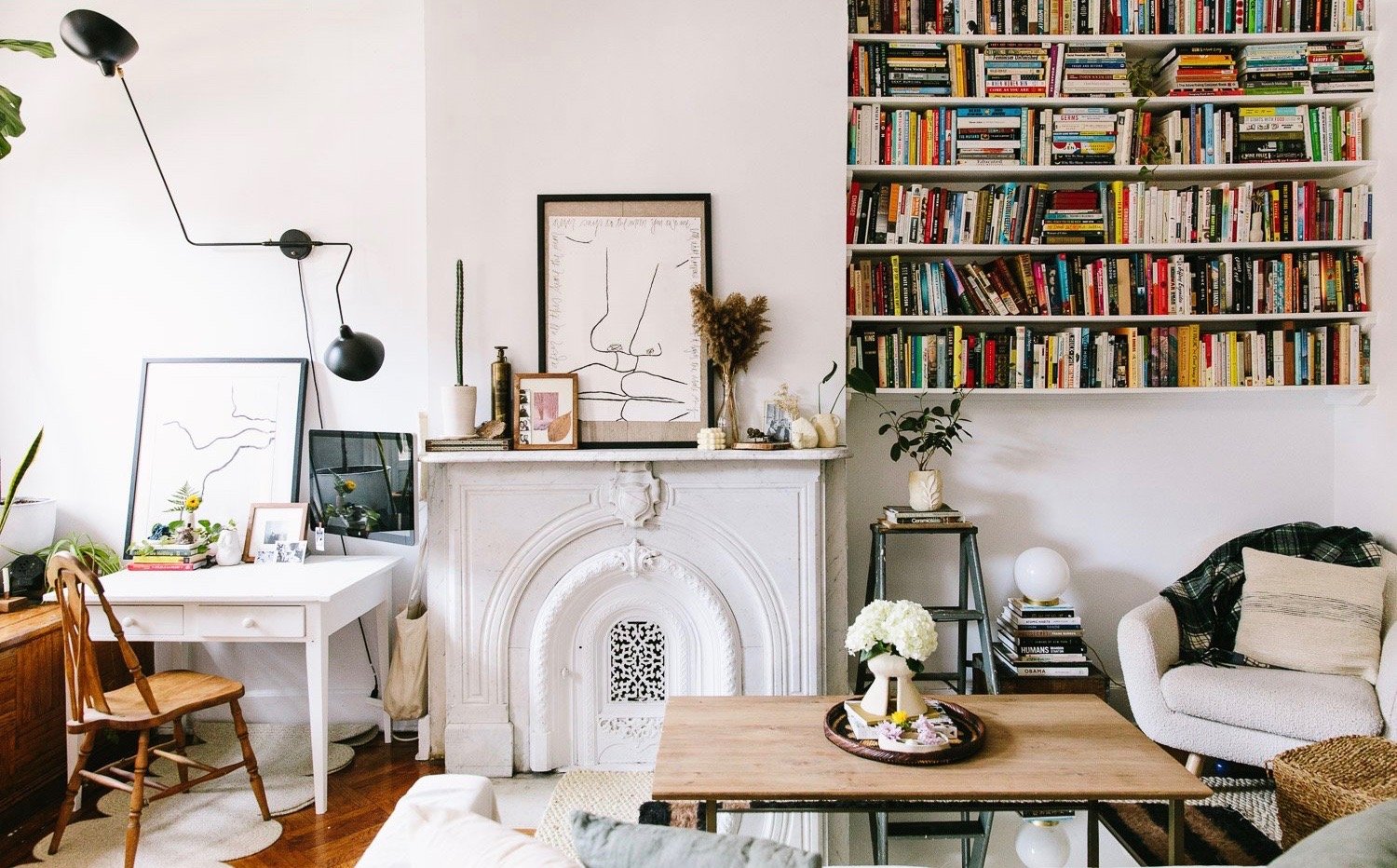 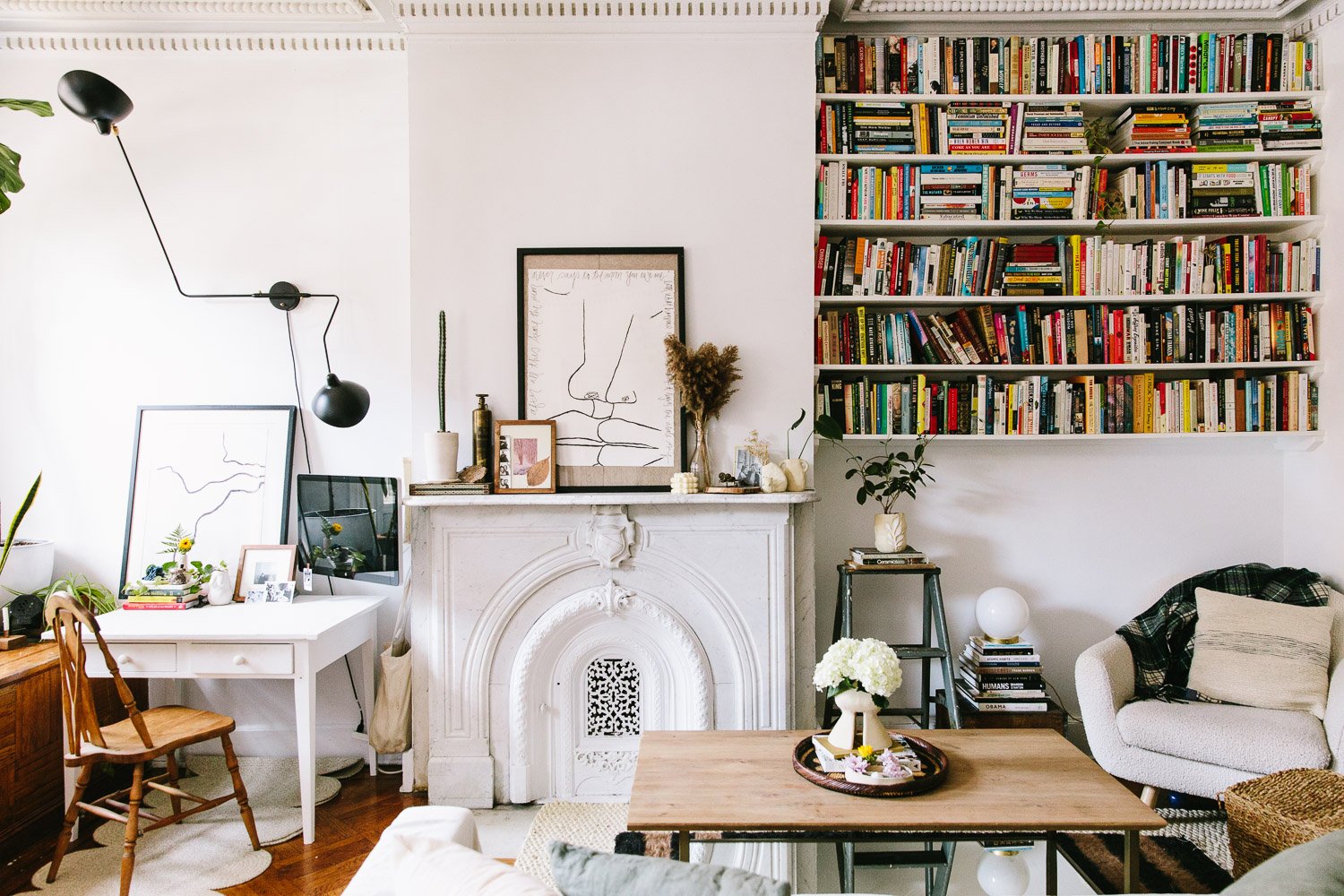 I first met Grace Cady when she regularly babysat the boys for a few years. She brings a beautiful mindfulness to all she does; my kids always say, “Grace is sooooo calm.” (Here’s a photo of her at Toby’s ninth birthday party.) Grace now lives with her husband Jack and their dog Cooper, and she gave us a look around their sunlit apartment… 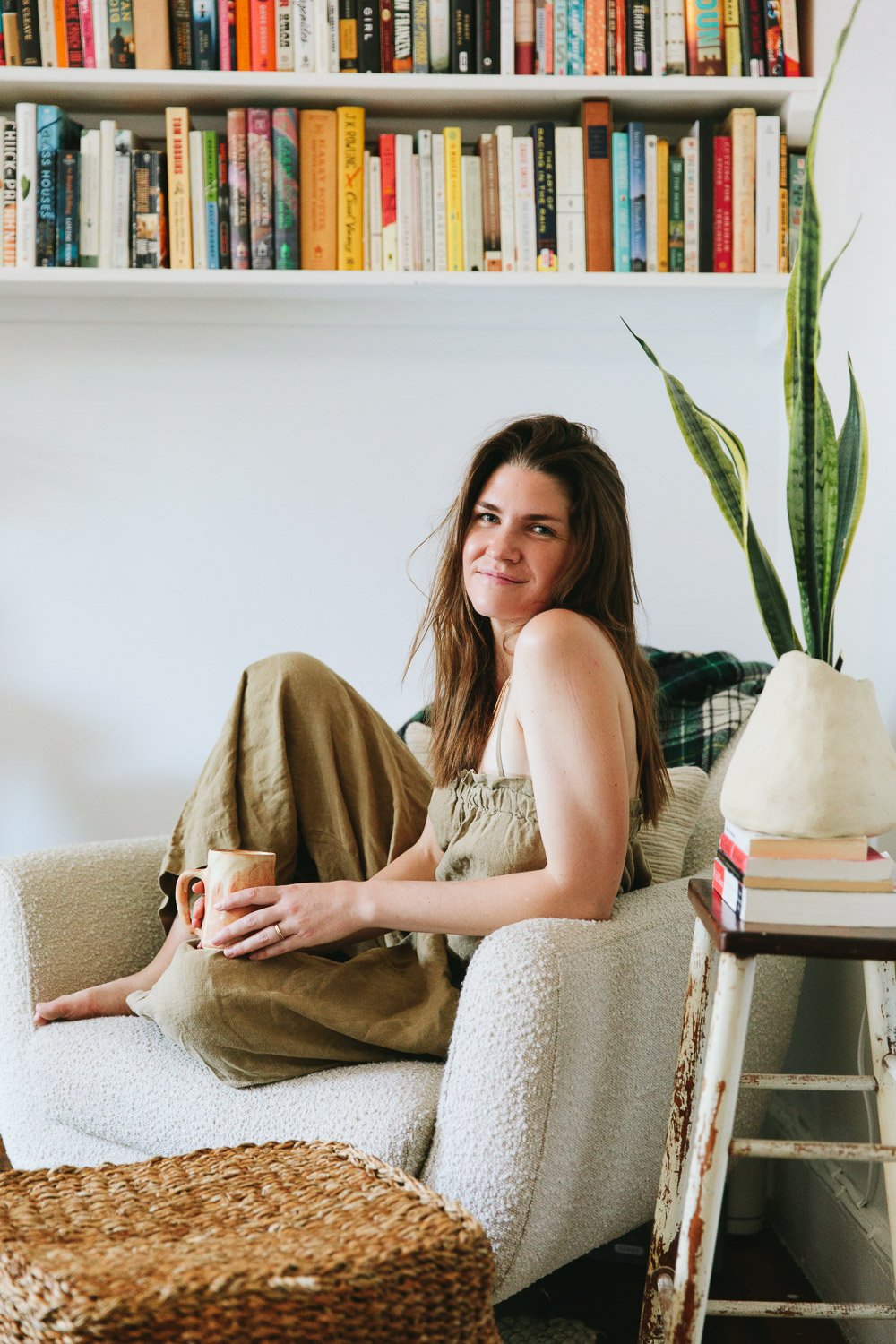 On first impressions: When we first saw this apartment, it wasn’t in great shape. There was a broken light in the kitchen. There was a diaper in the toilet! But I walked into the living room and felt like this space had to be in our life. My husband was like, no way, I hate that apartment. But in the end he trusted that I had a really good feeling.

On fresh paint: At first, all the walls were weird colors — like a puke-y yellow, and a not-cute blue, and a salmon pink. So, we painted everything white. We also changed the light fixtures and sink faucets and medicine cabinet — inexpensive things that made a huge difference. More recently, Jack installed the built-in bookshelves. We used to have Ikea standing shelves, but last winter he was bored and started researching and then just did it! It changed the entire space. [Ed. note: Grace and Jack then made our bookshelves, which we love.) 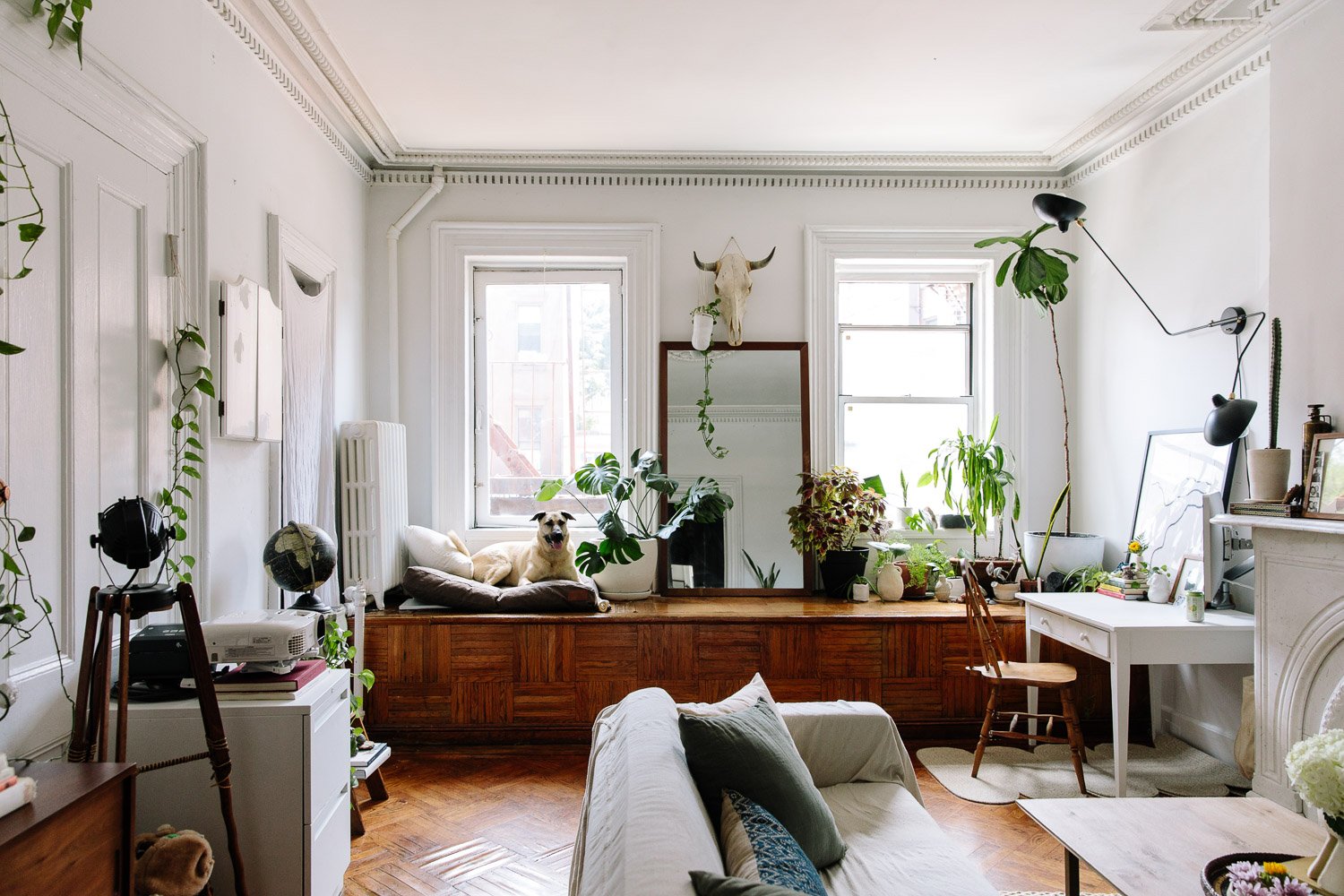 On the weird ledge: The ledge in our living room is the strangest thing — we don’t even know why it’s there! Our dog Cooper lies on it, and we display plants. Every Saturday night, we have friends over, and it turns into a stage to play a charades-game called Salad Bowl. (Everyone puts three words into a bowl, and each team goes back and forth, and it’s three different rounds; in the first round, you can say anything; the second round is charades and you act out the word; and the third round is just one word; by that time, everyone has inside jokes about the words!) 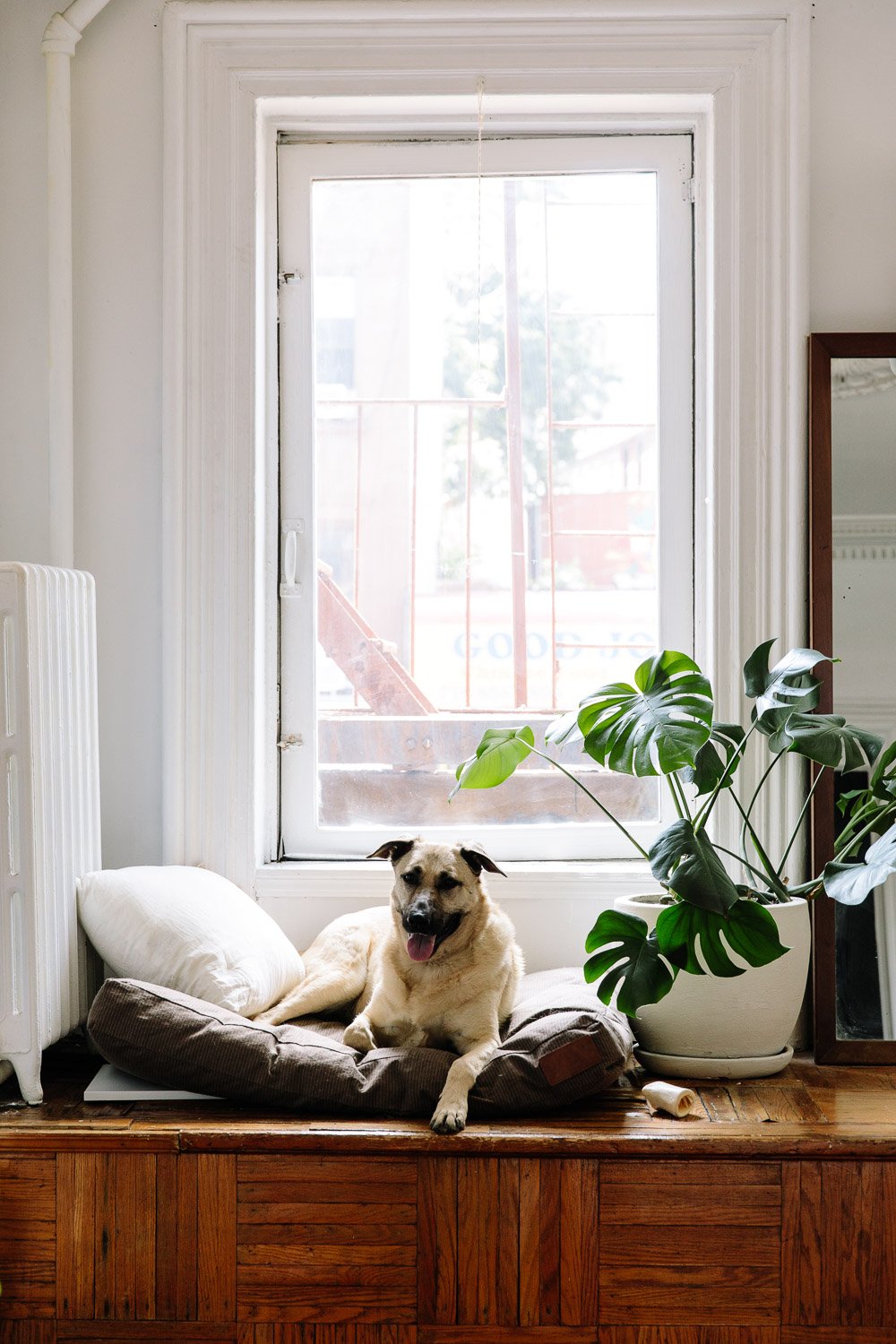 On a beloved pet: We adopted Cooper four years ago from a dog rescue called Hearts and Bones. At first we were interested in another dog, but then we met Cooper, and he was so sweet and cuddly, and we took him for a walk, and we were like, this is it, this is him.

On happy wiggles: We call him ‘the camp counselor.’ He’s always trying to get everyone to play and have fun. We think he knows he was at a kill shelter because he has a second lease on life — he’s bursting with joy the whole time. And he LOVES having his teeth brushed. Jack and I will be brushing our teeth at the same time and Cooper will come in and drool at the door until we brush his teeth, too. 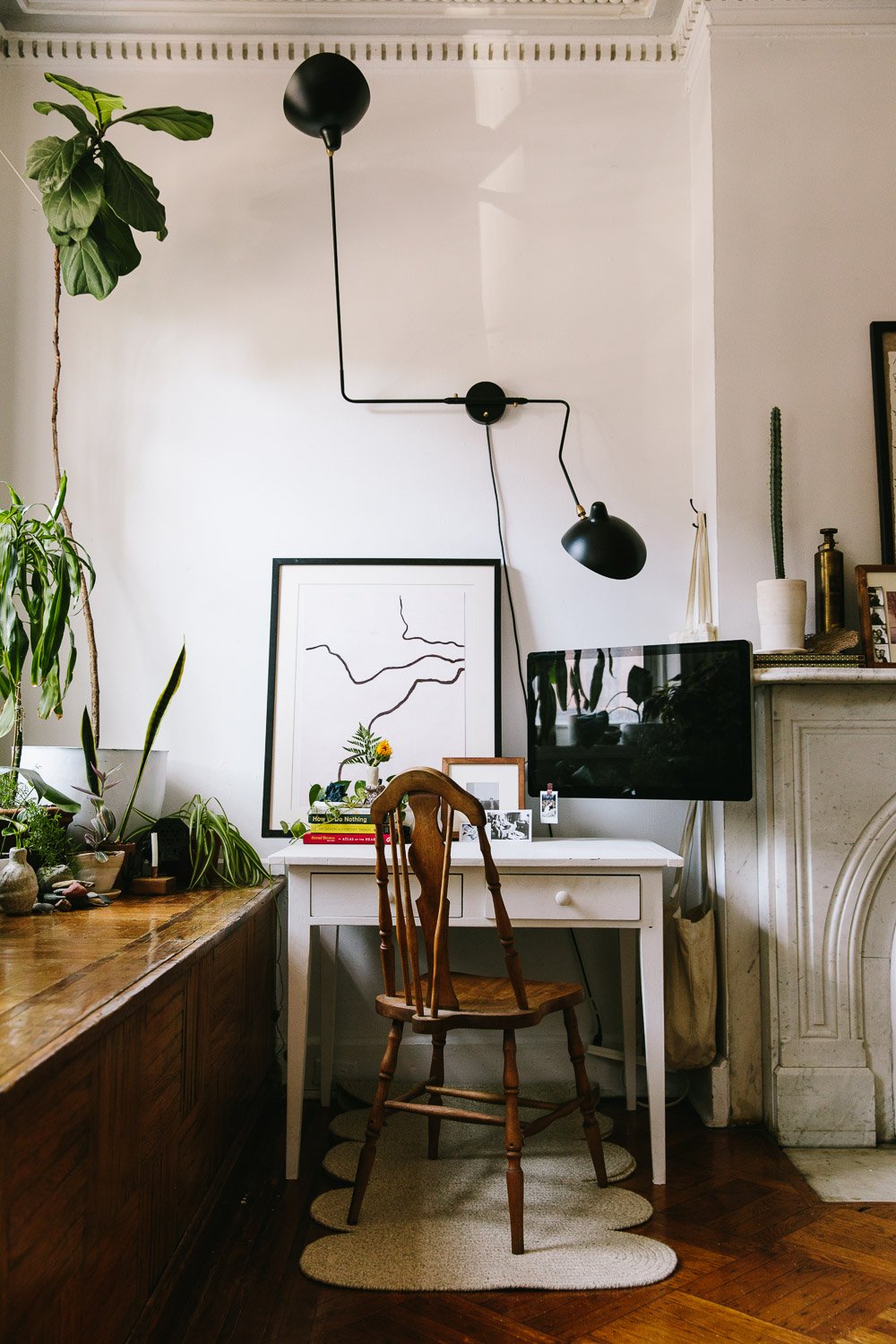 On naming him: We took him for a walk on his first night, and we walked down Hooper Street, and I thought, ‘Cooper!’ I sometimes think, should we have been more creative? His best dog friend in the neighborhood is Ravioli, which is hilarious, but at the end of the day, he’s such a Cooper. 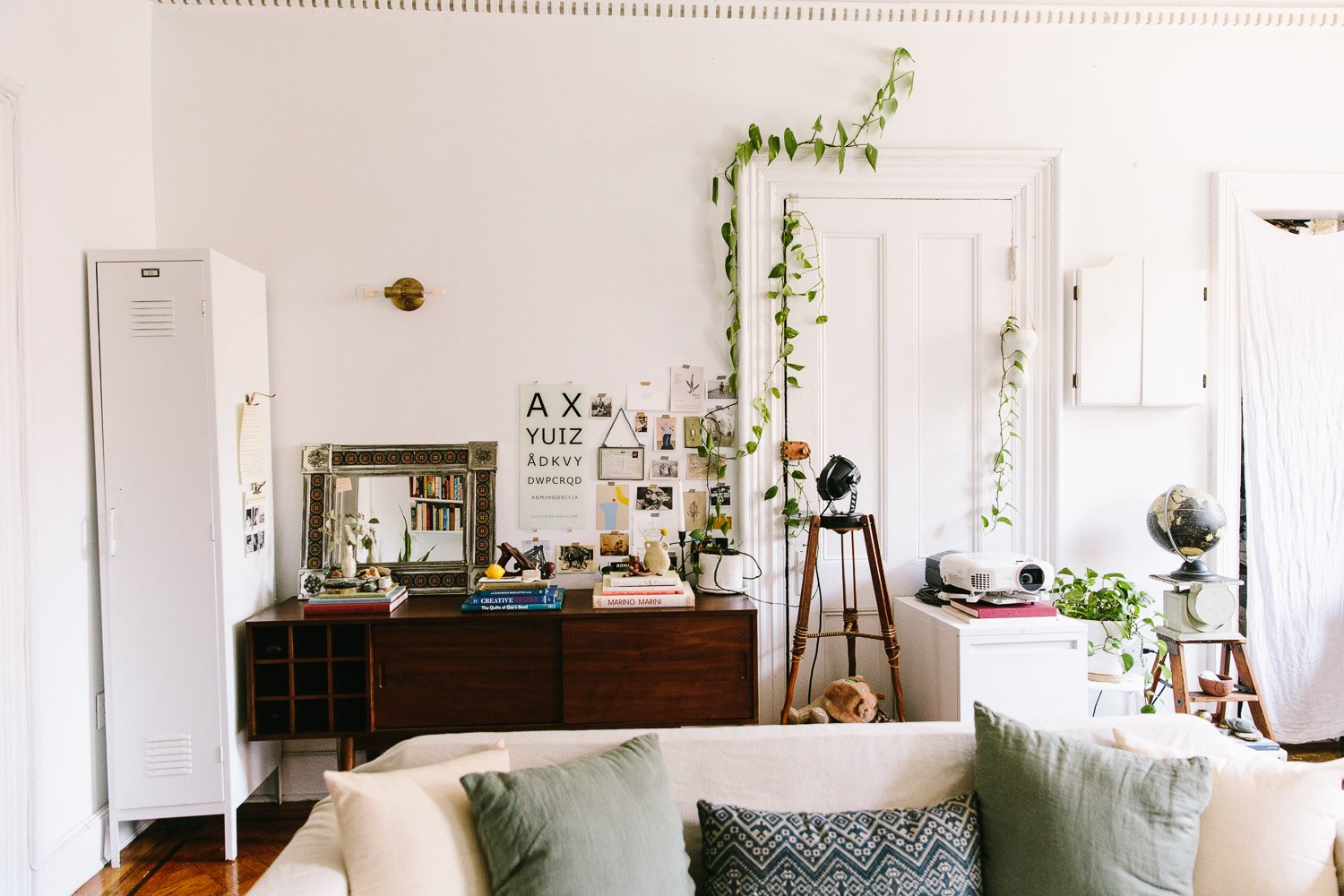 On movie nights: We don’t have a TV, but we have a projector. We take the painting down over the mantle and project the movie on the wall. I really want to watch Everything Everywhere All at Once. 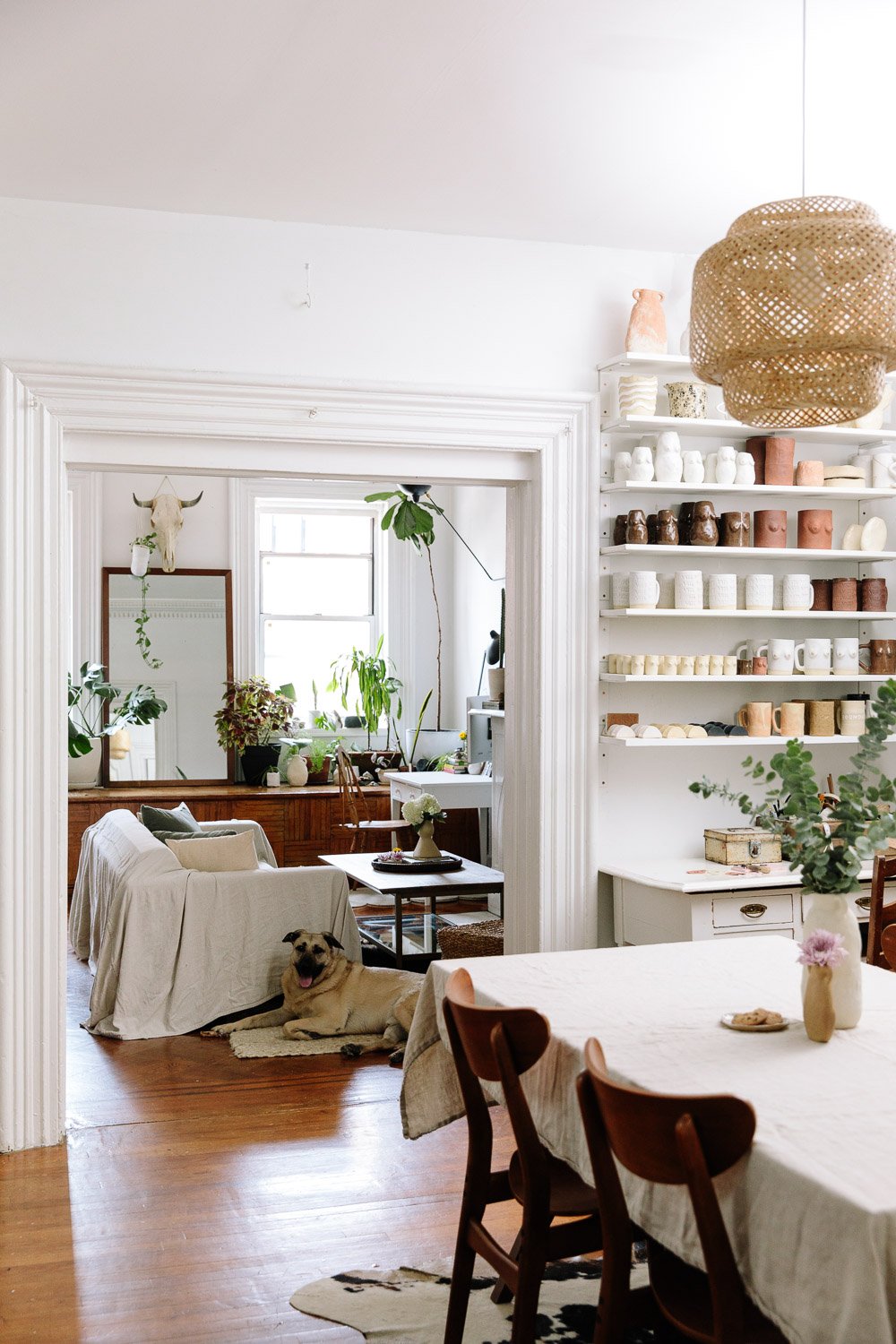 On a couch cover: We found our used couch at Housing Works in Brooklyn Heights — it was $250, and Jack and I carried it home down the streets. It’s comfy and big, but it’s dark blue, so once Cooper moved in, we were vacuuming the couch every single day. I ordered a huge piece of canvas for like $30, and I cut it to size so it would be a little draped. Then we just tucked it in. We’ve now had it for more than two years and wash it every other week. If someone spills wine on it, I just don’t care, and that’s such a nice feeling — I don’t want things to feel untouchable. 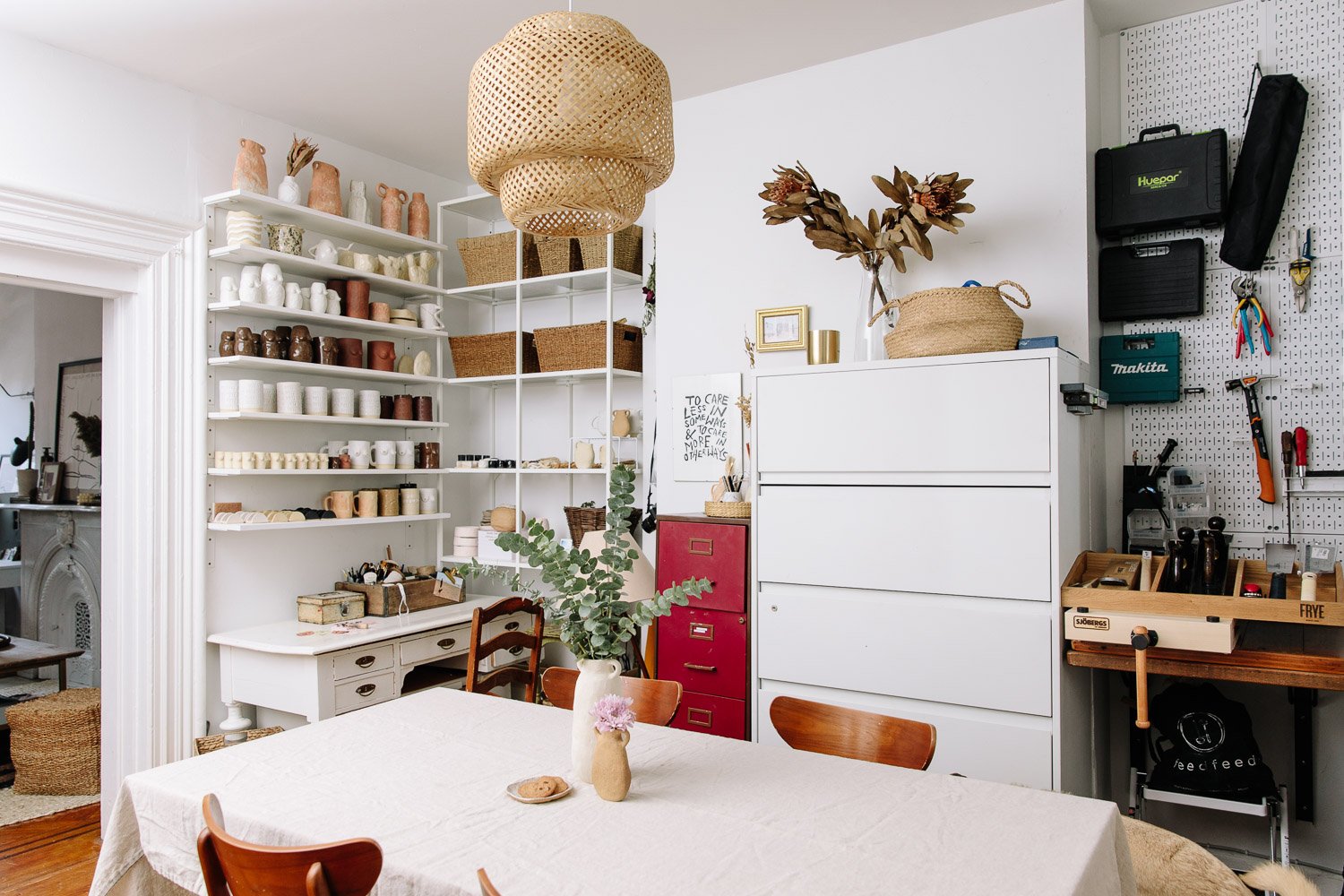 On a career change: Years ago, I went through a pretty big career shift. I was a social worker working in hospice and end-of-life care. I loved it but I craved change. So, I kept following little gut instincts and eventually made my way here. Now I do freelance graphic design work; and I make ceramics and sell my work through my website and wholesale; and I teach my own workshops and also teach at Brooklyn Clay. Income-wise and security-wise, it was a scary shift. Honestly, it’s still scary and even though people make it look not scary and totally normal, I’m terrified most of the time, and I imagine other people are, too. The internet makes things look really simple, like everyone has it together, but that’s not usually true!

On finding support: What helps is surrounding yourself with people who are delighted by you and believe in you. That goes the other way, too — if you have a friend who is trying something new or making a career change or taking a risk, let them know that you support them. 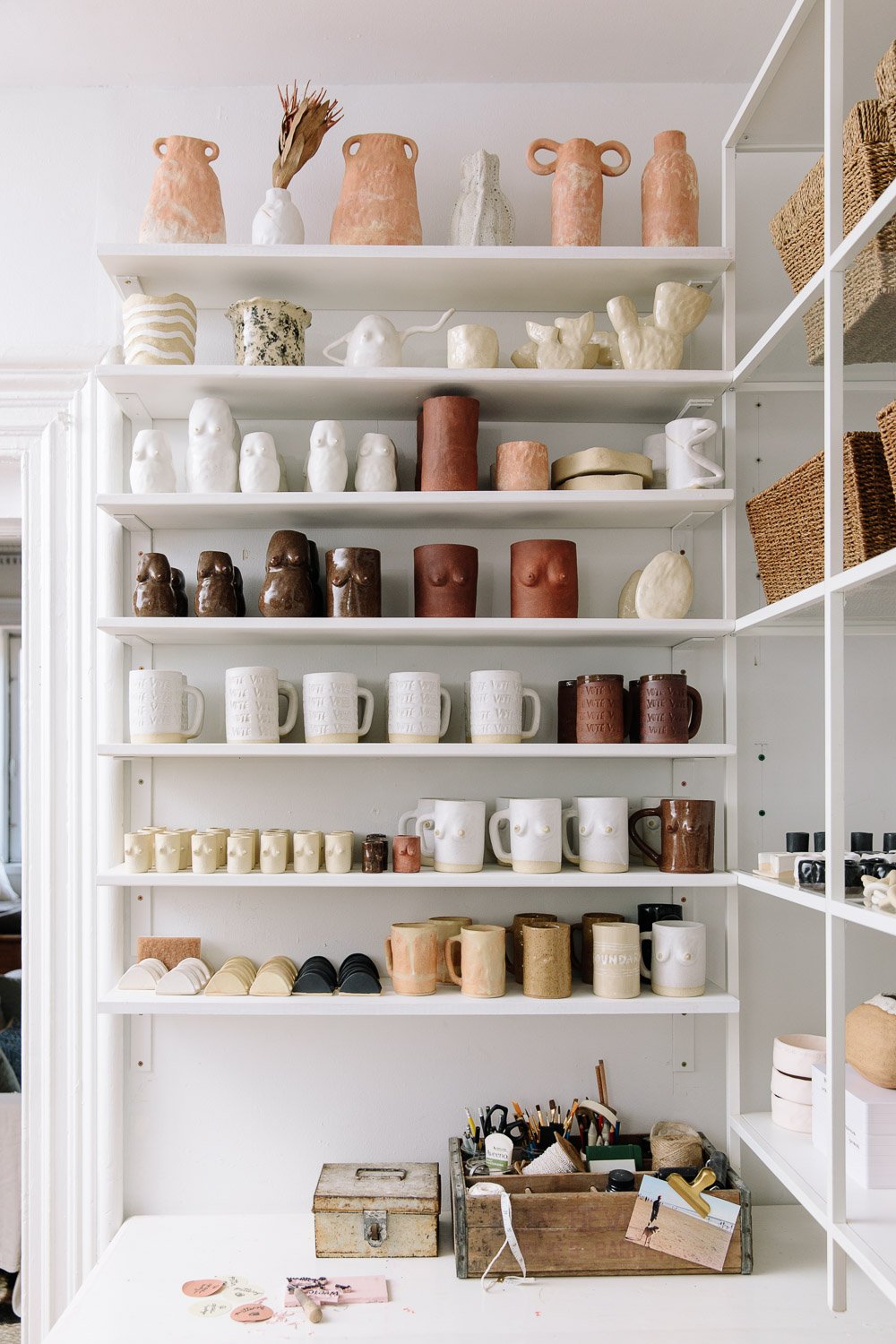 On life lessons: My social work background shows up in my creative work, like my mindfulness offerings and newsletter and workshops. I still refer to a lot of those texts and lessons. I think my experience in end-of-life care is also why I’m not as rattled anymore by smaller things. In the long run, little things don’t matter as much as we may feel they do in the moment — like getting stuck in traffic or other annoyances. Also, I try to never assume anything — you never ever know what’s going on with other people.

On meaningful work: There are so many different kinds of potters out there, and I was watching a video of an instructor and he said, ‘I don’t want you to think about my work, it doesn’t have any meaning, it’s just there to be useful.’ And it was so interesting because I feel the opposite. There are so many things I want people to feel when seeing my work in their house. Sometimes it’s fun, like my boob pottery is to bring joy; and some is more about slowing down and creating ritual in your life. I love hand building, which takes way more time but the pieces feel very textured and personal. They’re sort of pinched and you can almost see my handprints. It takes weeks to make one mug! There’s a lot of waiting with the process, which is a reminder that good things take time and you have to be patient. I also run workshops where I want people to mindfully play, which is something Brené Brown talks about. We’re so hyperconnected, always on screens and running around, and it’s nice to create spaces where we put everything down for an hour or two and touch the earth with our hands. Finally these disjointed parts of my life are coming together and meshing in this beautiful, exciting way. 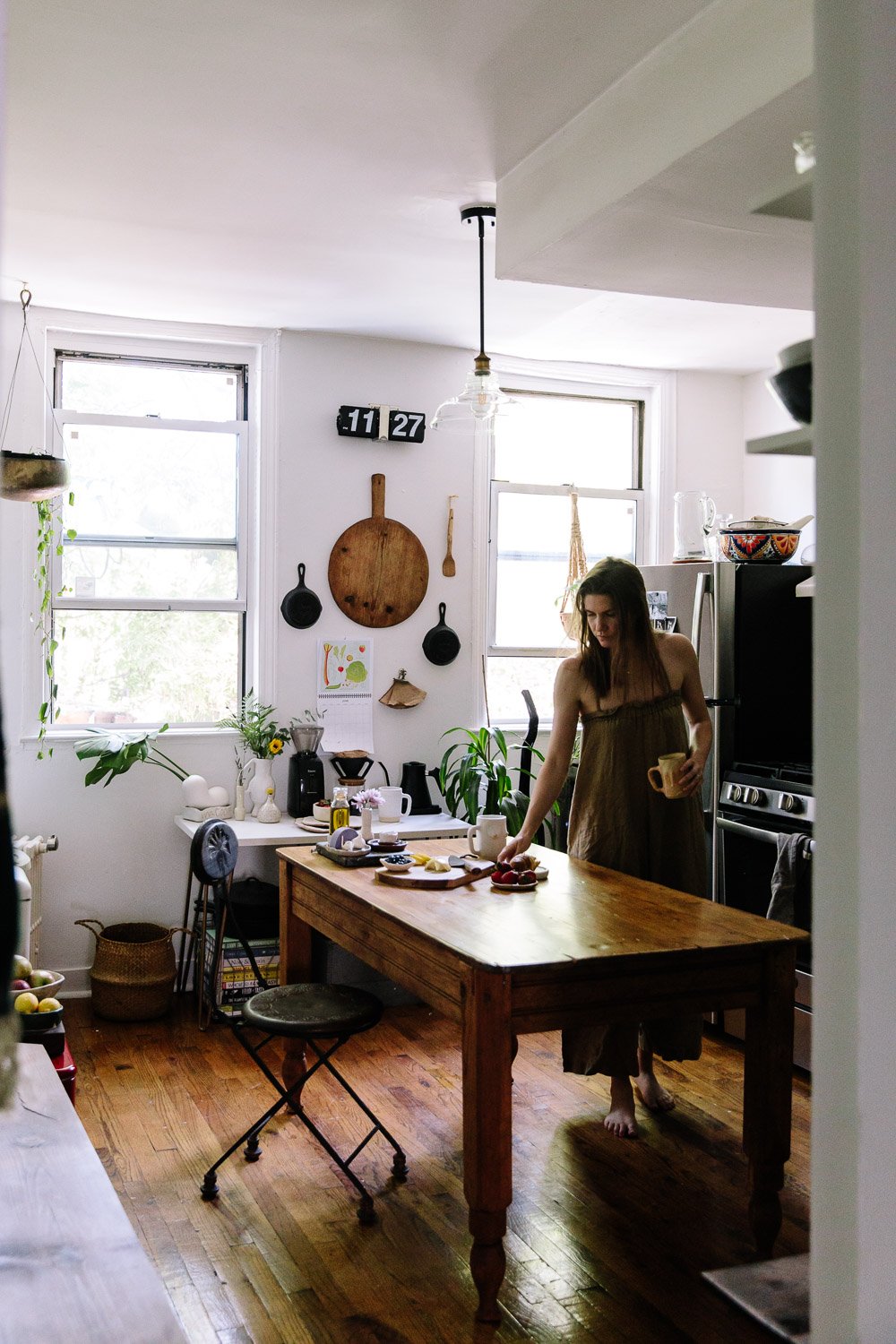 On cooking at home: More recently we started getting Hungryroot because we’ve been so busy trying to get my business off the ground. But fall is my cooking season. I love making stews and chili and bean bakes and lasagnas. Sometimes I’ll get recipes online but often I’ll make things up. 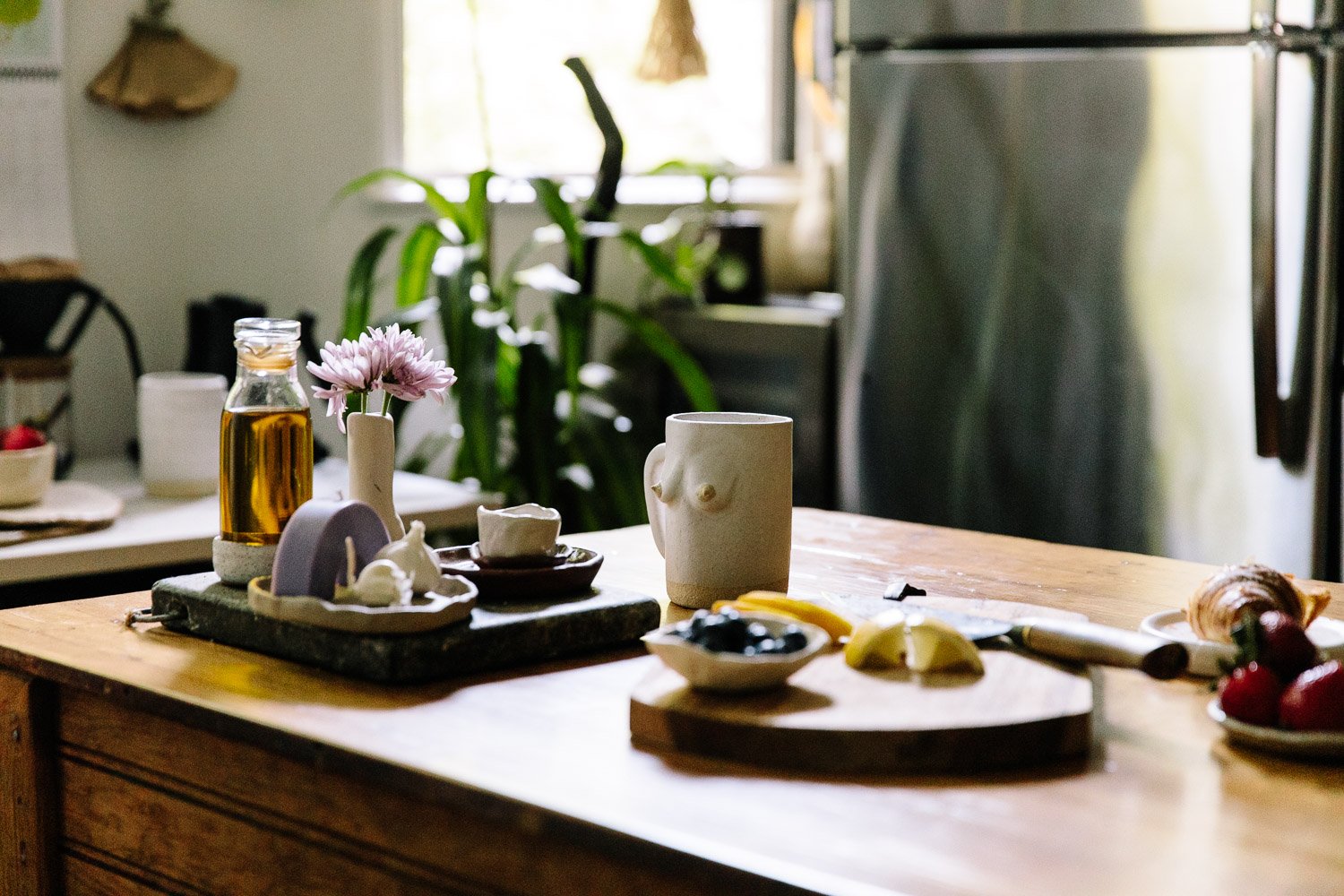 On neighborhood sounds: In our building’s backyard is a restaurant. Every night while I’m cooking dinner, I’ll hear the music and people chatting, and I’ll almost feel like I’m at the restaurant. Sometimes I’ll look out and spot a friend. Oh my god, I went to high school with her! 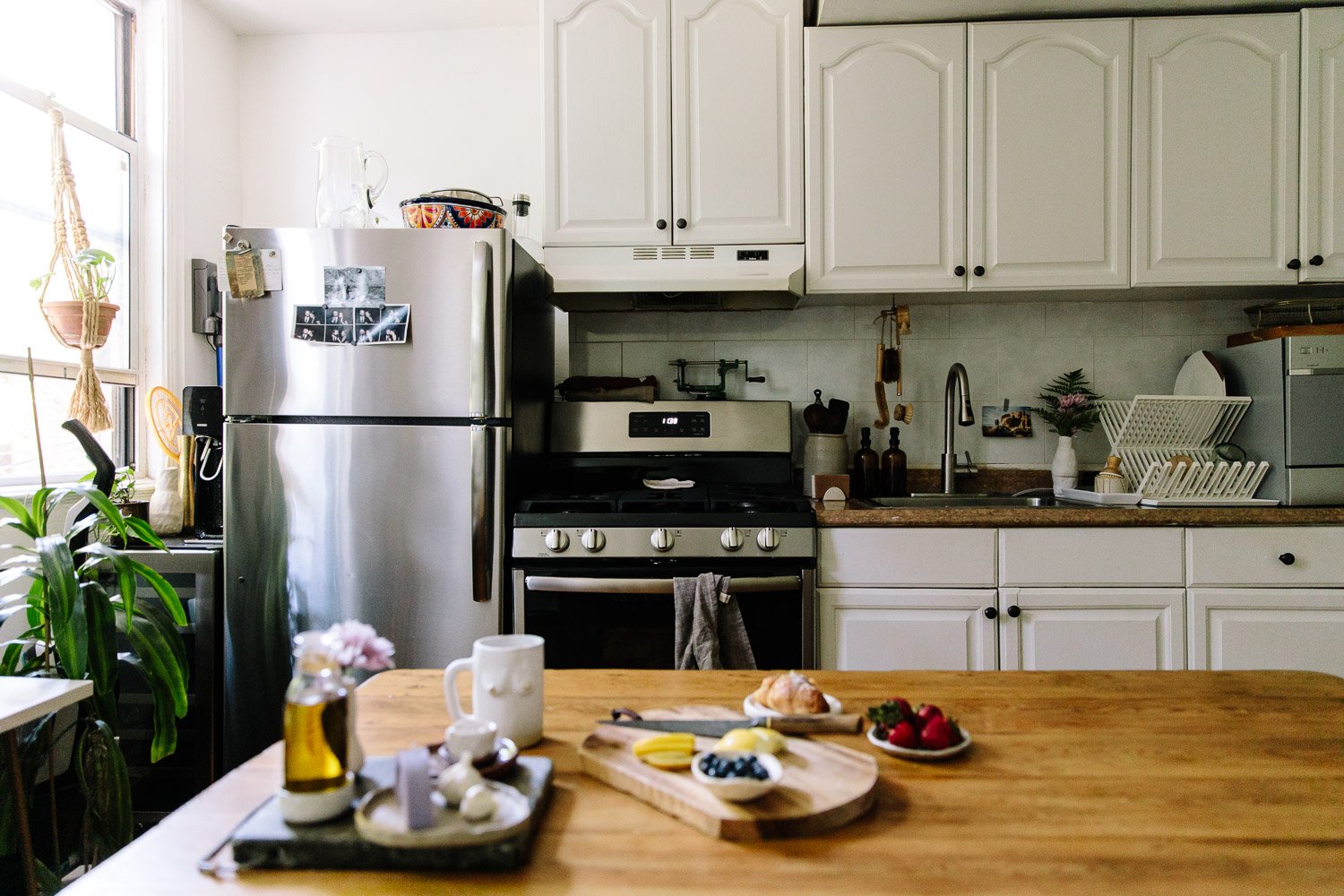 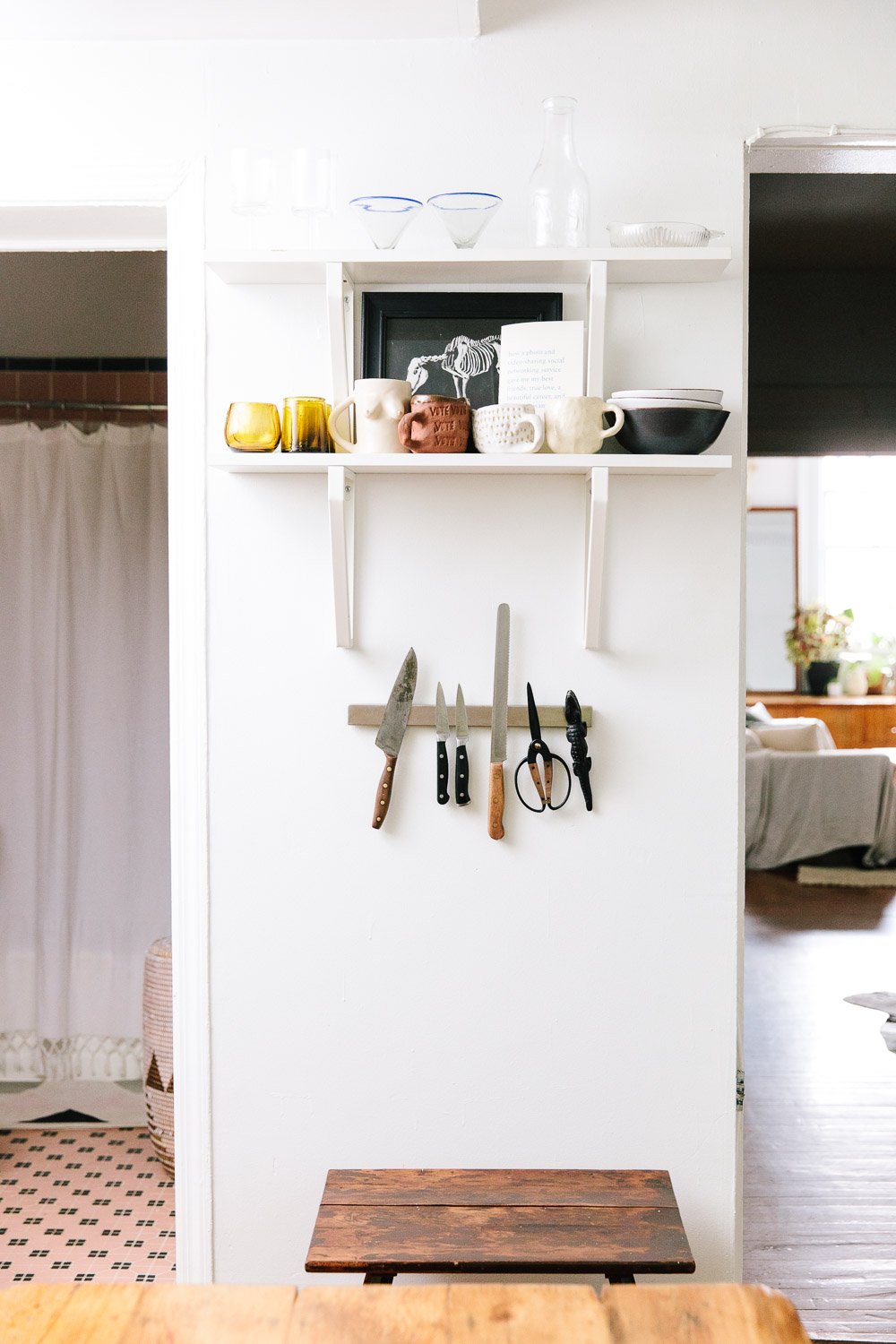 On an evening ritual: Another kind of weird thing is that the bathroom is right off the kitchen, which feels sort of odd. But it’s also sweet because at night after a long day, I’ll be cooking dinner, and Jack will be in the shower, and we’ll be chatting, and it’s such a nice way to unwind. 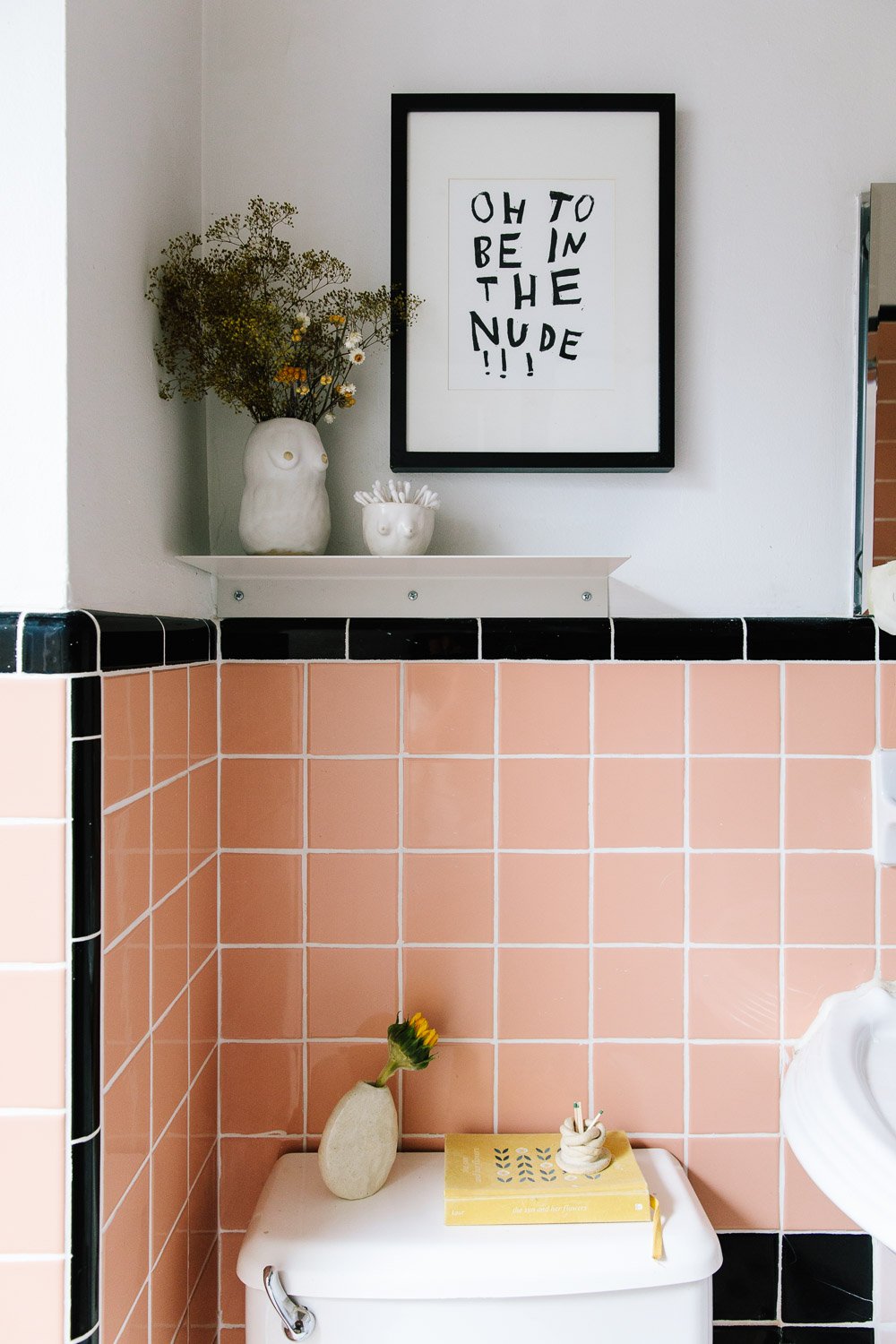 On eloping: Jack and I had talked about getting married, and while we weren’t into the idea of a huge wedding, we wanted to do something with my family. In 2019, my parents were planning a family trip to Palm Springs and Joshua Tree. So, we decided to turn it into a wedding but not tell anyone ahead of time. My family loves games, so at the beginning of the trip, we passed out playing cards with Cooper’s face on them and it said, ‘My parents are getting married on Friday!’ My relatives read them and were so shocked. I loved it because it felt like a big deal but also incredibly natural.

On spreading the news: We were very thoughtful of how everyone else in our life might take it — we didn’t want anyone to feel left out or hurt. So, we slowly started telling people in person as we saw them, which was — and I didn’t expect this part — so special and intimate. We told our friend Taylor and he started crying, which was sweet; and we face-timed our friend Graham and he was so happy. Our friends visited from Portland and we were folding laundry before going to dinner and we were like, ‘So, we’re married!’ 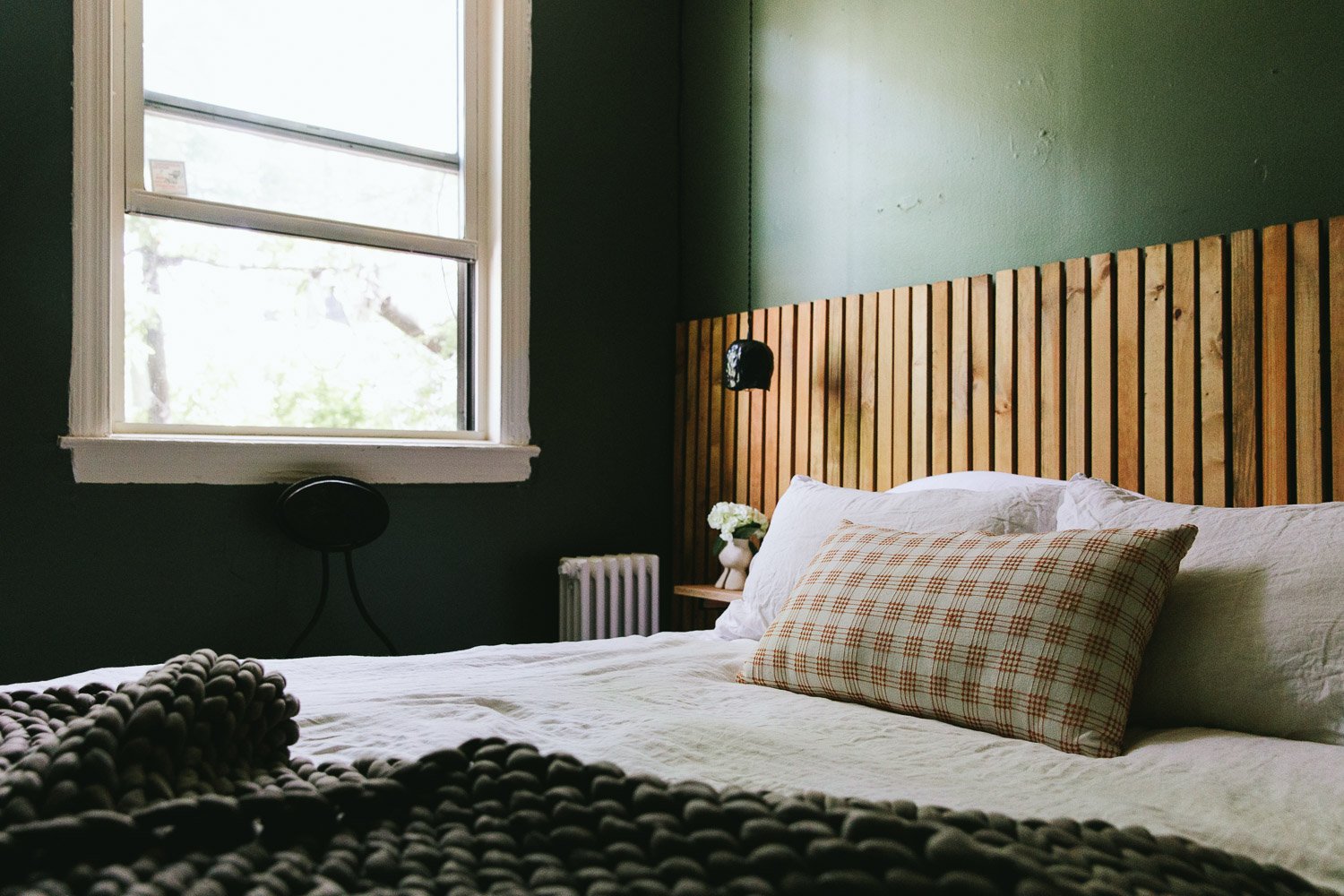 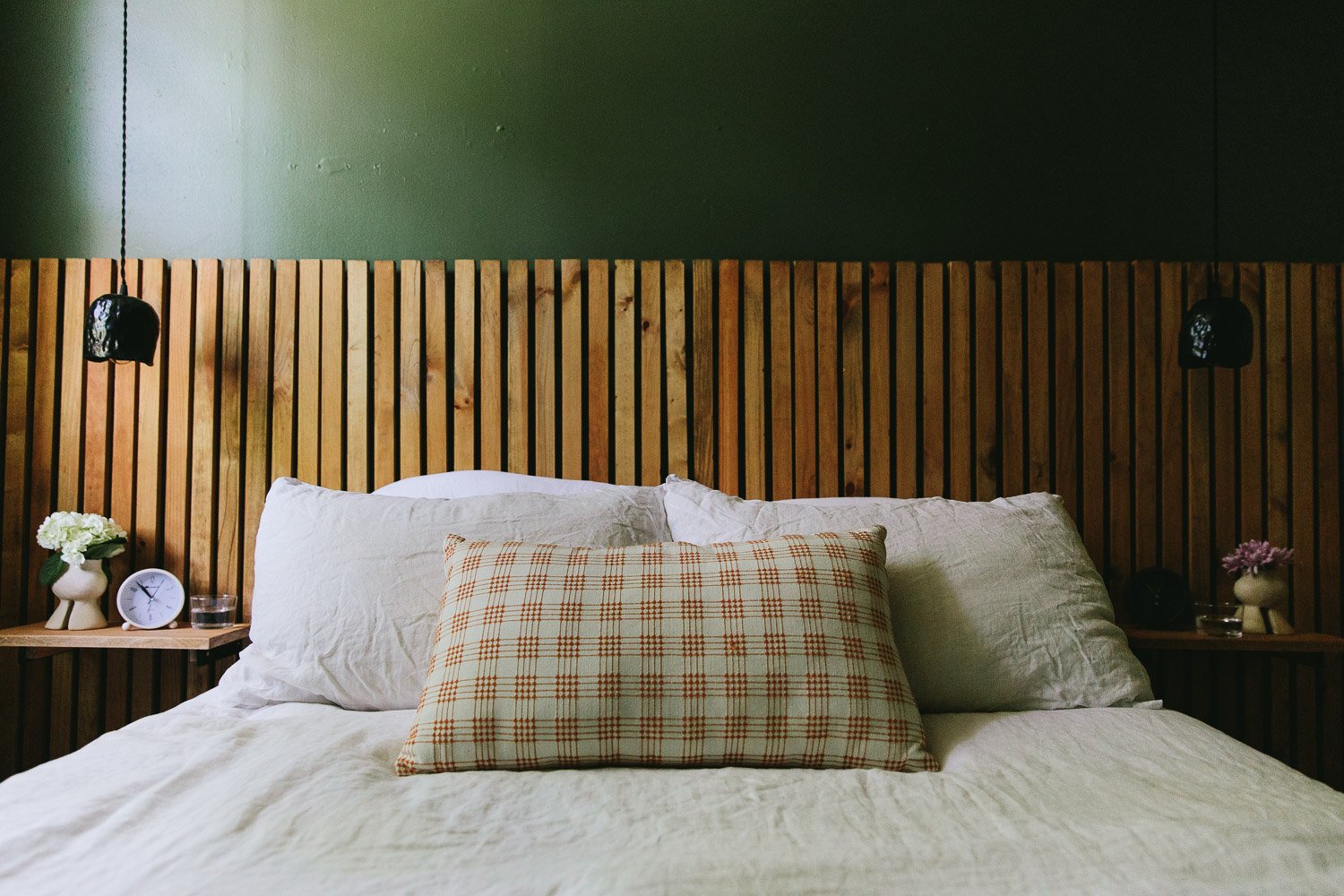 On a green bedroom: Last winter, I wanted the bedroom to feel cozier, so we would feel more held. Our room was painted white, so I decided to go with green. It gets super dark and cozy at night, but in the morning, the light reflects off and it feels energizing.

On a homemade headboard: Jack and I made the headboard. We’re a good team in that I’ll design things and Jack will bring my ideas into the physical world — I make the design and he makes it happen! He cut all the slats to size and put them onto boards and then installed them on the wall. The side tables are connected, and I made the lights out of porcelain. It’s so cool seeing my work suspended in the air and the shadows around them.

On open windows: We don’t have any curtains because we’re big on natural light. When people come to stay, like my parents or brother, we’ll give them our bedroom, and we’ll sleep in the living room. They’re always like, do you have any curtains we can put up? But we’re one story up so people walking by on the street can’t see in, it’s only our neighbors across the way. Living in NYC, we are used to it and just don’t care! 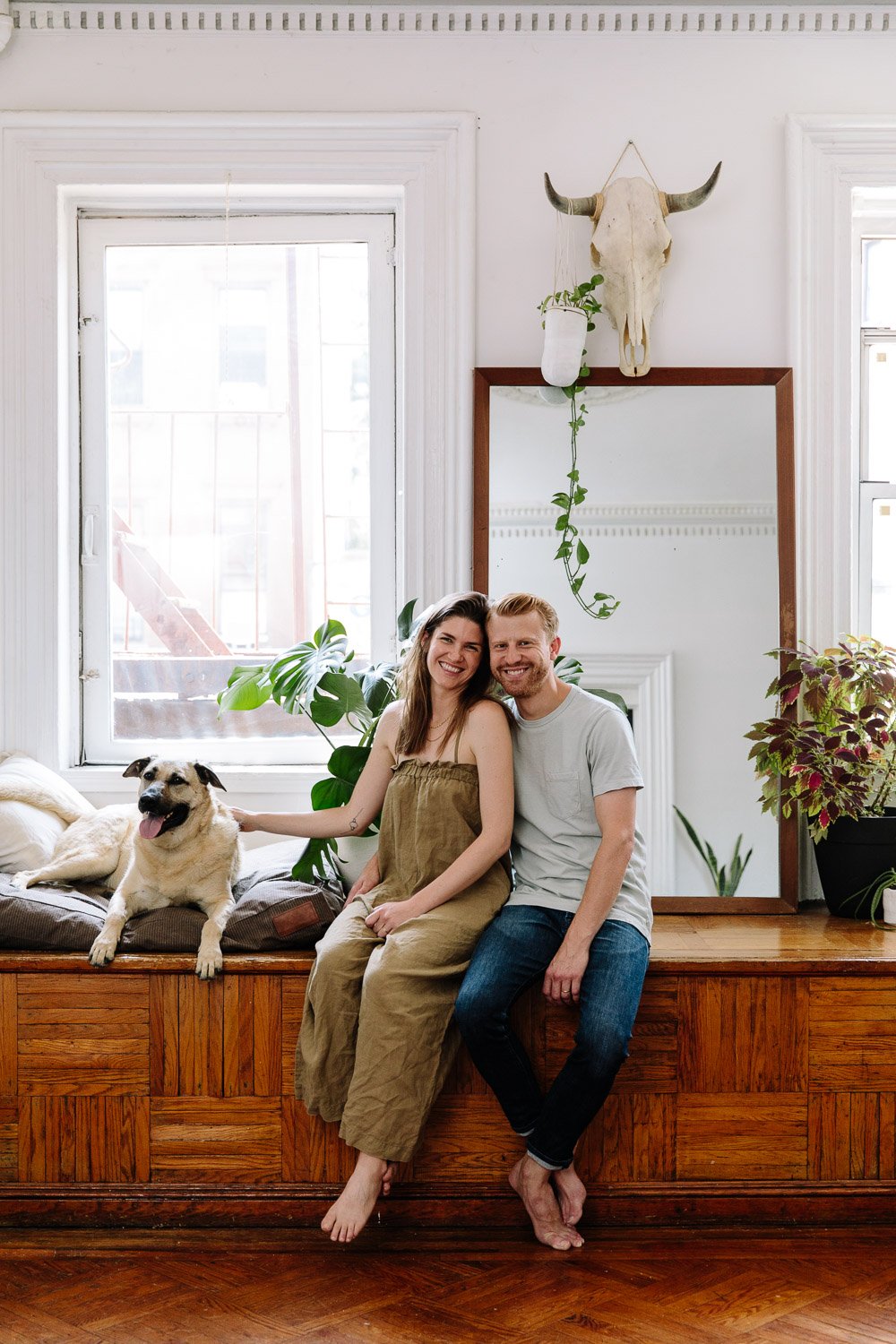 Thank you so much, Grace! We love you.

P.S. More house tours, including an apartment that feels like a treehouse and a family home bursting with gorgeous rainbow colors.

(Photos by Christine Han for Cup of Jo.)