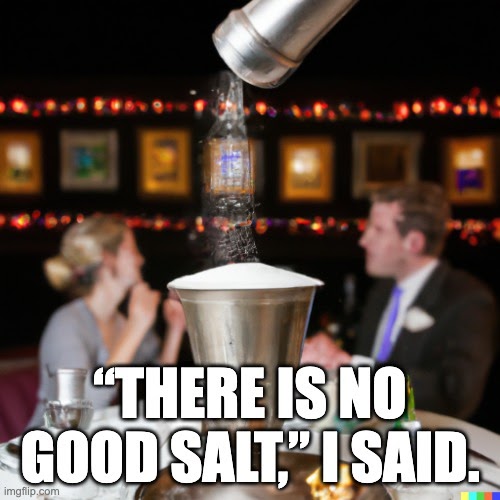 David dines with his cousin Sarah, a food critic who refuses to take seriously his phobia of salt; by Tony Bicât.

“It’s not about the beef, it’s about the salt; and anyway the salt’s not in the beef.”

Sarah seemed to think I would have known this. Lunch with my cousin is often difficult; she’s a food critic, so even when she’s off duty it’s not easy. The wine’s too warm or too cold, it’s the wrong kind of grape, comes from the wrong side of the hill or even the wrong side of the Andes. I remember a perfectly good coq au vin being ruined by a lecture on the Great French Wine Blight of the mid 19th century.

I did not reply, I just hoped that we’d get to the îles flottantes or the époisses without a string of foodie information preventing me from bringing up the urgent subject that had led to my inviting her to lunch at The Trough – yes I know, an absurd name, to go with the minimalist line drawing of an antique salt trough on the menu.

The Trough was a restaurant Sarah had shredded in her column some months ago and I knew she’d been trying to get back in. She was curious to know why her dismissive article had had zero effect on the place’s popularity. However, she’d been banned from ever darkening their tablecloths again, so I’d booked the table myself, with some difficulty and by pulling strings. I arrived early and by the time she’d swept in and sat down opposite me, it was too late for them to do anything but suck it up.

Don’t get me wrong; I’m fond of my cousin. She’s generally good company, except when you get her on her special subject. We grew up together; her parents lived and worked mostly in Hong Kong so she spent almost every school holiday with us. She was the elder sister I never had, and in the past I had often sought her advice. We have a sound relationship, a bond and affection only ever constrained by the incessant food talk.

I got my head down and concentrated on scraping the Beurre Maître d’Hôtel, that I’d deliberately asked them to omit, off my Chateaubriand while eagerly listening for her to pause for breath in the lecture so I could jump in.

“In a refrigerated room, the walls are lined with blocks of Himalayan salt, the meat is dry-aged in a naturally antibacterial chamber that allows it to mature slowly, keeps it fresh virtually forever – and of course produces the delicious beef you are treating as if it was a Whopper with fries.”

Of course, if you eat with Sarah at the best of times, any restaurant is on tenterhooks. Even if she protests she’s not working, no one will believe her. The obsequiousness of the waiters and waitresses is horrible to behold; they tremble like aspen leaves, whispering together and trying desperately not to put a foot wrong. Meanwhile, managers and chefs steam up the kitchen portholes wetting themselves in terror.

Eating in was not an option. I once had the temerity to cook something for her, and she had described my carefully crafted navarin d’agneau as “lamb with the fur on”.

But this lunch was a life-and-death moment. I was desperate, and instead of the carefully rehearsed speech I had been planning I blurted out the reason for our meeting:

“My wife is trying to kill me.”

That, at least, stopped her in her tracks.

“I don’t have another one.”

“Ridiculous,” she said, then after a pause:

Instantly, you see, a joke. I am resigned to the injustice of being a joke to most of my family; unfairly, because I have the misfortune to be the weakling in a rudely robust bloodline. It’s not my fault; I inherited a heart murmur, the congenital condition of Great-Aunt Shirley, that singled me out to be the only one so afflicted in the tribe. So cursed, I have to be careful; diet, moderate exercise, and as little stress as possible. Mostly my rowdy relatives, even if they sniggered occasionally behind their hands, treated my “fads” at family gatherings with sympathy – mostly.

Great-Aunt Shirley followed a similar regime to me, augmented it has to be said by twenty Silk Cut a day. She finally died at ninety-two and surprised us all by leaving everything in her will to me. Perhaps she did this out of sympathy for the “runt of the litter”, as she always – I think affectionately – called me. Of course, the rest of them said it was just because that was the most annoying thing she could think of doing.

From the very day of the reading of the will, there was a subtle change in the attitude of my extended family. It was almost as if they suspected me of malingering, of being some kind of hypochondriac.

For example, I had long trained myself to do without salt, and my wife had played along with this. Mary added salt only at the table.

The result is that my palette is very sensitive; not only could I never eat a “Whopper with fries” or indeed a microwaved ready meal, but I can detect even a few grains of sodium chloride in any dish.

So imagine my surprise when one day I took a fork full of Mary’s special macaroni cheese, a favourite of mine, and exclaimed; “This has salt in it!”

“I know,” she said gravely, “but it’s good salt. It’s the chemicals they add to ordinary shop salt that poison us.”

“That’s where you’re wrong; in France they give hand-harvested sea salt to heart patients, and in California -”

I pushed my plate away and said, “I can’t eat this.”

“Very well,” she said, but there was a look in her eye that should have warned me. “I will give you the literature.”

And she did, a real dossier. She must have been collecting articles and trolling websites for months, all propounding this crackpot theory about sea salt actually being good for you.

“Yes, in water, if you’re dehydrating in the desert,” I replied testily.

She waved at the waiter to refill her empty glass with more of the Saint-Émilion she found so disappointing.

“I really don’t see the problem, though it is an interesting intellectual debate and one you should have with your wife. I don’t see what I can do…”

“Mary’s putting it in everything,” I interrupted. “In my muesli, hoping the honey will disguise it. She thinks I can’t detect it if it’s masked by stronger flavours but I can, I CAN.”

I realised that several other diners were looking at me, and that I’d unconsciously crescendoed from a conspiratorial hiss to a shout.

“You’re mad,” said Sarah. “You’re imagining it. You should have a heart to heart – no pun intended – and thrash the whole thing out with her.”

“I’m like that frightened wife in the Hitchcock movie,” I went on. “You know, the one with Cary Grant. I’m being slowly fed arsenic, only it’s not arsenic, it’s bloody salt.”

“Good salt,” said Sarah. She looked concerned as I murmured my mantra:

“There is no good salt.”

It was such a relief to be able to talk to someone that I had forgotten about my problems and the cost of the meal but then, like a knife in the guts, I saw that Sarah was laughing, laughing hysterically. I watched my world crumble as she wept, wiping the tears from her face with the vast starched napkin.

I was ready to gather what shreds of dignity I could and stand up and go, when I heard the banging of a door to the kitchens behind me, and Sarah suddenly stopped laughing. She was staring over my shoulder. I craned my neck round as the chef/patron skidded to a halt beside us. I felt my heart jump, and suddenly up tempo and beat furiously in my chest. In that weird way you notice details in a time of crisis, I saw that he was clutching in his left hand, the one nearest me, a large Masamoto knife.

“How dare you,” he screamed at Sarah. “Not content with your ill-informed and slanderous lies, you trick your way in here with this – this -” he gestured contemptuously at me, “weasel, and openly laugh at my art. Look around you! The proof of the pudding is in my customers. I’m booked up for months – do your worst, drip your poison, you will not lay a touch on my genius; but do not expect me to bloody cook for you. Get out!”

I could see that Sarah was taken aback, but after a bit she regained her composure and replied calmly. “Luigi, I was not laughing at you, much less at your excellent cooking. I was laughing at my ridiculous cousin David. You see, he believes his wife is poisoning him.”

“Not in my restaurant she isn’t,” Luigi shouted.

“No,” replied Sarah calmly, “at home with her special macaroni cheese.”

This gave him pause. “Macaroni cheese!” He said this like a vegan saying “sweetbreads”.

“Salt.” His voice cracked, and I saw his knuckle whiten on the handle of the Masamoto. “There is absolutely no reason to put salt in macaroni cheese if you insist on cooking such a thing,” the chef continued.

“You see,” I said triumphantly to Sarah.

“Not if you use a decent cheddar,” he added casually.

“David thinks his wife is surreptitiously feeding him salt; this will eventually cause him to have a heart attack and die. So – murder. She, on the other hand, thinks that good salt, that is, hand-harvested sea salt, may well cure him of his hypochondria.”

Before I could protest Luigi put down his knife and sat down at the table. Sarah smoothly requisitioned one of the clean glasses and poured him some Saint Émilion.

“What do you think, Luigi? Can salt be a poison? Surely no chef would say that?”

“Not if he was worth his salt,” replied Luigi.

They both burst out laughing.

I couldn’t believe it a moment ago they were sworn enemies and now they were chatting like old friends – about SALT.

The blood pounding in my head became unbearably louder and louder – but still, piercing through into my consciousness, mocking me – the litany of salt:

First I plunged it into the sneering chef, then, amazed at its sharpness, I slashed wildly at my cousin, who put her arms up to protect her face. Soon the restaurant was like a scene in a Tarantino film. I stood holding the knife by the two corpses and the overturned table as blood-spattered diners ran for the exit.

Somewhere, a police siren wailed. Paramedics wheeled me out of the restaurant on a gurney

I maintain to this day that I had a heart attack or minor stroke, though they claim it was just a panic attack.

Sarah and Luigi patched up their differences. She wrote a new review praising The Trough. My murderous rampage? Well, that must have been an hallucination caused by the blood rushing to my head in the seconds before I pitched face-down into my Chateaubriand grillé.

I was only in hospital overnight. They said they could find nothing wrong with me.

On my first evening home a surprisingly sympathetic Mary made me macaroni cheese.

I took a mouthful. Was there salt in it? I wasn’t sure.