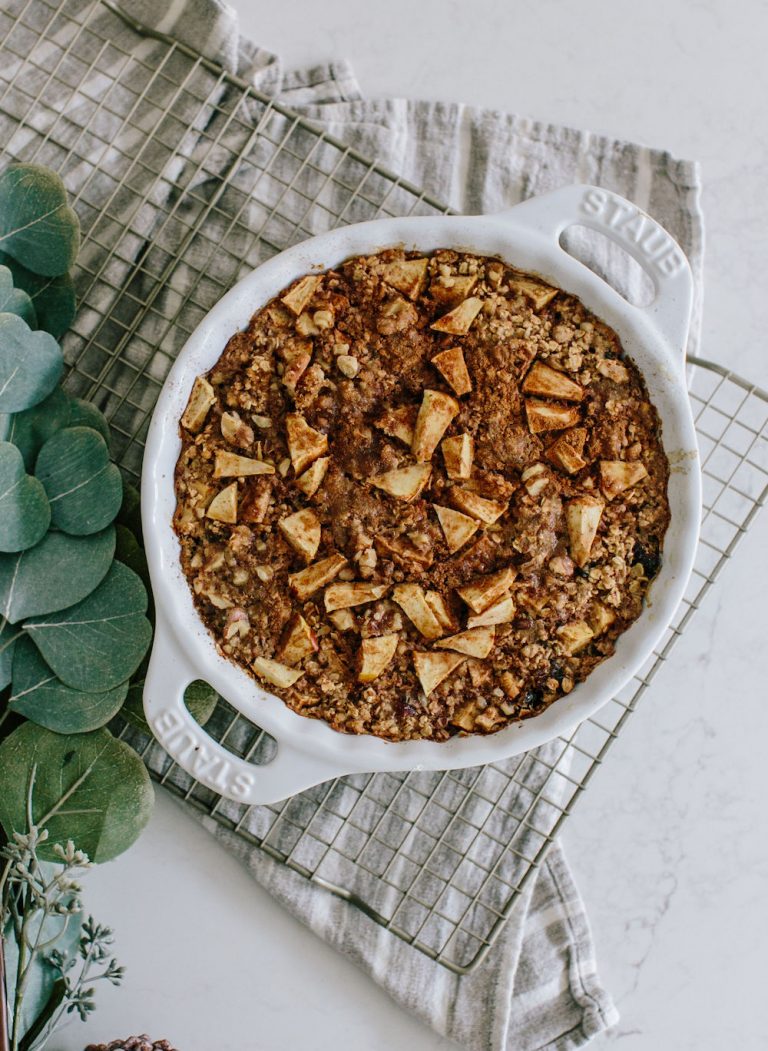 We’ve been in a breakfast RUT around here lately – scrambled eggs, smoothies, and oatmeal on repeat. When you’re juggling work and school and workout schedules with trying to get out the door, there’s no question that speed is the name of the game for weekday morning meals – and they’ve got to be at least semi-healthy, too. That’s why I love a make ahead breakfast that I can leisurely whip up on a Sunday night, then pop in the oven (or microwave, let’s be honest) when we’re in the mad dash to get out the door. This Apple Pie Baked Oatmeal gets crowned the favorite by everyone at my house.

Apples, walnuts, and oats get baked in cinnamon and sugar, and the results taste, well, pretty much like apple pie.

It can easily be made gluten-free (just use “gluten-free rolled oats”) and vegan (use almond milk and sub coconut oil for butter) so everyone can dig in, regardless of dietary restrictions.

I usually bake this on the weekend, put the entire baking dish in the fridge, and then reheat single-sized portions with a little milk the next morning. And the next, and the next, since this baby is perfectly good for 3 or so days in the fridge. And the addition of eggs and walnuts turns oatmeal into a dish with some protein and a good dose of omega-3’s to start the day.

What are your favorite make-ahead breakfasts? I’d love to add a few more to my roster – we’ve started reaching for the Honeynut Cheerios a little too frequently! 😉

Scroll on for the recipe, as well as a few ideas for ingredient swaps so you can make this with whatever you have on hand.

Instead of walnuts, use toasted pecans or slivered almonds.

Sub orange juice if you don’t have apple juice.