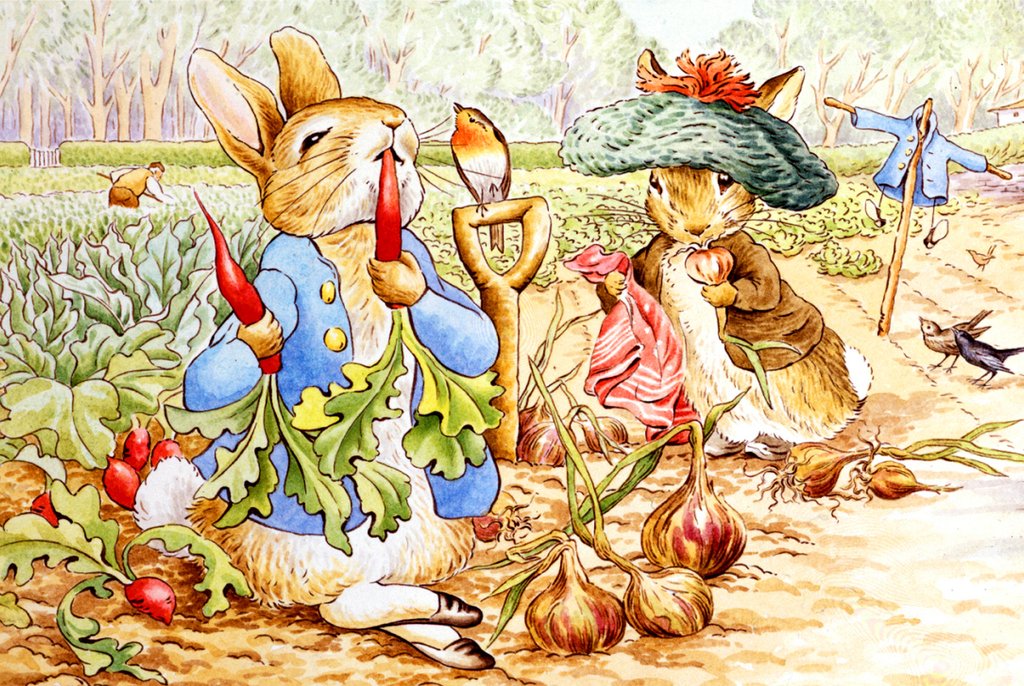 This is one of the good bedtime stories to read. This story has been adapted from the works of Beatrix Potter. One sunny morning, a little rabbit sat on a bank. He pricked his ears as he heard a carriage approaching. The little rabbit could hear the trotting of a pony. As the carriage approached, he saw that Mr. McGregor was driving that carriage and inside the carriage was Mrs. McGregor in her best clothes! Read more about Benjamin Bunny.

As soon as the carriage passed, little Benjamin Bunny slid down the road and ran off jumping and skipping to his relatives. Benjamin’s relatives lived under the root of a big fir tree, in the woods behind Mr. McGregor’s garden. Mrs. Rabbit was a widow. Her husband had a terrible accident in Mr. McGregor’s garden. Old Mrs. Rabbit earned her living by knitting rabbit wool mittens and selling some herbs. With Mrs. Rabbit lived her children and they were called – Flopsy, Mopsy, Cotton-Tail, and Peter. Little Benjamin did not want to see his aunt, so he decided to go around the fir-tree. And he nearly ran into his cousin Peter. Peter was sitting alone, all by himself. He looked sick and had a red pocket handkerchief wrapped around him. “Peter!” exclaimed Benjamin, “What happened to your clothes?” Benjamin asked in horror.

Peter hoped it would rain. They heard Old Mrs. Rabbit call for Cotton-Tail. “Fetch some more Camomile!” she said to Cotton-Tail. Peter rabbit decided to go out for a walk, “I think I would feel better after a walk.” Also read, Peter Rabbit Story!

Little Benjamin decided to go with his cousin. Together they went hand in hand. They got up on a wall and from there they could see Mr. McGregor’s garden. They could see the scarecrow from there. Poor Peter’s coat and shoes still hung on the poles, now it was topped with an old hat of Mr. McGregor’s. “It spoils people’s clothes to squeeze under the gate. The best way to get out of the garden is to climb down a pear tree.”

Soon Peter Rabbit and his cousin Little Benjamin slid inside the garden. The two little rabbits left their footprints all over the garden. “The first thing we do now is to get your clothes back!” Benjamin decided. Soon the two of them pulled the scarecrow with the help of the pocket-handkerchief Peter had been wearing.

Since it had rained the previous night the blue coat had shrunk and the shoes were filled with water. While Peter collected his clothes, Benjamin tried Mr. McGregor’s old hat. “It’s too big for me,” he tossed the hat aside. “Let’s fill the pocket-handkerchief with some onions and give it to his aunt as a present,” suggested Little Benjamin.

Peter felt uneasy. He kept hearing strange noises. But Benjamin was completely at home. He informed Peter that he and his father came to Mr. McGregor’s garden to have lettuce for Sunday dinner. Peter did not eat anything, he wanted to go home. So, Benjamin Bunny led the way. He said, “We cannot climb down a pear tree with vegetables,” so he took a different route. Little Benjamin boldly took Peter towards the other end of the garden. They walked along the tiny planks and under a bright red brick wall.

So, Benjamin Bunny led the way. He said, “We cannot climb down a pear tree with vegetables,” so he took a different route. Little Benjamin boldly took Peter towards the other end of the garden. They walked along the tiny planks and under a bright red brick wall. You may also like, Puss In Boots Story!

Peter dropped some onions for the second time. After collecting them again, they walked among flower pots and tubs. He could hear the noises more loudly now. Peter suddenly stopped. Around the corner, they saw a big cat. Benjamin saw the cat and hid himself and his cousin along with the onions under a large basket.

The Cat woke up and stretched itself. Then walked around it and sniffed the basket. She then sat on top of the basket for five hours. Underneath the basket, it was very dark, Peter and Benjamin were frightened and the smell of onions was quite disgusting. The smell made them cry.

It was late in the afternoon, and the cat had not moved. After some time, the cat felt some mortar from the wall fall on her. When the Cat looked up, she saw Old Mr. Benjamin, he was Little Benjamin’s father and he had come looking for his son.

After locking the cat, old Mr. Rabbit returned to the basket and took out his son and Peter by the ears. After that he took out the handkerchief of onions and together they marched out of the garden. When Mr. McGregor returned, he saw a number of things in his garden that confused him. He saw tiny footprints all over his garden and he did not understand how the cat had managed to lock herself inside the greenhouse!

When Peter returned home, Old Mrs. Rabbit forgave Peter because he had found his coat and shoes. Cottontail and Peter folded the handkerchief together, while Old Mr. Benjamin strung up the onions and hung them from the kitchen ceiling with some herbs. Also read, Stuart Little Story.

Here is a visual depiction of one of the good bedtime stories, “The Tale Of Benjamin Bunny”. See the video story below,