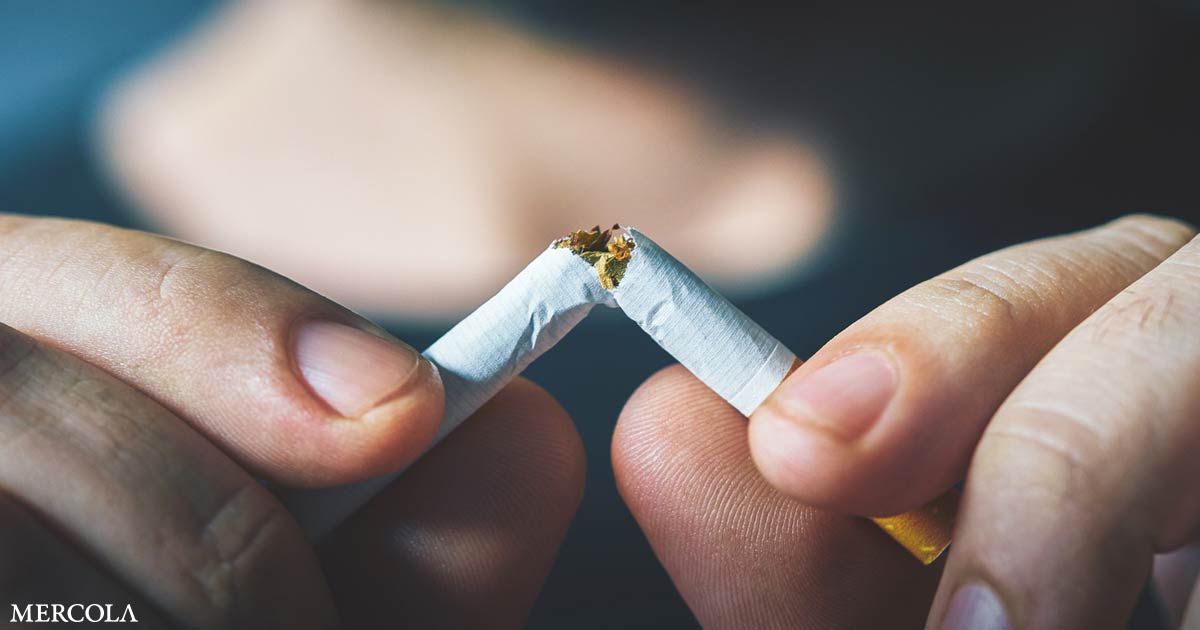 This article was previously published May 30, 2019, and has been updated with new information.

In 2016, 59% of Americans who have ever used cigarettes quit smoking — an increase from 50.8% in 2005. The statistics are encouraging, showing declines in overall cigarette smoking among U.S. adults during that time, but nearly 38 million Americans still smoke every day or “some” days.1

In 2015 (latest figures available), 68% of smokers said they want to quit completely, and most former smokers did so without the use of scientifically backed smoking cessation methods.2

That being said, programs that deliver treatments using cellphones have been proven to be effective for helping smokers quit,3 and apps that harness the use of mindfulness may be particularly effective by leading to changes in your brain.

Researchers from Brown University in Rhode Island, previously determined that mindfulness training (MT) reduces activity in the posterior cingulate cortex (PCC) area of the brain. In smokers, the PCC is activated in response to smoking cues. They reasoned that use of a mindfulness app may therefore help to reduce activity in the PCC in response to smoking cues, helping smokers to quit.

The researchers used functional magnetic resonance imaging brain scans to determine if the app was affecting brain activity, and revealed that in those who the app worked best for, there was a significant reduction in brain activity in the PCC in response to smoking-related images. Study author Jud Brewer, an associate professor of behavioral and social sciences and psychiatry at Brown University, said in a news release:6

We’re moving in the direction of being able to screen someone before treatment and offer them the behavior-change interventions that will be most likely to help them. This will save everybody time and money.”

Why Mindfulness May Help With Quitting Smoking

Most smokers are addicted to nicotine, a substance that may be as addictive as heroin, cocaine and alcohol. When attempting to quit smoking, nicotine withdrawal symptoms may cause feelings of anger and irritation, trouble thinking and tobacco cravings, making giving up cigarettes difficult.7

This, however, represents only one of the complex reasons why smoking cessation is so hard. Nicotine dependence also develops, in part, due to positive and negative reinforcement. According to a study in Drug and Alcohol Dependence:8

Though the centrality of craving remains controversial, evidence suggests that craving is strongly associated with smoking, which, mainly through the psychophysical properties of nicotine, results in the maintenance or improvement of positive, or reduction of negative affective states.

This sets up positive or negative reinforcement loops respectively, by reinforcing associative memories between these affective states and smoking.”

Recently, treatments aimed at helping smokers tolerate positive and negative affect9 and cravings have been developed, and mindfulness training (MT) is among them.

“MT has been hypothesized to not only bring habituated behaviors into consciousness such that they can be worked with effectively, but also target the associative learning process with an emphasis on affect and craving as critical components of positive and negative reinforcement loops,” the researchers explained.10

The Drug and Alcohol Dependence study evaluated mindfulness training in comparison to the American Lung Association’s Freedom From Smoking (FFS) treatment. Study participants — nicotine-dependent adults who were smoking an average of 20 cigarettes a day — received one of the treatments twice weekly for four weeks.

Those who received mindfulness training had a greater rate of reduction in cigarette use during the study, which was maintained during follow-up 13 weeks later, leading the researchers to conclude, “Mindfulness Training may confer benefits greater than those associated with current standard treatments for smoking cessation.”11

Adding further support for the usefulness of mindfulness for smoking cessation, a meta-analysis including four randomized controlled trials showed that 25.2 percent of MT participants remained abstinent for more than four months compared to 13.6 percent of those who received usual care therapy.12

Other studies suggest that mindfulness treatment has similarities to cognitive behavioral therapy (CBT) in terms of the mechanisms underlying its effectiveness; however, even compared to CBT, mindfulness participants reported lower anxiety, concentration difficulties, craving and dependence, and were more able to manage negative emotions without smoking.13

“Mindfulness involves purposeful, present-focused attention, which might increase the tendency for purposeful action and help people to feel more in control of their behavior,” the researchers stated.14

What Are the Benefits of Quitting Smoking?

Tobacco use is the leading cause of preventable illness and premature death in the U.S.15 Compared with people who have never smoked, smokers lose at least 10 years of life expectancy, whereas quitting smoking before the age of 40 reduces the risk of death associated with continued smoking by about 90%.16

You’re never too old to quit smoking, however, and can gain significant benefits no matter when you quit. In one study, researchers analyzed 8,807 people between the ages of 50 and 74 years for 9.1 years.

They found that even those well into their 70s could reverse some of the damage of a lifetime of smoking after quitting. The researchers found the individuals slashed their risk of heart attack and stroke by nearly 40 percent within five years of quitting.17,18

There are more than 7,000 chemicals in tobacco smoke, at least 70 of which are known to cause cancer.19 So reducing your cancer risk is one of the benefits of smoking cessation, although it’s far from the only one. Other health benefits of quitting smoking include a reduced risk of:20

Vaping Is Not a Safe Alternative

While rates of tobacco smoking are on the decline, from 2016 to 2017, Juul e-cigarette sales increased 641 percent, from 2.2. million devices to 16.2 million.21 This is likely an underestimate, as it only included sales from U.S. retail stores, not purchases made online or in vape shops. Juul’s e-cigarettes are so popular that if you asked most youth what “juuling” is, they’d probably know what you’re talking about. It’s the e-cigarette equivalent of “smoking.”22

Part of the problem is that when it was first introduced, one Juul cartridge contained more than double the amount23 of nicotine found in other e-cigarettes — about the same amount you’d find in a pack of cigarettes. Since then, in an effort to compete, other e-cigarette companies have added their nicotine content, too.

While some people consider juuling or “vaping” to be a safer alternative to smoking, they pose the same risks (if not higher) of nicotine addiction, and also expose the user (and those nearby) to other potentially harmful compounds, including highly reactive free radicals.24 In traditional cigarette smoke, these highly reactive free radicals are associated with cancer, COPD and heart disease.

If you’re an adult looking to quit smoking, remember that Juuls and similar e-cigarette devices are also designed to get you to keep using them — much like cigarettes.

The National Academies of Sciences has noted that while e-cigarettes may help adults to stop smoking cigarettes, they may cause youth vapers to transition to the use of cigarettes. And in the former case, you could have a population who are similarly addicted to e-cigarettes as they once were to combustible cigarettes.25

This is one reason why the U.S. Food and Drug Administration says there is no safe method of smoking, including vaping:26

“In addition to exposing people to risks of tobacco-related disease and death, FDA has received reports from the public about safety problems associated with vaping products including:

• Seizures and other neurological symptoms

These problems can seriously hurt the person using the ENDS product and others around them. There may be added dangers, for example if a vape battery catches fire near an oxygen tank, a propane tank (such as used in backyard grills), or a gas pump, or if a person has a vape-related seizure while driving. FDA has a webpage with tips to help users avoid vape fires or explosions.”

If you’re trying to quit smoking, enlisting the help of a mindfulness app-based program makes sense. The one developed by Brewer and colleagues, called Craving to Quit, is a 21-day program that combines the mindfulness app with personal coaching and an online peer community (for a fee).27 So what exactly is mindfulness? Rehabs.com explains:28

“Based in ancient Buddhist psychology, mindfulness helps individuals pay careful attention to their cravings, such that they can see what they are made up of — thoughts and body sensations.

Importantly, with this awareness, they can notice cravings as they arise, see how they change from moment to moment (instead of lasting ‘forever’ as some of my patients have described), and as a result, stay with them and ride them out instead of acting on them. Also, paying attention also helps individuals see clearly what they are getting from their behavior in that moment.”

Some people using mindfulness to quit smoking have remarked, for instance, that it smells and taste like chemicals.

“She noticed that smoking wasn’t as great as she might have convinced herself previously. And this is the beginning of the end — we start to get disenchanted with what we were doing — just by paying careful attention. This dual purpose of mindfulness — disenchantment and being able to be with ourselves instead of reacting automatically — may be a winning combination.”29

Being mindful means being present in the current moment and accepting it at face value, not giving too much weight to negative thoughts or experiences (but not ignoring them either). Mindfulness meditation is a more formal practice of mindfulness, in which you consciously zone in on, or focus your attention on, specific thoughts or sensations, then observe them in a nonjudgmental manner.

You can start out your day with a mindfulness exercise, such as focusing on your breathing for five minutes before you get out of bed. Focus on the flow of your breath and the rise and fall of your belly.30

Throughout your day, notice when you start to have cravings for a cigarette, but recognize that these are just thoughts and you don’t have to react to them. Also let any judgments about your cravings or smoking habits dissipate.

Mindfulness is a tool that you can use daily, not only for smoking cessation but to optimize your mental and emotional health. An excellent supportive tool, especially for dealing with cravings that come with quitting smoking, is the Emotional Freedom Techniques (EFT). An example of using EFT for cravings can be seen in the video at the top of this article.

With EFT, simple tapping with the fingertips is used to input kinetic energy onto specific meridians on your head and chest while you think about your specific problem and voice positive affirmations. This can help you to reprogram your body’s reactions to cravings, helping you to quit smoking successfully, especially when combined with the ongoing practice of mindfulness.