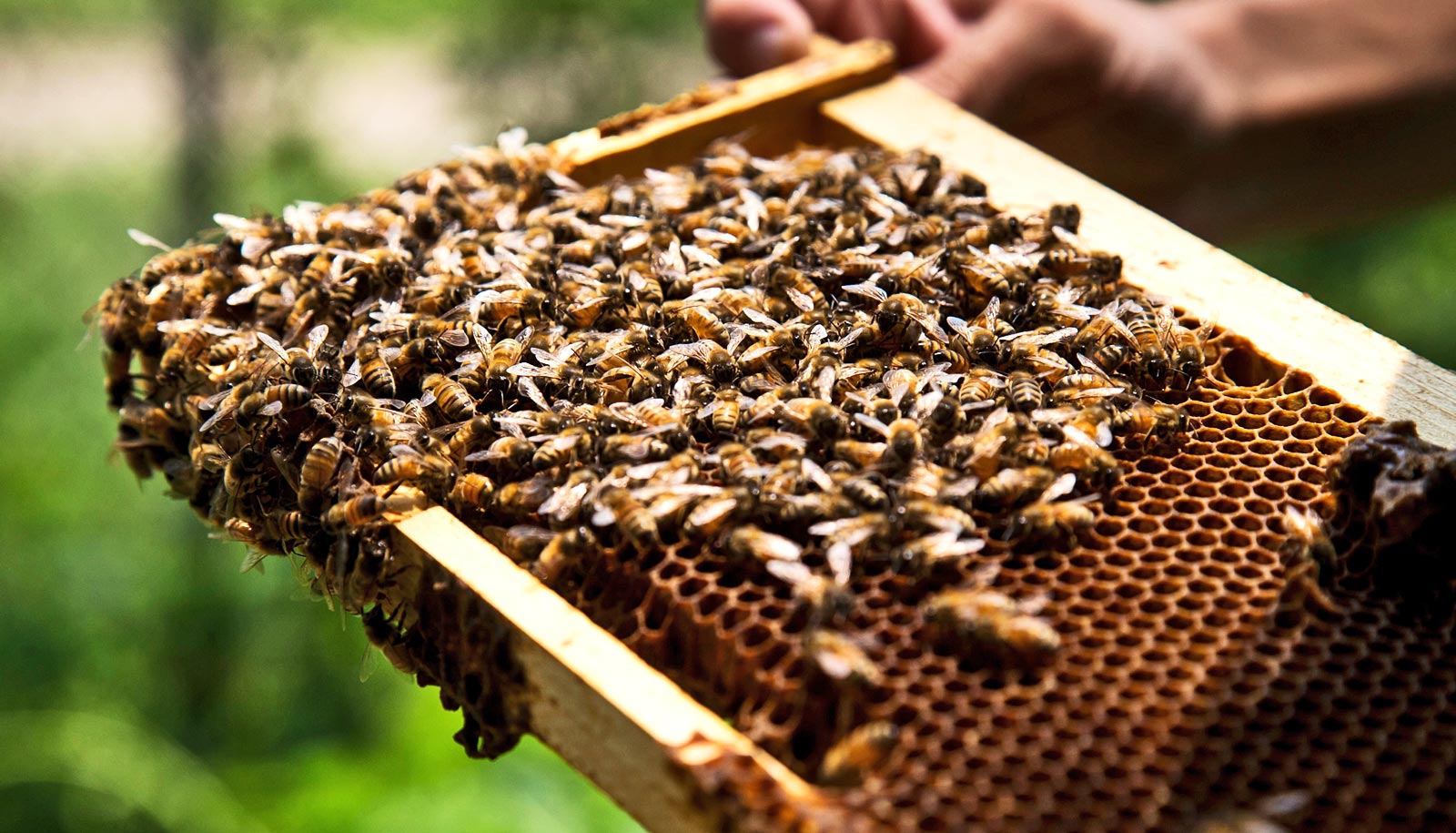 Researchers have identified a specific bacterial microbe that, when fed to honey bee larvae, can reduce the effects of nutritional stress on developing bees—one of the leading causes of honey bee decline.

Humans rely on honey bees for food security. Because they will pollinate almost anything, honey bees are extremely useful for agriculture. But over the past few decades, the honey bee population has experienced dramatic declines caused by the effects of multiple stressors, the most pervasive of which is limited nutrition.

“If you limit yourself to only eating one thing, that’s not healthy for you. Bees are the same way.”

Beekeepers in the United States reported losing 40.5% of their managed colonies between 2015 and 2016 alone, according to a national survey.

“The effects of poor nutrition are most damaging in the developing larvae of honey bees, who mature into workers unable to meet the needs of their colony,” says Irene Newton, a professor in the Indiana University biology department who led the study. “It is therefore essential that we better understand the nutritional landscape experienced by honey bee larvae.”

Newton says honey bees need to collect pollen and nectar from a variety of plants and flowers to help their colonies stay healthy throughout the year. But many bees in the US lack this floral diversity.

“We’ve changed the way we use our land in the US,” Newton says. “Now we have tons of monoculture crops like corn, which are wind pollinated and therefore no use to bees, covering acres and acres of land. Other crops that bees do pollinate are grown in monoculture as well, limiting the options for bees.

“If you limit yourself to only eating one thing, that’s not healthy for you. You have to have a broad diet that will help fulfill all of your nutritional needs. Bees are the same way.”

Honey bee larvae are fed by their sister bees. Their diet consists of foraged ingredients such as nectar and pollen, as well as royal jelly—a bee glandular secretion that is complex and nutrient rich. If larvae are destined to be queens, they will eat royal jelly their whole lives. If they are workers, their diets will shift to nectar and pollen after a few days.

In addition to being more nutritious than nectar and pollen, royal jelly has long been known to possess potent antimicrobial properties due to its acidity, viscosity, and the presence of antimicrobial peptides. This means that most microbes exposed to royal jelly die, Newton says.

According to their new study, Newton and her research team found that a specific microbe—Bombella apis—is the only larva-associated bacterium that’s actually able to thrive in royal jelly. They also found that B. apis makes royal jelly more nutritious by significantly increasing its amino acid content, which helps developing bees build resilience against nutritional stress.

“We have identified a nutritional symbiont of honey bees—a microbe that can help bolster the bees against nutrient scarcity and stress,” Newton says. “When we limited bee nutrition during development, we saw a drop in mass for the bees; bees were much smaller than their control counterparts.

“When B. apis was added to these same bees, although they had poor nutrition, they reached the same mass as control bees given full nutrition. The microbe was able to make up for the poor diet. This suggests that B. apis could be added to colonies as a probiotic to protect from nutritional stress.”

The results suggest that B. apis may have potential as a key supplement in future beekeepers’ efforts to counteract the negative influence of poor nutrition on honey bee health. B. apis can survive for over 24 hours in sugar water, so beekeepers who are already supplementing their colonies could potentially integrate a B. apis probiotic into their bees’ diets.

This research expands on over six years of previous studies by Newton and her colleagues, including findings that B. apis protects bees against fungal infections and is a significant part of the queen gut microbiome.

“We are excited to explore the other interactions that B. apis has in a colony, to better understand what it’s doing in different environments and the role it plays in association with honey bee queens,” Newton says.

Their findings appear in the International Society for Microbial Ecology Journal.