Ethical Today Ethical Today is your news, entertainment, lifestyle website.
Home Health Do You Know the Difference Between Salt and Sodium? 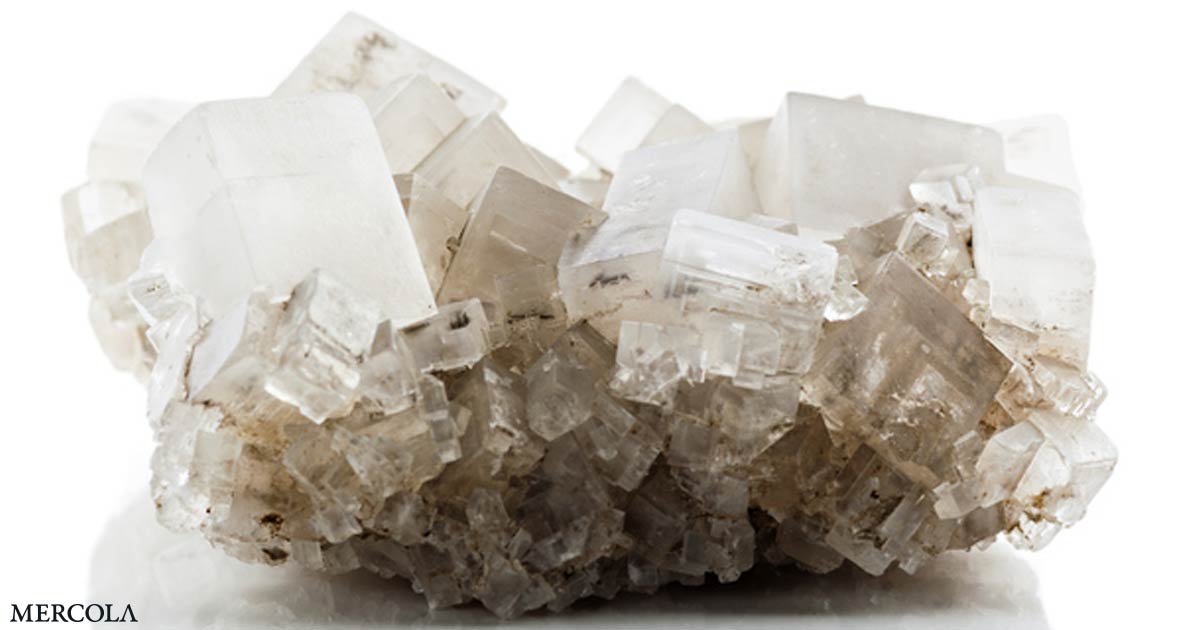 Did you know that salt and sodium are not the same things? The distinction is important since for decades doctors have recommended patients limit their salt intake.1 According to a historical report in Scientific American,2 it was 1904 when doctors in France first reported that patients with high blood pressure consumed a lot of salt.

In 1970, Lewis Dahl claimed he had “unequivocal” evidence that salt was linked to high blood pressure based on an animal study. When the amount of salt fed to the animals was scaled to size, it was equal to humans consuming 500 grams of sodium each day. As a comparison, the American Heart Association estimates the average American consumes 3.4 grams of sodium each day, which is far more than their recommended 1.5 grams or less.3

Dahl also claimed to find the same link in population trends.4 However, several years later researchers were unable to find the same associations when they compared intake within the populations. Although the new data could not confirm Dahl’s work, it did not stop the U.S. Senate Select Committee on Nutrition and Human Needs from recommending in 1977 that Americans cut their salt consumption by up to 85%.

Sodium is a mineral and an important electrolyte your body uses for fluid balance, muscle function and nerve impulses.5 It’s represented by “Na” on the Periodic Table of Elements.6 Another essential electrolyte7 is chloride (Cl), which your body also uses to maintain fluid balance and is essential for acid-base homeostasis and electrical neutrality.

Chloride levels are measured in serious metabolic disorders and researchers have long known, “Abnormalities in chloride channel expression and function in many organs can cause a range of disorders.”8

The combination of sodium and chloride makes up salt. The chemical formula is NaCl and it is also known as sodium chloride. Table salt is approximately 40% sodium and 60% chloride.9 As you can see, consuming 3,400 mg of salt is far different from 3,400 mg of sodium, so it’s important to know the difference.

Historically, salt has been widely and regularly used. As James DiNicolantonio PharmD., author of “The Salt Fix: Why the Experts Got It All Wrong — and How Eating More Might Save Your Life,” discussed in this short video, the incidence and prevalence of many chronic diseases began to rise when salt intake declined.

Salt was primarily used as a food preservative, which meant that in the past, people consumed far greater amounts than we do today. Salt was highly valued and production legally restricted, so it became a method of trade and currency. Special rations were given to Roman soldiers, known as “salarium argentum,” which was the forerunner to the English word salary.10

Salt played a key role in the Civil War11 and in the 1600s it was estimated that the average person in Sweden was eating 100 grams of salt each day.12 Despite a dramatic reduction in salt intake during the 1900s, blood pressure rose. The idea that salt intake correlates with blood pressure was popularized by the Dietary Approaches to Stop Hypertension (DASH) study13 that was published in 1999.

Lower salt intake was one of the dietary approaches employed in the study, but it wasn’t the only one. The DASH diet was also low on processed foods and sugars, and these may have a far greater impact on your blood pressure than salt.

Additionally, the idea that an excessive amount of sodium “over time causes the body to hold onto water longer to dilute the sodium,”14 is a simplistic explanation of a far more complex condition. As with all vitamins, minerals and chemicals in the body, each affects and is affected by several different systems.

Your sodium balance is at least impacted by magnesium, calcium and potassium, which in turn affects several aspects of your health, including blood pressure, bone density and heart and kidney health. In other words, each time you change the level of one, you impact the levels of others.

Evidence Does Not Support Low-Sodium Diets

Two studies16,17 published in 2011 showed similar results. The first was published in JAMA18 in which the researchers were interested in assessing urinary sodium excretion and its prediction on blood pressure and health outcomes.

They enrolled 3,681 participants who they classified without cardiovascular disease, 1,499 of whom had high blood pressure. The participants were followed for a median 7.9 years, and the researchers found:19

“… systolic blood pressure, but not diastolic pressure, changes over time aligned with change in sodium excretion, but this association did not translate into a higher risk of hypertension or CVD complications. Lower sodium excretion was associated with higher CVD mortality.”

The second, published in the American Journal of Hypertension,20 was a meta-analysis of randomized controlled studies where the researchers followed the participants for at least 6 months and compared adults with no salt restriction against those who had dietary salt restrictions.

They identified seven qualifying studies, three of which followed participants with normal blood pressure and two with high blood pressure. As expected, they found in the combined 6,250 participants that salt reduction also reduced the amount of urinary salt excretion.

In this short video, DiNicolantonio discusses the five benefits of eating what he calls a “normal” amount of salt in your diet,22 as compared to most guidelines that recommend less than a teaspoon per day. As he points out, exercising for an hour a day can result in a loss of one-half teaspoon of salt in sweat. When this is combined with eating less than a half teaspoon of salt, a person could quickly become sodium deficient.

He recommends eating 1.5 teaspoons of salt per day, or approximately 3,500 milligrams of sodium. When you’re not getting enough sodium, or you have a deficiency, it can lead to problems with athletic performance, erectile dysfunction, sleep challenges, and the risk of heatstroke.

The second benefit is that with more normalized salt consumption, you have a lower risk of sugar cravings. He says, “It turns out that we have an activation in the reward center in our brain when we are salt deficient and unfortunately addictive substances like sugar can actually have a higher dopamine response if we’re not getting enough salt.”23

Sodium levels in your body can also help to reduce stress hormones, such as angiotensin II, renin, aldosterone, noradrenaline and adrenaline.24 These stress hormones increase arterial stiffness and can potentially lead to high blood pressure, diabetes and chronic kidney disease.25

Salt also helps balance calcium and magnesium. Since your body requires salt, it will pull it from the bone to maintain a normal blood level, while also pulling magnesium and calcium.26

Finally, DiNicolantonio says the fifth benefit is better exercise performance, especially when you consume salt about 90 minutes before exercising. He says that studies show this additional salt increases your ability to exercise 21 minutes longer with a heart rate approximately 10 beats per minute lower and at a lower body temperature.27

Sodium-Potassium Ratio Is Much More Important

Another mineral important to heart health is potassium. Researchers28 have found the risk of cardiovascular events decreased as potassium levels increased. In this large study, they analyzed the intake of sodium and potassium as it related to blood pressure in 369 communities and as it related to cardiovascular disease and mortality in 255 communities. Combined, there were 178,311 participants. They discovered:29

Those who consumed the most were also 12% less likely to die during the study than those who consumed the least.31 There is significant evidence that the potassium-to-sodium balance is key to normalizing your blood pressure and protecting your cardiovascular health.32 A better strategy to promote public health would be to focus on a high-quality diet rich in potassium rather than in lowering salt consumption.

The easiest way to negatively affect your ratio of potassium and sodium is to eat a diet of processed foods, which are notoriously low in potassium and high in sodium. The body also uses potassium to maintain proper pH levels, which also plays a role in regulating blood pressure. In fact, as indicated in one study33 of 102,216 adults from 18 countries, potassium deficiency may be more responsible for hypertension than excess sodium.

Another study35 published in 2011 was one of the first and largest to evaluate the relationship between salt, potassium and heart disease deaths. They found those who were at greater risk of heart disease deaths had a combination of too much sodium and too little potassium.

Consider Your Sodium and Potassium Sources

When you’re choosing foods to increase your potassium levels, one of the first foods many consider is bananas. One medium banana contains 451 mg of potassium.36 However, bananas are far from being your only source of potassium and contain 6 grams of total fructose.37 So, consider foods high in potassium without the added fructose, such as beet greens, spinach, leafy greens, sweet potato, mushrooms and acorn squash.38

From my perspective, the clear answer is to avoid processed salt and use natural salt in moderation. I believe it is hard for a healthy person to overdo natural salt, as it is a nutritional goldmine — provided you pay attention to your sodium-to-potassium ratio and your source of sodium.

The beauty of using Himalayan salt is that, in addition to being naturally lower in sodium, it’s much higher in potassium compared to other salts — including other natural salt like sea salt or Celtic salt. Additionally, Himalayan salt is far lower in toxic pollutants, such as plastic microparticles, commonly found in processed salt and sea salt.

Remember, aside from the basic differences in nutritional content, it’s processing that makes table salt (and the salt used in processed foods) detrimental to your health. What your body needs is natural, unprocessed salt, without added chemicals or pollutants.

Fiber is another important addition to your nutritional plan to reduce your risk of cardiovascular disease. There are two main types of dietary fiber: soluble and insoluble. Ideally, you need both on a regular basis.

• Soluble fiber — Soluble fiber, found in cucumbers, blueberries, beans and nuts, dissolves into a gel-like texture, helping to slow down your digestion. This helps you to feel full longer, which can help with weight control.

Likewise, it slows down the rate at which other nutrients are digested, including carbs, so they’re not as likely to raise your blood sugar. Some foods rich in soluble fiber also help feed good bacteria in your gut.

• Insoluble fiber — Insoluble fiber, found in foods like dark green leafy vegetables, green beans, celery and carrots, does not dissolve and stays basically intact as it moves through your colon. By adding bulk to your stool, it helps food to move through your digestive tract more quickly for healthy elimination.

Insoluble fiber is also sometimes called roughage, a term describing one of its functions. As it moves through your colon, it helps move along food particles tending to adhere to the sides. Food remaining stuck to your colon may cause bloating, pain and constipation, as well as other problems.