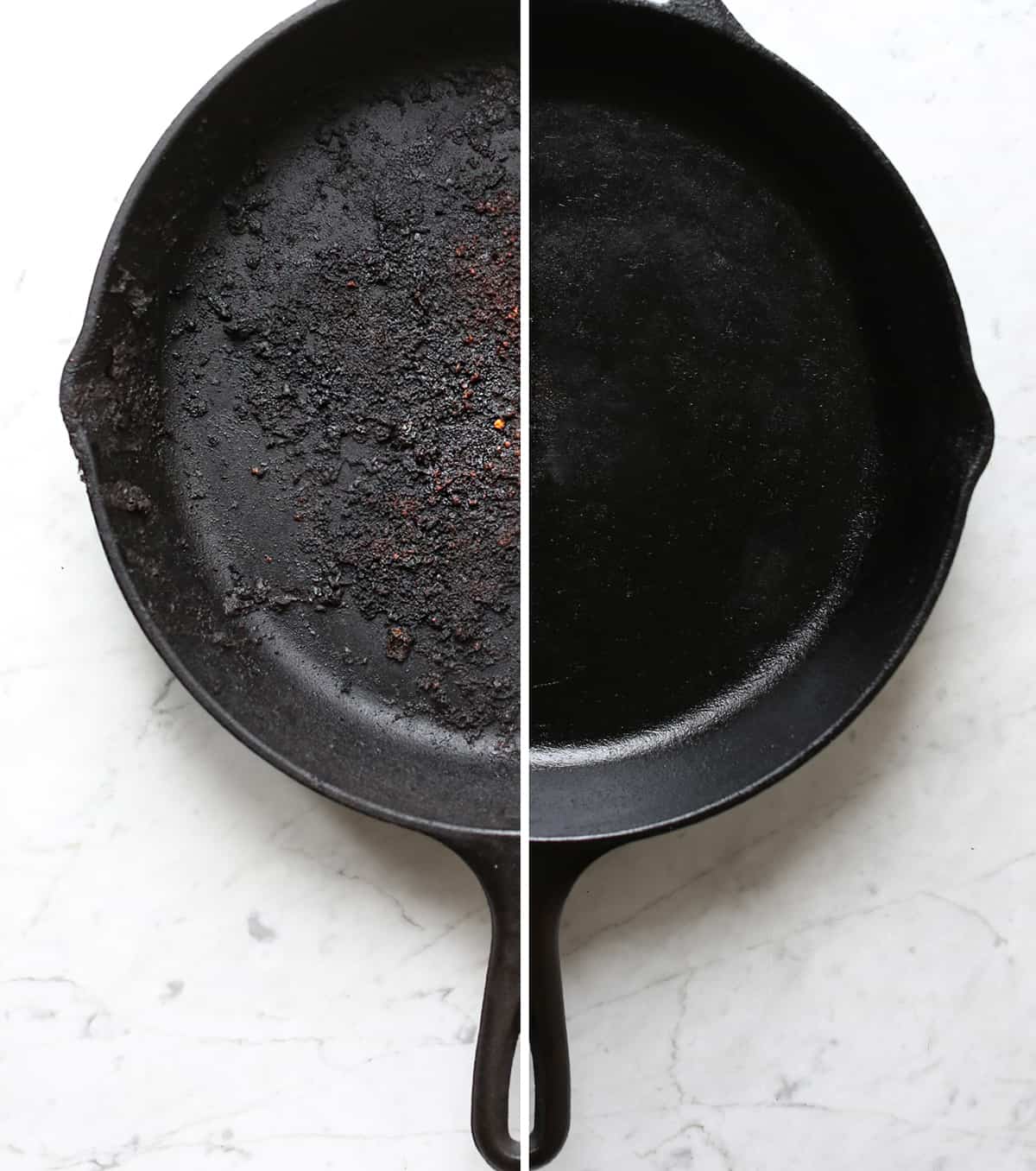 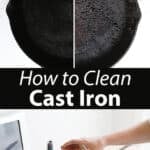 I hear a lot of people are hesitant to use cast iron when cooking because they don’t know how to clean it, or they are afraid or ruining it. Hopefully, I can shed some light on these concerns as it’s actually REALLY easy to clean cast iron.

And it’s pretty indestructible, so it will likely last much longer than any non-stick pan with just a few simple tips.

Do you have to clean cast iron after every use?

No. This is a somewhat personal preference, but we only clean our cast iron skillet a couple times a month at the most. And we cook with it at least a few times every week.

The little bits of cooked food that build up on the pan between, so long as it’s not excessive, actually adds to the flavor and texture of meals we make.

We mostly make stir fry in our pan, things like shrimp, chicken, vegetables, rice, and savory seasoning and sauces that you might expect in a stir fry.

If we cook something with a very different flavor profile, we would likely go ahead and give our skillet a good wash before and/or after.

How to clean cast iron skillet:

Scrub away any thick residue. This is likely cooked food bits from previous meals, but it could also be dried sauces, gravies, etc. All you need is hot water and a scrubbing brush (no soap) to do this.

If you find it difficult to remove, you can leave water in the pan overnight to soften the debris. This can slightly rust the pan, but just scrub that away with the residue and it’s fine.

Another thing you can try for super stubborn bits is to add boiling water in the pan to loosen things.

Rinse the skillet well, and then pat dry with a clean kitchen towel or paper towel. You don’t want to leave water droplets as it can rust the pan (which doesn’t ruin it, but you will have to clean it again).

I have one kitchen towel I use for this task as it gets pretty dingy, even after washing the towel. So, don’t use any fancy kitchen towels you like to use for decor or serving. This task is for your can-get-stained-forever kitchen towels only.

Rub the cast iron skillet with oil once it’s dry. I typically use olive oil as it’s what we usually cook with, but any food-safe cooking oil is fine to use. This will keep your cast iron skillet looking like new.

Again, a can-get-messy kitchen towel or paper towel is best here, too.

Can you ruin a cast iron pan?

Yes, but only if you break them or severely scratch them. Otherwise, it’s just a matter of cleaning (and if needed, re-seasoning them) if they have been washed in soap.

So, as long as you don’t break the pan (which is hard to do), it will last you for many years with heavy use. Cast iron skillets are a very safe and economical pan for cooking. We love ours!