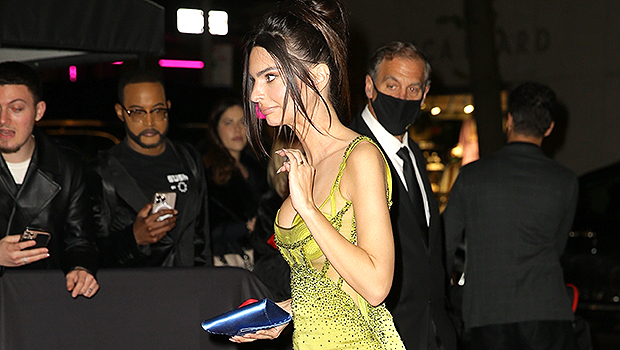 Zendaya brought Disney’s Cinderella to life at the 2019 Met Gala. So, with the Euphoria star skipping this year’s event, it was up to Emily Ratajkowski to bring the fairy tale vibes, albeit inadvertently. Emily, 30, had switched out of the Versace look she wore at the Met Gala for a chartreuse mini dress. She complimented the look with some chunky, hot pink heels – but they may have been a bit too chonky for the model. As she arrived at The Mark Hotel for an after-party, she lost one of the pumps as she hit the red carpet.

The heel just went flying as Emily accidentally kicked it off. Thankfully, the shoe didn’t go far, and an unnamed man helped her out. At that moment, this man in front of the hotel was Emily’s prince, and he found that the shoe fit her perfectly. Together, they had a “Happily Ever After”….for about ten seconds. Then, Emily made her way into the event.

Emily hit up a couple of afterparties. She also visited the one Cardi B hosted at The Top of The Standard. “What’s up, everybody!! Welcome to the official Met Gala after-party, hosted by me and Playboy,” Cardi said, per Vogue. “Whatever you got to do, I want everybody to turn it up. I want everybody dancing! What happens at this party is going to stay in this party.” The bash included appearances from Billie Eilish, Kieran Culkin, and Donatella Versace – who celebrated her birthday.

The green mini-dress Emily wore offered just as much coverage as her actual Met Gala outfit. Emily attended the “gilded glamour” gala in a 1992 Versace dress that included a beaded bodice that folded into a high-low skirt, according to Harper’s Bazaar. The dress drew comparisons to Mardi Gra on Twitter due to the number of beads and amount of skin EmRata showed. However, the dress is a part of the House of Versace. Model Yasmeen Ghauri last wore it on a 1992 Versace runway. “I feel very lucky to be wearing this look,” Ratajkowski said about the dress and helping the garment make its Met Gala debut.

In 2021, EmRata appeared at the Met Gala in a red Vera Wang gown, one inspired by the designer’s bridal collection.

Met Gala Venue: Where The Event Is Held & All About The Costume Institute