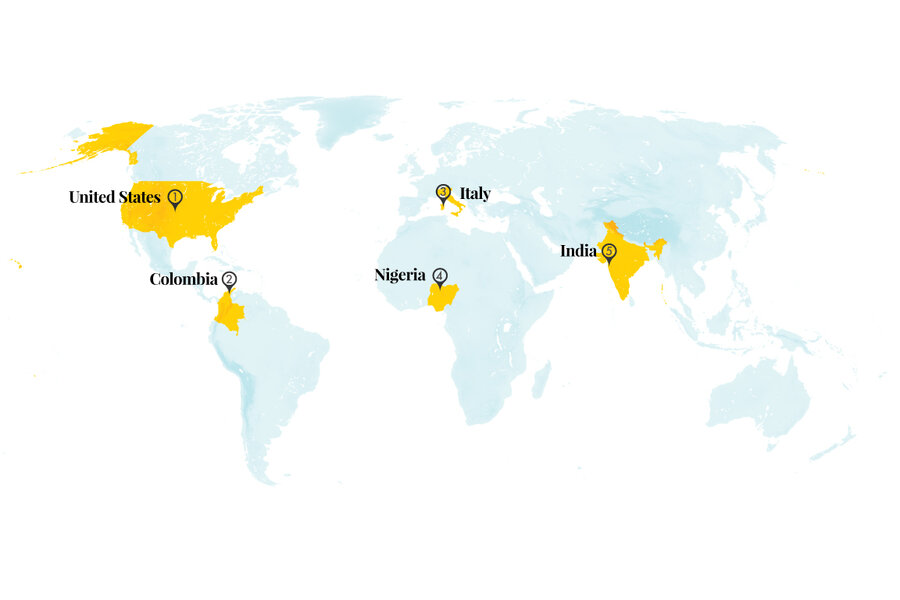 Along with communitywide improvements around the world, individuals in the U.S. are growing their own food at home, creating positive environmental change household by household.

“Climate victory gardens” are feeding Americans while contributing to a healthier environment. During World War I and II, some 20 million families across the United States planted victory gardens, supplying 40% of the country’s produce at their height. During the pandemic, backyard gardening has again grown in popularity. Green America, a nonprofit that helps people grow their own food as a way to fight climate change, has seen a jump in gardens registered with the organization from 8,670 in 2021 to 14,655 in just the first two months of this year.

In our progress roundup, communities around the globe pursued goals to improve the lives of their own residents. But the positive impact of their self-improvement plans often reaches beyond.

What makes a garden a climate victory garden, according to the organization, is its regenerative impact, avoiding pesticides and harmful chemicals and feeding both the gardener and pollinators. That type of farm, no matter how small, can sequester more than 25 tons of carbon per acre, according to methodology adapted from the nonprofit Project Drawdown and the Environmental Protection Agency. Although many gardeners have not formally registered, Green America estimates the gardens it’s aware of have offset the emissions of the equivalent of 39 million miles driven.
Treehugger

A volunteer weeds the Pounder Vegetable Garden, a demonstration space to study the impacts of a changing climate, at Cornell University in Ithaca, New York.

A public library in Colombia is keeping Indigenous stories and traditions alive. The mountainside town of Atánquez in the Kankuamo Indigenous reserve had never had a library, which meant there was nowhere to put a box of books delivered by the National Network of Public Libraries in 2013. So residents spruced up an abandoned building with tables, chairs, and shelves, creating a makeshift library. But they didn’t stop at books.

Today, children in the community regularly take part in library programming, from outings in which they try their hand at drawing ancient petroglyphs to gatherings with elders who share traditional music, recipes, and history. During the pandemic, the library gave kids recorders to document the stories of their family members and distributed seeds and groceries to those in need.
For decades, many Indigenous people in the area had distanced themselves from their culture to assimilate to mainstream Colombian society. This project is helping change that. “Little by little our people are falling in love and valuing what they are as indigenous peoples,” said Ener Crispin Cáceres, a Kankuamo elder. In 2017, the library won Colombia’s national library award and has earned international recognition.
The Guardian

An Italian town with a violent past made a new name for itself by promoting cultural tourism. Mamoiada sits in the heart of the island of Sardinia in a region the Romans once called Barbària. In the late 1990s and early 2000s, Mamoiada became infamous for a series of killings linked to a family feud. But instead of giving up on the troubled town, where economic opportunities were scarce, residents and local administrators harnessed the region’s cultural strengths.

For two years, a local nonprofit worked without pay to revamp the inventory in the town’s small museum, expanding from traditional local masks known as viseras to artifacts from around the region, and creating a cultural center. Then, the group partnered with artisans, wine producers, and tour organizers to show visitors how local products are made. In 2011 and 2014, two museums opened to showcase the town’s history and archaeology. Slowly but surely, Mamoiada placed itself on the tourist map, making it possible for new restaurants and inns to open and benefiting neighboring towns as well.
News48

Miners search fine dust for gold in Anka, Zamfara, Nigeria, in 2016. A safety program in the region has trained workers to guard against lead exposure.

A mining region in northwest Nigeria effectively handled a lead pollution problem. When gold boomed during the financial crisis, small-scale and unregulated mining became an important source of income for rural residents of the mineral-rich but impoverished state of Zamfara. But the gold was processed with few safety precautions, and lead pollution created significant health risks for community members. The crisis came to a head in 2010, when 400 children died from lead contamination in a period of six months, with several hundred deaths in the following years.

In response, government officials teamed up with three international organizations to improve mining conditions. Over 5,000 miners and local workers have been trained to prevent lead exposure, and new processing sites equipped with showers a few miles from residential areas help workers avoid bringing mineral deposits into the home at the end of the day. The efforts have been complicated by conflict in the region, and poverty still limits opportunities for locals beyond mining, but the changes have nonetheless strengthened safety standards for miners and their families. There have been no child deaths linked to lead poisoning since October 2021.
The Guardian

Mumbai became the first city in South Asia to outline a road map to net-zero emissions. The financial megalopolis, home to 19 million people, is planning to eliminate or offset all carbon emissions by 2050, two decades ahead of India’s national goal. Without intervention, climate change could cost the city $920 million by midcentury, with rising tides that would flood informal settlements and fishing villages along the coast.

Officials, residents, scientists, and companies all contributed to the Mumbai Climate Action Plan, which aims to cut emissions by 30% by 2030 and 44% by 2040, from a base level of 23.42 million metric tons of carbon dioxide in 2019. In the short term, Mumbai will electrify its public transportation and help low-income households install energy-efficient equipment. A complete switch to renewable energy is a more daunting endeavor, with detailed proposals still to come. But as India’s wealthiest city, Mumbai may be better equipped than other parts of the country to make the transition, thanks to access to investors. For Aaditya Thackeray, minister of the environment of the state of Maharashtra where Mumbai is located, the reasoning behind the new plan is simple: “We don’t have the luxury of time.”
Bloomberg