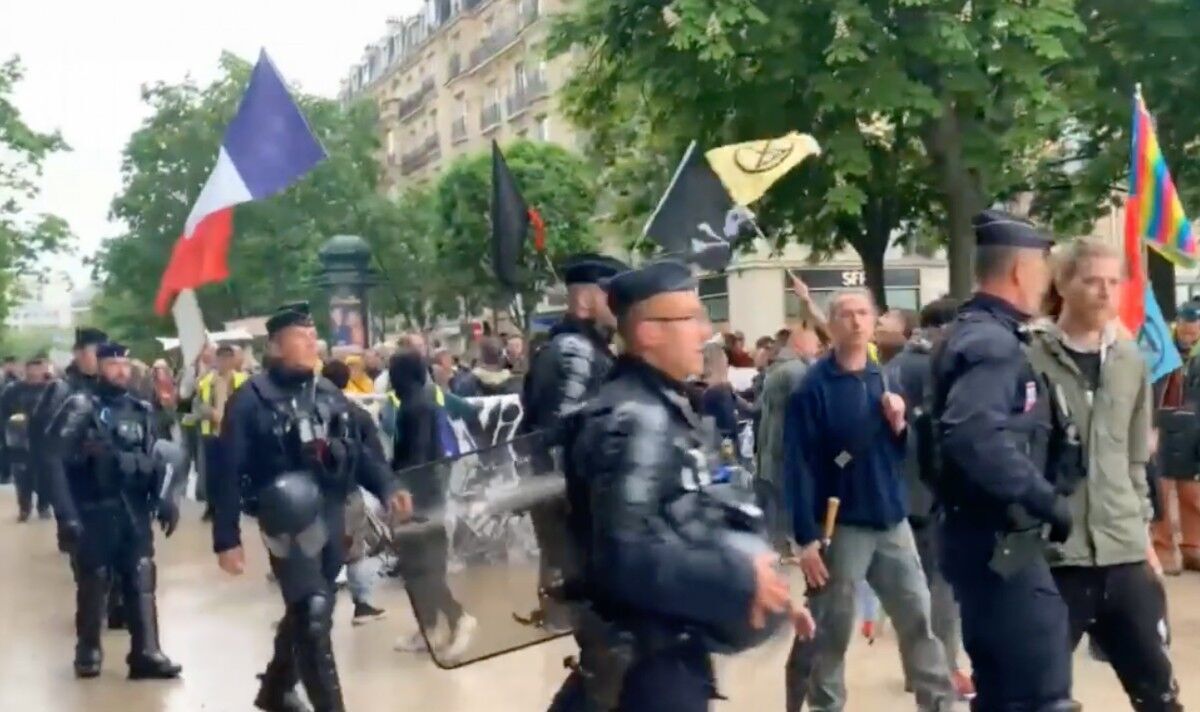 Protestors flocked to Paris ahead of Sunday’s Presidential election showdown between President Emmanuel Macron and his right-wing opponent Marine Le Pen. Riot police have been deployed to maintain order in France‘s capital city as demonstrators chant and brandish banners expressing their discontent with President Macron’s record in power.

Large crowds have made their way through the centre of Paris but the protests so far have remained peaceful.

Despite the non-violent nature of the demonstrations, a large number of police officers have been deployed to the streets with batons and riots shields.

This has been taken as a sign that President Macron is sensitive to “shut down” any potential clashes before they flare up.

A French journalist on the scene told Express.co.uk: “This is quite normal in France now. Every protest, however peaceful, becomes operation contain for Macron.

“They always end with NAS police and a lot more police officers than protesters.

“After years of clashes in France he just wants to shut it down before it even starts.

The French will decide on Sunday whether to re-elect centrist President Macron o in favour of the far-right populist Marine Le Pen.

Le Pen has insisted she has no “secret agenda” for France – a founding member of the EU – to leave the 27-nation bloc, its single currency or its passport-free Schengen zone.

Opponents believe her policies would at best create new tensions within the bloc – whose unity has been tested in recent years by a migration crisis, Britain’s departure and the Covid 19 pandemic – and at worst lead to a “Frexit”.

Le Pen has said she would cut French contributions to the EU budget, renegotiate the Schengen agreement and re-introduce checks on goods entering the country from other EU states.

She would seek to re-establish the primacy of French law over EU law – the foundational basis of European integration – and wants the bloc to become a loose association of cooperating sovereign countries.

“It amounts to a complete hollowing-out of what the EU has been trying to achieve all these years,” said one senior diplomat. “But it’s not presented that way.”

Le Pen also wants to pull France out of the transatlantic military alliance NATO’s integrated command, in a challenge to the West’s post-Cold War security architecture.

Opponents accuse her of being too close to Moscow. Her party received a bank loan from a Russian bank in 2014 and she was hosted by Russian President Vladimir Putin at the Kremlin shortly before the 2017 presidential election.

Macron accused Le Pen of being on Putin’s payroll, telling her: “You talk about your banker when you talk about Russia.”