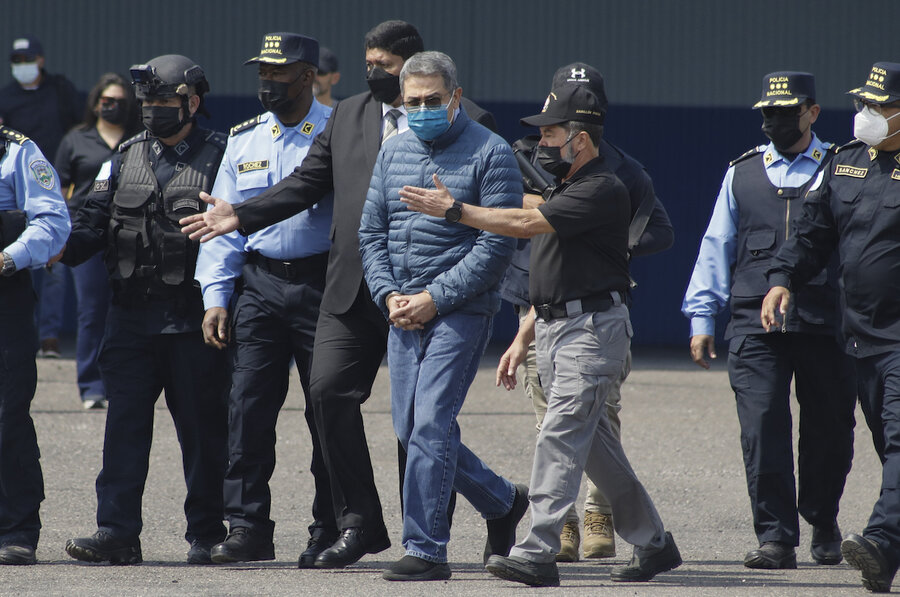 Honduras extradited former President Juan Orlando Hernández to the United States on Thursday to face drug trafficking and weapons charges in a dramatic reversal for a leader once touted by U.S. authorities as a key ally in the war on the drugs.

Just three months after leaving office, a handcuffed Mr. Hernández boarded an airplane with agents from the U.S. Drug Enforcement Administration bound for the United States, where he faces charges in the Southern District of New York.

U.S. Attorney General Merrick Garland said Mr. Hernández “abused his position as President of Honduras from 2014 through 2022 to operate the country as a narco-state.”

In court documents, U.S. prosecutors alleged Mr. Hernández was involved in a “corrupt and violent drug-trafficking conspiracy” that moved more than 550 tons of cocaine to the United States. He was charged with participating in a drug trafficking conspiracy, possession of machine guns and destructive devices, and conspiracy to possess machine guns and destructive devices.

Prosecutors charge that Mr. Hernández received millions of dollars from drug cartels, including from notorious Mexican drug lord Joaquín “El Chapo” Guzmán. They allege he used the money to finance his political campaigns and engaged in voter fraud in the 2013 and 2017 Honduran presidential elections.

“In return, drug traffickers in Honduras were allowed to operate with virtual impunity,” Mr. Garland said. “We allege that Hernández corrupted legitimate public institutions in the country – including parts of the national police, military, and national Congress.”

Mr. Hernández was arrested at his home in Tegucigalpa in February at the request of U.S. authorities. He was shackled and paraded in front of journalists, a sight many Hondurans never imagined seeing.

Honduras’ Supreme Court rejected his appeal of a judge’s decision in favor of extradition.

“Drug trafficking fuels violent crime and addiction; it devastates families, and it ravages communities,” Mr. Garland said. “The Justice Department is committed to disrupting the entire ecosystem of drug trafficking networks that harm the American people, no matter how far or how high we must go.”

Mr. Hernández has repeatedly denied any wrongdoing. In a video message released Thursday, he said, “I am innocent; I have been and I am being unjustly subjected to prosecution.”

He has said he is the victim of drug traffickers he extradited who are now lying to seek revenge.

Henry Osorto Canales, a retired National Police commissioner who is now an analyst, said that while the extradition was an embarrassment for Honduras, it was also a historic day.

“This is a start because it has begun with the largest political piece that the country had and logically the rest of the pieces are going to fall, at least those closest [to Hernández],” Mr. Osorto said.

U.S. prosecutors have spent years building cases from low-level drug traffickers and local politicians to organized crime bosses who used their political connections and ties to drug trafficking cartels in Colombia and Mexico to move tons of cocaine to the U.S. Many of them testified about making payments to Mr. Hernández or one of his brothers, also a politician.

Mr. Hernández’s brother Tony Hernández, a former congressman, was sentenced to life in prison in the same U.S. court on essentially the same charges.

Juan Orlando Hernández took office in January 2014 and held the presidency until this January, when Xiomara Castro was sworn in as his replacement. Mr. Castro campaigned on rooting out Honduras’ corruption and Mr. Hernández was seen as the largest target.

On Wednesday, Honduras’ Supreme Court denied an appeal from the former chief of the National Police, Juan Carlos Bonilla Valladares, better known as “El Tigre” or “The Tiger.” He was arrested after Mr. Hernández at the request of U.S. prosecutors on similar charges and is expected to be extradited in the coming weeks.

U.S. prosecutors allege Mr. Bonilla assisted the movement of tons of cocaine through Honduras, working with Mr. Hernández and his brother Tony Hernández, both co-conspirators in the case in the Southern District of New York.

Mr. Hernández’s transport via helicopter under heavy guard from the police base where he was held to the airport Thursday was covered live by local television outlets.

Some Hondurans stood outside the airport’s perimeter fence to catch a glimpse of the former president boarding the plane with U.S. authorities. When Mr. Hernández’s plane took off some were seen jumping in celebration.

Thousands of their countrymen emigrated from the country during Mr. Hernández’s administration, often shouting “Get out JOH!” using his initials as they walked north. They frequently complained of a lack of job opportunities and gang violence.

This story was reported by The Associated Press. Michael Balsamo reported from Washington. AP writer Christopher Sherman in Mexico City contributed to this report.