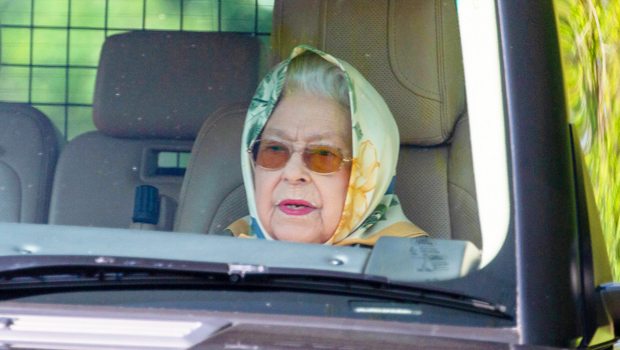 Queen Elizabeth can rock bright shades with the best of them! The monarch, who celebrated her 96th birthday on April 21, was seen enjoying a leisurely drive from the passenger’s seat of a Range Rover as photographers looked on. In the photos, she rocked a vibrant shade of bright pink lipstick perfect for a private birthday celebration, a pair of sunglasses, and elegant, simple earrings. She traveled from Windsor Castle to the family gathering spot on April 20, according to People, where the royal family typically holds their Christmas celebrations.

The Queen’s Royal Family Twitter and Instagram pages also featured an adorable throwback pic of the monarch at just 2 years old, which pointed out the historic nature of the occasion. “Happy Birthday Your Majesty!” the April 21 posts read. “Today as The Queen turns 96, we’re sharing this photograph of the young Princess Elizabeth aged 2. Then, in 1928, it was never expected she would be Queen, and this year Her Majesty is celebrating her #PlatinumJubilee – a first in British history.”

Ahead of her birthday, a regal portrait of the queen at Windsor Castle with her two white fell ponies was released and posted to the Royal Family’s social media accounts, as well. “Ahead of The Queen’s 96th Birthday tomorrow, @royalwindsorhorseshow have released a new photograph of Her Majesty with two of her fell ponies, Bybeck Katie and Bybeck Nightingale,” the post reads. “Taken last month in the grounds of Windsor Castle, the photo is the fourth in a series of photos released by the Royal Windsor Horse Show, following images that celebrated the Golden Jubilee, the Platinum Jubilee and Her Majesty’s 90th Birthday. First staged in 1943, The Queen has attended every single Royal Windsor Horse Show.” The photo was provided by Henry Dallal Photography.

The birthday stay at Sandringham is especially poignant, given that Queen Elizabeth recently marked the one-year anniversary of the death of her husband, Prince Philip. He died of natural causes at age 99 on April 9, 2021, and the monarch has shared many memories with her late husband on the grounds at Sandringham. She observed the anniversary of his death on her official Twitter account, saying simply “Remembering His Royal Highness The Duke of Edinburgh on the first anniversary of his death.” She included a Simon Armitage poem entitled “The Patriarchs – An Elegy,” along with a touching video montage in honor of Prince Philip.