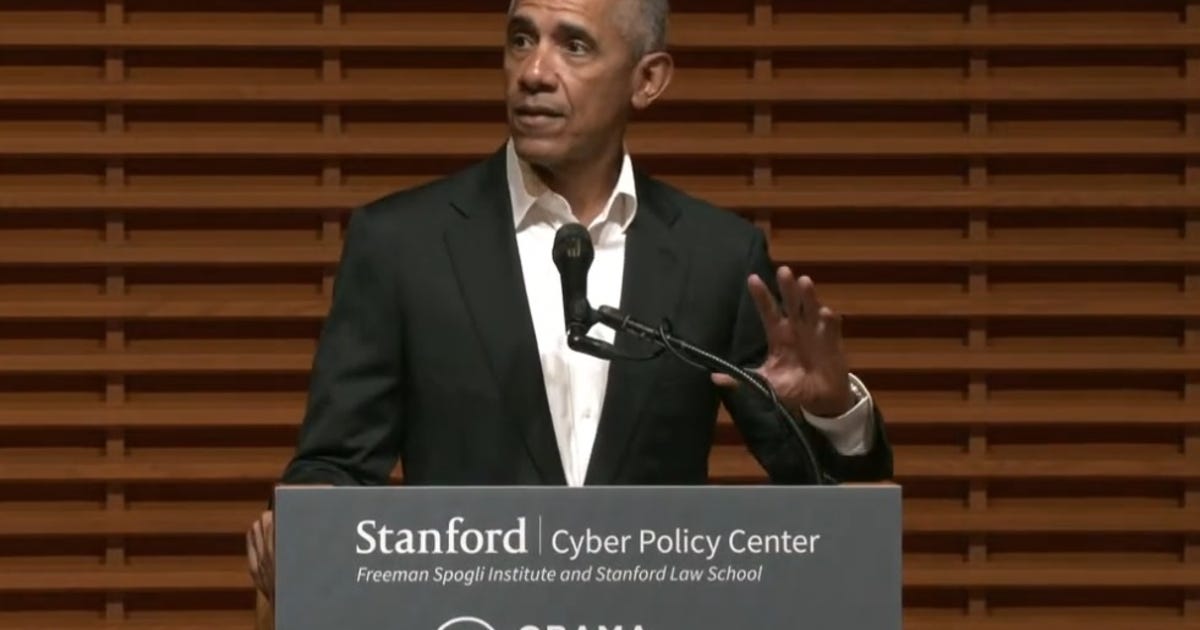 Former President Barack Obama on Thursday warned that the spread of misinformation on social media represents a threat to democracy and urged regulation of the tech platforms.

“The very design of these platforms seems to be tilting us in the wrong direction,” Obama said during a speech at a Stanford Cyber Policy Center event, adding that social media is “turbocharging some of humanity’s worst impulses.”

Obama pointed to the real-world impacts of the spread of misinformation, including false information about COVID-19 and its vaccines.

“The fact that scientists developed safe, effective vaccines in record time is an unbelievable achievement,” Obama said during the hourlong speech. “Yet despite the fact that we know essentially clinically tested the vaccine on billions of people worldwide, around one in five Americans is still willing to put themselves at risk and put their families at risk, rather than get vaccinated.

“People are dying because of misinformation.”

Obama’s comments come as lawmakers on both sides of the aisle focus on legislation to rein in the power and influence of Big Tech, targeting companies accused of harming consumers by allegedly choking competition from smaller players, exploiting personal data for profit, and controlling what is shared and consumed online.

Calling disinformation “a threat to our democracy,” Obama highlighted unfounded conspiracy theories about election fraud that fueled the deadly Jan. 6 Capitol Hill riot and misleading videos from Russia about its war with Ukraine.

“People like [Russian President Vladimir] Putin, and Steve Bannon for that matter, understand it’s not necessary for people to believe this information in order to weaken democratic institutions. You just have to flood a country’s public square with enough raw sewage. You just have to raise enough questions, spread enough dirt, plant enough conspiracy theorizing, that citizens no longer know what to believe,” Obama said.

“Once they lose trust in their leaders, mainstream media, in political institutions, in each other, the possibility of truth — the game’s won,” he added.

Obama called for tech companies to be more transparent how their algorithms work to spread content to users.

“These companies are still way too guarded about how exactly their standards operate or how their engagement ranking systems influence what goes viral, and what doesn’t,” he said.

But he said the tech industry needs to take some responsibility in enacting change.

“These companies need to have some other North Star other than just making money and increasing market share. Fix the problem that in part they helped create, but also to stand for something bigger,” he said.

He also appealed to the employees of tech companies to press for change.

“You have the power to move things in the right direction. You can advocate for change, you can be part of this redesign — and if not, you can vote with your feet and go and work with companies that are trying to do the right thing.”


Get the CNET Daily News newsletter

Catch up on the biggest news stories in minutes. Delivered on weekdays.