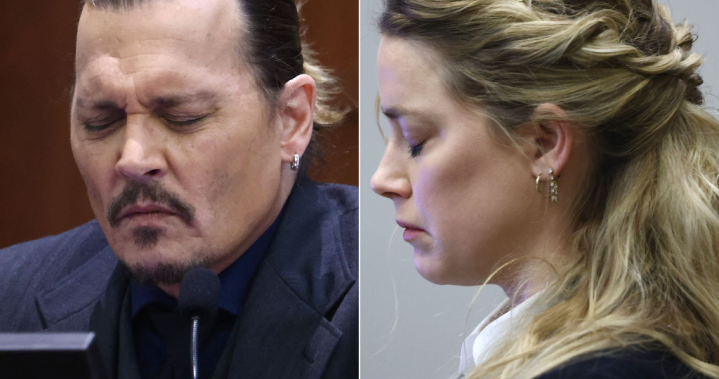 NOTE: This story contains details and language some may find disturbing. Please read at your own discretion.

Johnny Depp‘s cross-examination continued Thursday as he took the stand for a third day to testify against ex-wife Amber Heard, whom he has accused of ruining his reputation and career with false accusations of domestic violence.

During a 2020 U.K. libel case, which Depp lost, several private and disturbing text messages with Depp were read in court.

These texts from 2014 were again read in court Thursday, including messages from Depp, who texted Bettany, “Let’s drown [Heard] before we burn her.”

“I will f–k her burnt corpse afterward to make sure she is dead.”

Multiple photos of drugs allegedly belonging to Depp were submitted as evidence to the jury, including a photo of several lines of cocaine alongside whiskey, and a small box with a skull and crossbones and the words “property of JD.” A photo of four large bags of marijuana was also shown.

Several text messages from Depp discussing drugs and drug use were read aloud, including references to cocaine, marijuana and various pills.

Jurors also listened audio of Heard telling Depp about his behaviour while allegedly under the influence of drugs, which included vomiting in his sleep.

A photo was shown of Depp asleep on the couch in his Boston residence with melted ice cream in his lap. Depp explained to Rottenborn he had worked a long day and had taken opioids, and that’s why he’d fallen asleep.

2:43
Defamation trial: Depp testifies about photo of him sleeping with melted ice cream on his lap

Defamation trial: Depp testifies about photo of him sleeping with melted ice cream on his lap

Tensions rose in the courtroom as Rottenborn continued, casting doubt on whether the actor had been sober from alcohol for 18 months, at one point, as Depp had claimed earlier in the week.

After lunch, Rottenborn continued to grill Depp. Heard’s lawyer began by questioning the actor about the couple’s time in Australia during 2015, which is when Depp suffered an injury that left him with a severed finger.

During his testimony, Depp admitted to dipping his bleeding finger in paint to write messages in paint/blood mixture on the walls and furniture in the house where the couple were staying.

Several photos of the “reminders,” as Depp called them, were shown in court, including scrawled, barely legible writing on a mirror and lampshade.

In both an audio clip and several text messages, Depp referred to that now-infamous day as “the day I chopped off my finger”, the court heard.

During his previous testimony, Depp claimed the digit was severed after Heard threw a vodka bottle at him and it hit his hand, shattering the glass.

Perhaps the most disturbing details to be revealed, however, came in the late afternoon when Rottenborn played for the court a video of a fight between the couple, that Heard had attempted to secretly record.

In the video, Depp can be seen in the kitchen of his Hollywood home, violently slamming cupboards and kicking at the cabinets. He stumbles in and out of frame several times, and the sounds of breaking glass can be heard two times off-screen.

Heard asks him several times what he’s upset about, while Depp, visibly intoxicated, drains a large amount of wine into a mason jar wine glass.

When he realizes Heard is recording the argument, he slaps the phone out of her hand.

The court was also shown texts from Depp to his friend Issac Baruch, in which he referred to Heard as a “slippery whore” and told Baruch “hopefully that c–t’s rotting corpse is decomposing in the f–king trunk of a Honda Civic!!”

Thursday’s cross-examination closed after the jury was presented a five-minute audio clip of one of Depp and Heard’s last meetings in 2016.

In the recording, Depp can be heard trying to convince Heard repeatedly to cut him with a knife.

“Do you want to cut me somewhere?” he asks.

“Please don’t hurt yourself,” she begs.

Several times throughout the clip, Heard asks Depp not to cut himself and tells him she will not cut him, either. She also repeatedly asks him not to hurt himself.

On Wednesday, Depp testified about the details of his relationship with Heard, claiming she used his personal weaknesses as “ammunition.”

“It seemed like pure hatred for me,” he said, claiming Heard would name-call and escalate misunderstandings into “full-scale arguments.”

The legal battle of the two stars has captured the attention of spectators around the globe, with both Heard, 35, and Depp, 58, claiming to be victims of violence. The initial court case began when Depp filed a $50-million defamation lawsuit over a Washington Post op-ed penned by Heard in late 2018 about domestic abuse.

Johnny Depp takes stand, testifies against Amber Heard: ‘My goal is the truth’

Heard did not mention Depp by name in the article, but the actor alleges his reputation and career were still “devastated” as a result.

Depp’s lawyers have already called on several witnesses, including friends, the couple’s therapist, and the doctor and nurse who claim they treated the Pirates of the Caribbean actor for substance abuse issues.

In opening statements delivered by the former spouses’ legal teams last week, Depp’s lawyers claim Heard is “choosing to lie about him for her own personal benefit.”

Heard’s lawyers argued the opposite, claiming freedom of speech allowed the Aquaman actor to pen the Washington Post op-ed.