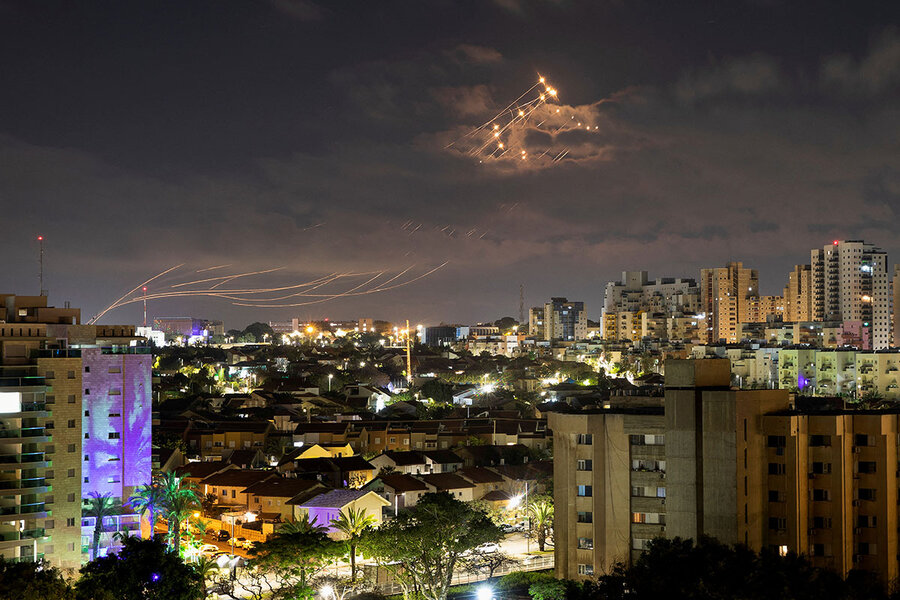 Israel also reached out to the United Arab Emirates and Egypt, which, with Jordan, share an interest in avoiding a repeat of the chain of events nearly a year ago that saw heavy-handed Israeli police tactics in Jerusalem help fan mass Palestinian protests and trigger a Gaza war.

Security-minded Israel and its Arab partners, eager to avoid violence in Jerusalem during Ramadan and Passover, nevertheless neglected to address a Palestinian hunger for a political solution and dignity.

So why, then, is violence erupting once again in the holy city? Analysts say the pursuit of calm and diplomacy alone cannot prevent conflict in the absence of a political settlement rooted in dignity.

“There were lessons learned from 2021 to handle the situation better; Israeli police have changed their tactics and have tried to keep things calm the first two weeks of Ramadan,” notes Mairav Zonszein at the International Crisis Group in Tel Aviv.

“But at some point, even if there are areas of improvement, things will always bubble up if there is no progress on the political side to the conflict.”

The eruption of violence in Jerusalem and rocket-fire from Gaza this week is challenging both an Israeli government committed to “shrinking the conflict” with Palestinians, and its Arab neighbors desperate to maintain calm in the occupied West Bank and in Gaza. And it is threatening a wider war all have tried to avoid.

It comes despite Israeli efforts to avoid a repeat of the chain of events nearly a year ago that saw heavy-handed Israeli police tactics during the Muslim holy month of Ramadan help fan mass Palestinian protests and Israeli communal violence and trigger a Gaza war.

In recent weeks, the Israeli government loosened restrictions on Palestinians’ travel between the West Bank and Jerusalem and coordinated with Arab states ahead of Ramadan.

Security-minded Israel and its Arab partners, eager to avoid violence in Jerusalem during Ramadan and Passover, nevertheless neglected to address a Palestinian hunger for a political solution and dignity.

So why, then, is violence erupting once again in the holy city as Ramadan, Passover, and Easter coincide?

“There were lessons learned from 2021 to handle the situation better; Israeli police have changed their tactics and have tried to keep things calm the first two weeks of Ramadan,” notes Mairav Zonszein, senior Israel-Palestine analyst at the International Crisis Group in Tel Aviv.

“But at some point, even if there are areas of improvement, things will always bubble up if there is no progress on the political side to the conflict.”

Israel and its Arab partners are learning, say analysts, that the pursuit of calm and diplomacy alone cannot prevent conflict in the absence of a political settlement rooted in dignity.

In a stark change from right-wing governments led by former Prime Minister Benjamin Netanyahu, the broad and increasingly fragile Israeli coalition government has chosen pragmatism over populism in its approach to the Palestinians.

It did not impose restrictions on entry from the West Bank to Israeli-controlled East Jerusalem for Ramadan – a policy that longtime observers termed “lenient” given a spate of attacks carried out by individual Palestinians that killed 14 people in Israel in the past month. More than two dozen Palestinians have been killed in recent weeks in clashes with Israeli forces.

In late March, Israeli President Isaac Herzog met with Jordan’s King Abdullah in a rare visit, and Israeli Prime Minister Naftali Bennett followed up with a phone call days before Ramadan to discuss measures to ensure prayer-goers’ access to Jerusalem’s Al-Aqsa Mosque, of which the Jordanian monarch is the internationally recognized custodian.

Israel reached out also to the United Arab Emirates and Egypt, which, with Jordan, share an interest in ensuring calm in Israel and the occupied territories.

The three Arab states also wish to avoid a repeat of the 2021 Gaza war, which saw the Islamist militant movement Hamas surge in popularity among Palestinians.

Instead, they seek to bolster the increasingly unpopular Ramallah-based Palestinian Authority, which is struggling to pay government salaries and is viewed by Palestinians as irrelevant.

But analysts say the focus on keeping the calm and bolstering the PA has created a blind-spot for Israel and Arab states: Palestinians’ rising frustration and demands for dignity.

“Politically, nothing has changed for Palestinians in the past year. If anything, it has gone backwards,” says Ms. Zonszein.

Palestinian fireworks explode around Israeli police in the Old City of Jerusalem, April 17, 2022. The clashes occurred after the police cleared Palestinians from the sprawling Al-Aqsa Mosque compound to facilitate a visit by Jews to the holy site that Jews revere as the Temple Mount.

There are no official talks between Israel and the Palestinians – any political process or negotiations are consistently rejected by Mr. Bennett and many of his political partners – and hopes for Palestinian statehood are scarce.

Meanwhile, the Palestinian Authority itself has withdrawn into what some describe as a closed autocratic mafia, refusing to hold elections and cracking down on dissent in the West Bank. It is increasingly distrusted by Palestinians, who say they are facing increased attacks by Jewish settlers in the West Bank, discrimination against Palestinian citizens of Israel, and violent arrests by Israeli forces in the West Bank that have killed multiple unarmed Palestinian civilians this month.

“Palestinians feel lost. Palestinians have no effective leadership that can advocate for their rights, and there is no prospect for a remotely better future than they have now,” says Tahani Mustafa, International Crisis Group’s West Bank analyst.

“Palestinians are sandwiched between a military occupation that has only gotten worse under Bennett and a PA that has lost all legitimacy,” says Ms. Mustafa, who adds that Palestinians are increasingly venting their mounting frustrations toward Israel.

In recent days these frustrations have erupted over the intrusion of far-right Israelis and Israeli police onto the Al-Aqsa Mosque compound, one of Islam’s three major holy sites, revered by Jews as the Temple Mount.

Passover this year has seen a rising number of increasingly emboldened far-right Israelis praying within the Temple Mount and demanding access.

Each day this week, Israeli police have escorted far-right Israeli prayer groups into the Al-Aqsa compound, an act viewed by Palestinians as inflammatory and a violation of the site, which due to its administration by the Jordanian-affiliated Waqf, is seen as a rare public safe space for Palestinians to gather.

“Because of the coincidence of the holidays this year, it means on both sides there is an increased religious sentiment that something is at stake,” says Khalil Shikaki, director of the Ramallah-based Palestinian Center for Policy and Survey Research.

It has attracted stone-throwing and Molotov cocktail-carrying Palestinian youths eager to retaliate and violent reprisals from Israeli police. Clashes led to police storming inside Al-Aqsa Mosque itself last Friday, the arrest of dozens, and the injury of 140 Palestinians.

Beginning Friday, Israel says it is closing off access to the mosque compound for non-Muslims for the remainder of Ramadan, but the daily incursions have triggered Palestinians’ deep-seated fears of Israel’s intentions over the Temple Mount/Noble Sanctuary. In particular, Israeli security forces have employed a new strategy of forcibly evacuating Muslim prayer-goers from the mosque compound ahead of the visits by the far-right Jewish groups.

Israeli right-wing activists gather for a march in Jerusalem, April 20, 2022. The flag-waving march around predominantly Palestinian areas of Jerusalem’s Old City was planned despite a police ban that sought to prevent an event seen as potentially triggering violence.

The measures have disrupted the visits to Al-Aqsa of Muslims from across the West Bank and Israel as well as the dozens of Muslims practicing Itikaf, in which they spend 24 hours or multiple days in the mosque praying and reading the Quran as encouraged during Ramadan.

The Jerusalem Waqf on Wednesday claimed that the move represented a new Israeli policy of de facto segregating the compound into Jews-only and Muslim-only prayer times – similar to the Tomb of the Patriarchs in Hebron in the West Bank and an upset of a decades-old status quo.

Palestinians are calling on one another on social media to “defend Al-Aqsa Mosque,” leading to dozens of Palestinians – Muslims and Christians alike – to sit defiantly at its perimeter inches away from Israeli police.

Watching developments closely is Hamas, the Gaza-based militant movement which may choose to repeat its 2021 strategy and escalate Al-Aqsa tensions into a war to embarrass the Palestinian Authority, its rival, and bolster its own image as “defenders of Jerusalem” and the true “representatives of Palestinians.”

“Although the Israeli government, regional actors, and the Palestinian Authority do not want war, if Israeli authorities take additional steps that undermine Palestinians’ ability to pray at Al-Aqsa, this can lead to a confrontation with Hamas and bring everything back to last year,” warned Mr. Shikaki.

After a week of Hamas restraint, militants in Gaza fired a rocket toward Israel early Thursday that observers viewed as a “warning.” Israeli jets responded with airstrikes on Hamas facilities.

Amid rising popular anger at home over Al-Aqsa “violations,” the Jordanian prime minister this week hailed Palestinian rock-throwers as heroes, prompting Mr. Bennett to accuse Jordan of “backing those who support violence.” Jordan in turn threatened to recall its ambassador and tear up a recent water-for-solar energy deal with Israel.

The UAE summoned the Israeli ambassador in Abu Dhabi and condemned the violations.

“We have to figure out how to live together, that’s my job; to provide security for Israelis, dignity for Palestinians. … We’re succeeding,” Mr. Bennett said of Israel’s handling of the crisis in an interview with CNN’s Christiane Amanpour on Wednesday. “But at the end of the day, my utmost responsibility is to provide security to the Israeli people.”

Observers say that as long as Palestinians are left without hope, that security will prove elusive.

“While creating limited economic opportunity and diplomacy is an improvement from last year, it has done nothing to resolve the overall Israel-Palestinian conflict, which this government has chosen not to pursue,” says Ms. Scheindlin, the public opinion expert.

“Now the situation can get out of control any second, and it would be another setback for everyone.”