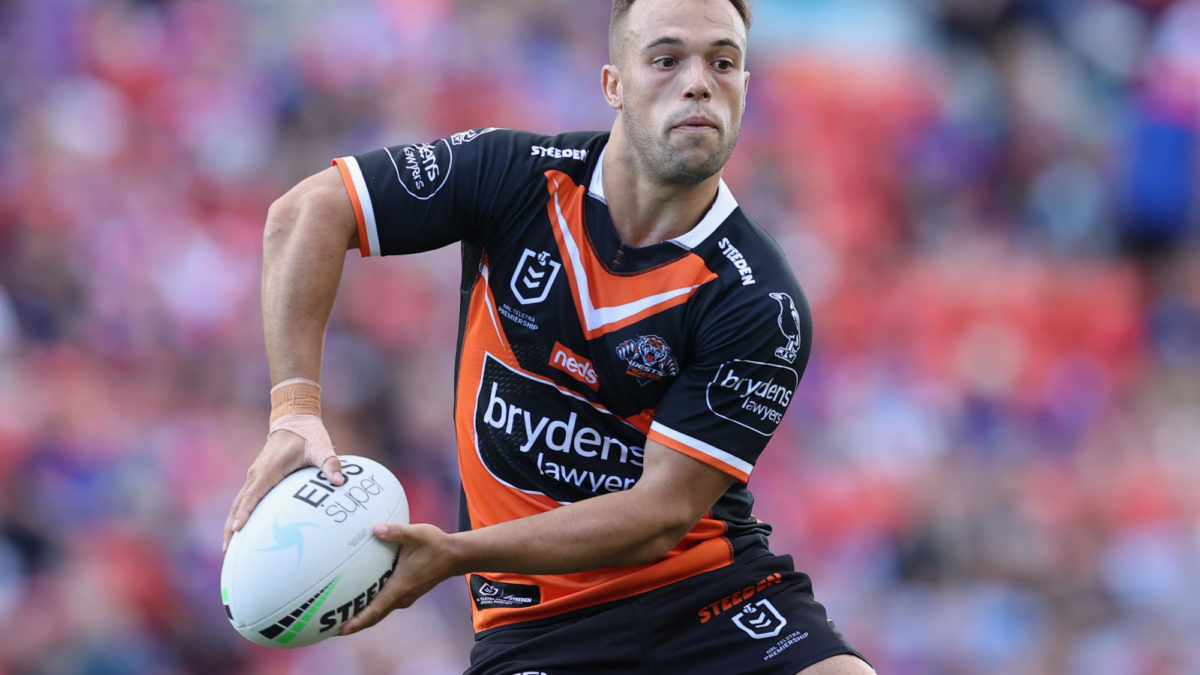 Last week was one of the upsets of the season with the Tigers downing the Eels with the final play of the game to grab their first win of 2022.

As with any boilover, it required quite a lot to go right for Michael Maguire’s men to stand a chance, both in terms of their own performance and in terms of pure luck.

Sometimes it’s better to be lucky than good, of course, and there’s a strong argument that on Monday afternoon, the Tigers were certainly that. Nine times out of ten, Parra win that game.

For all the talk of resilience, gumption and playing for each other, I don’t buy into that sort of thing too much. Lots of bad football teams try hard, as do almost all good football teams.

What makes the difference is usually tactics, performances – good or bad – and fortune, in that order.

If you set up with a clear tactical plan, you can negate your weaknesses and expose those of your opponent, closing the gap between a good team and a bad one.

If your players perform well as individuals, then the likelihood of executing the chances that come your way go up massively. When you get those first two right, you set up the conditions for fortune to go your way.

One can either see Monday’s result as a culmination of Tigers’ performances that were likely to eventually lead to a win, or a confluence of factors that fell in their favour to produce the conditions that they could exploit on the day.

Me, I’m in the latter camp. The Tigers did well to be competitive and stay in the fight long enough for Parramatta’s off-day with ball in hand to matter. Wests won because they executed the few chances that the got, while the Eels didn’t do enough with the many that came their way.

The problem arises when those conditions have to then occur week after week. You could certainly make an argument that the Tigers had been on the wrong side of luck in results previously – the Titans and Warriors games in particular – and were due a spot of reversion to the mean.

It’s also a lot easier to invite luck your way when the scoreboard is on your side, and the Tigers were never behind. When your opponent has a predilection for trying to score off every play, a spot of scoreboard pressure goes a long way to making them force their own hand yet further.

On a statistical level, all the major indicators for how to win a rugby league match went against the Tigers against the Eels. They lost the battle of possession and territory. They conceded more penalties and more metres. They missed more tackles and made more of them in their own end.

Ultimately, the only stats that went in their favour were the completion rate and errors – more of an indication of Parramatta’s failure to attack well – and, obviously, the major stat of the scoreline. It’s not sustainable to win football matches in such a manner.

So, how can they repeat the trick against South Sydney this weekend? Well, there are a few ways that they can both recreate the conditions of last time out, and move a few more pieces in their favour.

Stick with it and hope for lightning to strike twice

‘Hope for lightning to strike twice’ doesn’t sound like a great tactic on the face of it. But it is something that might come to fruition with South Sydney.

The conditions that the Tigers were able to exploit were that their opponents had chances, but failed to take them, and there’s certainly precedent for that to happen again.

The Bunnies have already lost to the Broncos in a game that was defined by their own profligacy rather than the great successes of their opponents.

Indeed, in terms of lucky wins, Brisbane’s in Round 1 is the luckiest of the year so far: they got a field goal from a back rower and an interception while their opponents lost their starting fullback, his replacement and then completed at 66 per cent with a halfback in his second game of NRL.

Dive into the stats and there’s plenty of evidence that the Rabbitohs, like the Eels last week, are liable to create chances but not take them.

They’re the one of the least efficient attacking sides in the comp – second worst for completions and worst for errors – and even when they have been winning, have struggled to maintain completions over the course of 80 minutes.

In the last two weeks, it has happened twice in a row. In the second half against the Dogs and against the Dragons, there was a huge falloff in attacking efficiency as the Bunnies sought to throw the footy.

If the Tigers can stay in the fight that long, then they have a chance to upset the odds. The same factors at play against Parra can certainly come around around again – get on the board early, make Souths make mistakes, take your opportunities when they come your way.

Take the slack off Hastings – and find the floor better

If the Tigers are going to repeat their win, they’re going to need another big showing from Jackson Hastings. 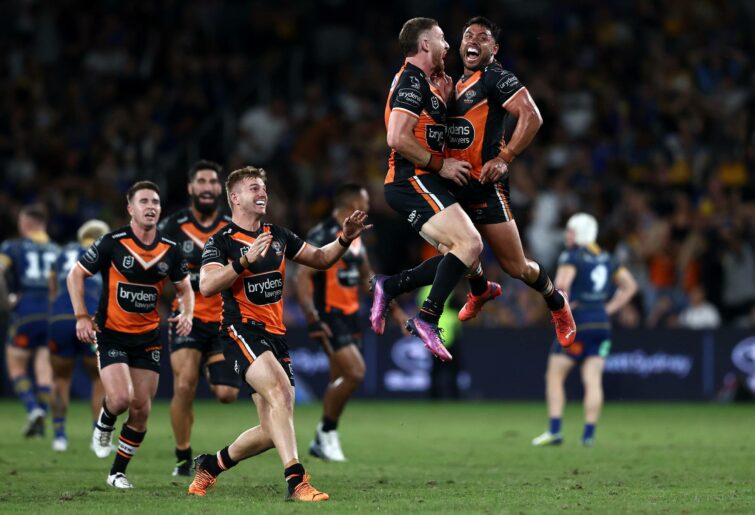 If you’ve seen any Super League in the last few years, you’ll know that Jacko can do this sort of thing repeatedly, but even by his own standards, last week was ridiculous.

The halfback touched the football 88 times in the match, roughly 2.5 times per set, and that’s not really a sustainable amount of influence for one player to have.

Hastings not only averages the most possessions of all NRL halfbacks – albeit off a smaller sample size of three games – but also the most runs, the second most line engagements and the second most passes. He’s got his hands in everything and if you’re Souths, you now know what is coming.

This is where Luke Brooks has to step up. Last week was his best performance in yonks, and the potential is there for him to thrive when someone else is doing the bulk of the work.

He has to ice the plays that he iced last week: indeed, though Hastings did the majority of the work, Brooks cashed in with two try assists and two line break assists.

One area that the Tigers consistently failed in against Parramatta, and which they can certainly improve against the Bunnies, is Brooks’ kicking.

He managed 316 kicking metres – that’s good – but Parramatta managed 258 kick return metres and regularly caught the ball on the full. That’s not good for stopping momentum and if Brooks does that against Souths, they’re in trouble.

Lucky for him, the catcher is changing. Gutherson is one of the best in the league in getting to the ball before it bounces, so he can make decent kicks look bad, and is third in the league for kick return metres.

Blake Taaffe operates at about two-thirds of the levels of Gutherson and is a significant drop-off on Latrell Mitchell. If the Tigers can kick better, and find the floor more frequently, it will give them a huge boost in set starts.

Be more accountable around the ruck

The key area where Parramatta exposed the Tigers last week, and where Souths will look to operate this, were set starts and around the ruck.

It’s obvious to say that Wests need to win the ruck, but last week, by most metrics, they didn’t do that and won despite their loss up front.

There was a lot of chat about how the forwards really stood up, and on intangibles like effort and spirit that might be true, but in things you can count I’m not sure that it was.

The Tigers won on average metres per set, but when you factor in that the Eels completed at 71 per cent and therefore had sets regularly stop after two or three tackles, it is clear that had they completed higher they would have won that metric.

When things went well for Parramatta, Reed Mahoney was central to it. He only ran four times, but averaged nearly 10 metres per run. If they afford the same freedom to Damien Cook, the Tigers will get destroyed through the middle.

Cook is far more effective as a dummy half runner than Mahoney, and consequently is also far more willing to jump out, as the Bulldogs discovered to their detriment last week.

What the Tigers tried last week to slow the ruck saw them concede four set restarts and six penalties, with a bulk of those coming out of yardage in the first half. If they allow field position and pressure to build up like they did last week, they’ll lose.

The first step in that is slowing the ruck down – within the rules – and exerting control there. The Dogs tried this last week against the Bunnies and ended up with a man in the bin, which saw Souths run in three tries in ten minutes.

That’s most crucial in their rotations, too: Souths changed the momentum of the game around the 20-30 minutes in last week against the Dogs, when Liam Knight and Hame Sele rolled on.

Michael Maguire has to be alive to that threat. Sele will start tomorrow, according to the team lists, with Davvy Moale, a destructive runner, coming on at first rotation. Alex Twal, who was excellent last time around at Parramatta, has to be up to the challenge.