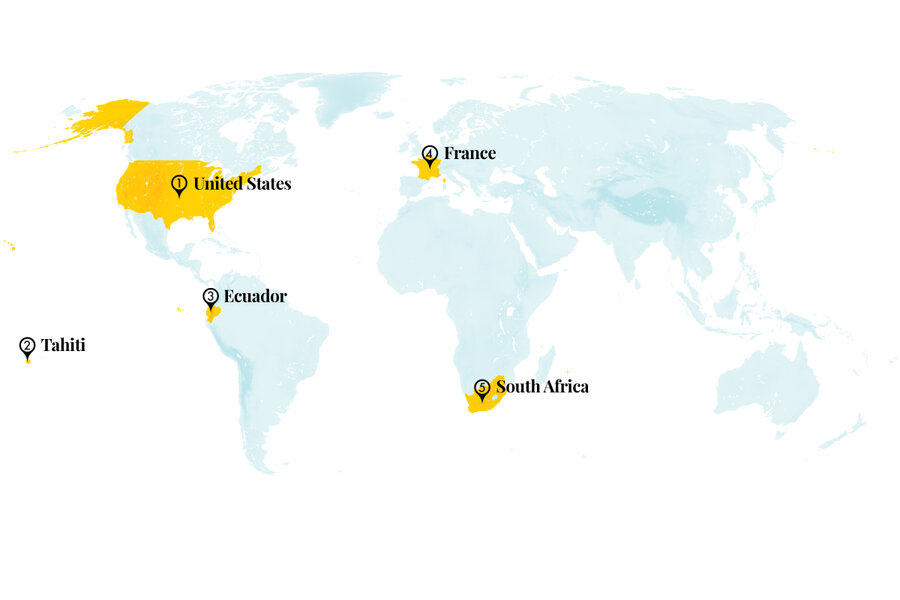 As well as change targeting specific populations, one commitment in our roundup – to further reduce the impact of fossil fuels – was made by an international company that affects billions of people.

Exxon Mobil committed to carbon neutrality in its global operations by 2050, in response to pressure from investors and the public. The oil giant will reduce carbon emissions by protecting against methane leaks and modernizing equipment while also investing in new technologies like carbon capture, hydrogen power, and biofuels. The decision aligns the company with the Oil and Gas Climate Initiative, a consortium working to speed up the industry’s response to climate change, and follows similar moves by large European oil companies like BP and Royal Dutch Shell.

Laws and court rulings may lead public opinion, or follow it and cement what most people agree is right. In our progress points this week, authorities in South Africa, France, and Ecuador have addressed gender violence, “conversion therapy,” and Indigenous land rights.

When it comes to transitioning to renewable energy, Exxon lags behind rivals. And environmentalists have been quick to criticize the new goals for not applying to emissions linked to the use of gasoline and natural gas, which constitute around five times the emissions caused by production. But the announcement may be one sign that priorities are shifting. Last May, Exxon was pressured to take on three new directors recommended by an activist hedge fund to help the firm operate in a low-carbon world, and the company is dedicating $15 billion by 2027 to initiatives that will reduce emissions.
Thomson Reuters Foundation, The Wall Street Journal

A sprawling coral reef seemingly untouched by climate change was discovered off the coast of Tahiti. The pristine reef, which resembles a vast bed of roses, stretches nearly 2 miles, making it “one of the most extensive healthy coral reefs on record,” according to UNESCO. Scientists have grown increasingly concerned about the effects of climate change on coral reefs worldwide, which cover only around 1% of the seafloor but provide a habitat for over 25% of sea life.

Many reefs in the South Pacific were hit by a wave of coral bleaching in 2019. Cooler temperatures likely protected this particular reef, which sits at between 100 and 300 feet below the ocean surface. That depth made it difficult for researchers and photographers to study the area, a feat accomplished only with special breathing equipment and a type of mirrorless full-frame camera that works in low light. The find offers new hope that scientists will discover more thriving reefs, with 80% of the world’s seabed left to map. As UNESCO Director-General Audrey Azoulay put it, “To date, we know the surface of the moon better than the deep ocean.”
The New York Times, Deutsche Welle

Extractive oil and mining projects now need consent from Indigenous communities in Ecuador. The nation’s constitution guarantees Indigenous people the right to be consulted before extractive development projects take shape on or near their territory. In practice, the process has not always been upheld. The highest court recently reaffirmed this requirement by ruling that the rights of the Sinangoe Indigenous community were violated in 2018 when the government sold mining concessions without consultation on Sinangoe territory in the Amazon.

A woman from the Waorani community speaks at a protest against new oil projects in the Amazon, in Quito, Ecuador, Oct. 18, 2021.

In turn, the court ruled that the state must ensure a “clear and accessible” consultation that includes community consent, strengthening land protections for each of Ecuador’s 14 Indigenous nations. The government can move forward with extractive development without consent in “exceptional circumstances,” but never if a project causes “disproportionate sacrifice” to the community and local ecosystem. Indigenous groups celebrated the ruling. “The Constitutional Court ratified that the state has to listen to us, so this sets a very important precedent for us, and for the whole Indigenous world, because our voices are not always listened to,” said Nixon Andy of the Sinangoe community.
Mongabay

France banned “conversion therapy” in defense of LGBTQ rights. The National Assembly voted unanimously to ban the scientifically discredited practice, defined in the law as efforts that “aim to modify or reprimand sexual orientation or gender identity.” Conversion therapy is an umbrella term for a wide range of formal and informal faith-based, psychotherapy, and medical interventions. Offenders will face up to two years in jail and €30,000 ($34,000) in fines. These penalties increase for cases that involve minors or other vulnerable groups.

Human rights organizations refute the underlying assumption of conversion therapy – that sexual orientation or gender identity can and should be changed. Attempts to alter a person’s identity are inherently harmful, degrading, and discriminatory, according to a United Nations human rights report, which calls for a global ban on the practice that “may amount to torture” in severe cases. The measure had already received overwhelming support in the French upper house, although 28 conservative legislators opposed its passage. “Let’s be proud of it,” tweeted President Emmanuel Macron. “Because being oneself is not a crime.”
France 24, BBC

South Africa passed new legislation to better protect women from gender-based violence. A government study from 2020 found that 21% of women in South Africa have experienced physical violence by a partner, with higher rates among lower-income women. The legislation broadens access to protection orders, allows intermediaries to give evidence of abuse in court, recognizes “sexual intimidation” as a punishable offense, and obligates adults to report sexual offenses against vulnerable persons, among other changes.

The laws are part of the National Strategic Plan on Gender-Based Violence & Femicide, a collaboration among government agencies, international organizations, and local civil society groups that grew out of a 2018 summit. President Cyril Ramaphosa acknowledged that strengthening legal recourse against domestic violence does not address the root problems behind abuse. But he sees the move as a step in the right direction: “This puts into law the principle that violence against women and children is everyone’s responsibility.”
South Africa Government News Agency