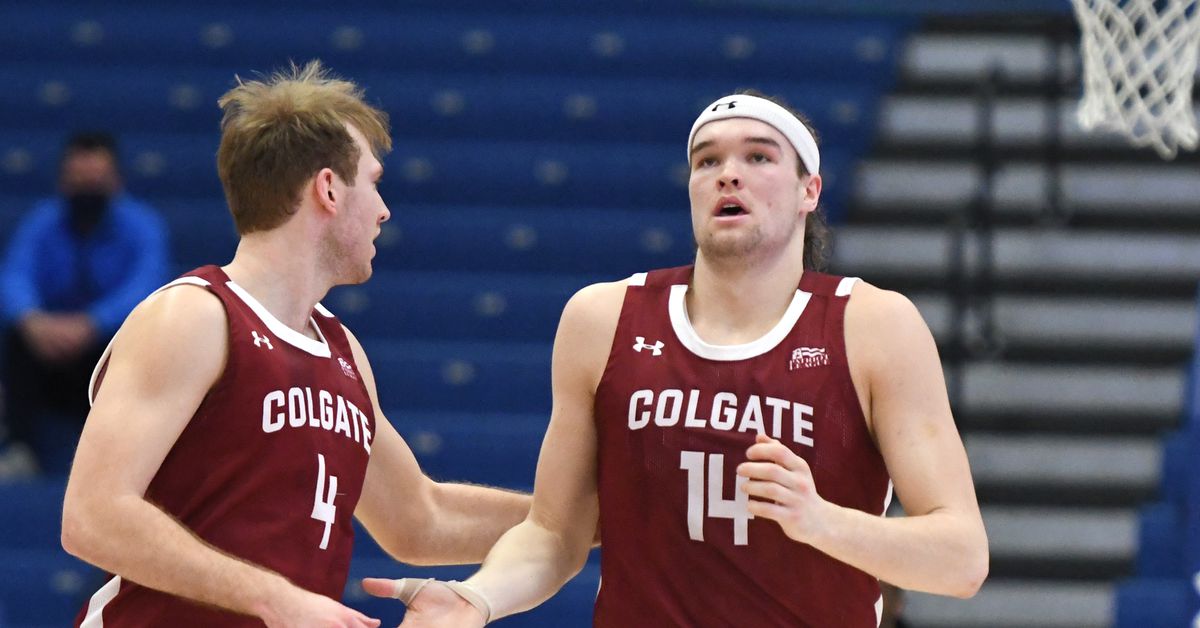 What You Need to Know

For the third time in as many years (excluding 2020), the Colgate Raiders are headed to the NCAA tournament after rolling through the Patriot League and gobbling up the conference’s automatic bid.

Here are three things you need to know about the Raiders before deciding whether or not to pull the trigger on a 14/3 upset of Wisconsin.

1. They can light up the scoreboard

History tells us that offensive-minded teams one-bid leagues are far more likely to pull first round upsets than teams that have gotten to the Big Dance primarily with their defense. That’s good news for a Colgate team that ranks second in the nation in three-point shooting (40.1 percent), eighth in assists per game (17.2), and 11th in effective field goal percentage (59.9 percent). In their three Patriot League tournament games, the Raiders scored 91, 81 and 74 points.

Every team from a one-bid league is going to be riding a winning streak of some sort into March Madness (well, except Jacksonville State I guess … grow up, NCAA … let Bellarmine play), but the Raiders have been particularly hot. Colgate has won its last 15 contests, hasn’t been beaten since a 4-point loss at Boston U. on Jan. 28, which is also its only setback since all the way back on Jan. 4.

Eleven of Colgate’s 15 wins on this streak have come by double figures. The Raiders were especially dominant in the Patriot League tournament, winning their three games by 28, 20 and 16 points, respectively.

3. They’ve already shown they can slay a giant

Colgate played an extremely challenging non-conference schedule, nearly pulling upsets of both NC State (77-74) and Pittsburgh (71-68). The ACC team who wasn’t quite as fortunate against the Raiders was Syracuse, who got blown away by Matt Langel’s squad, 100-85 back on Nov. 20.

While Syracuse isn’t nearly the team Wisconsin is, Colgate will likely try to utilize the same game plan against the Badgers they they rode to victory against the Orange: Take a bunch of threes, make a bunch of threes. The Raiders launched a total of 43 shots from beyond the arc against Syracuse, and connected on 18 of those. Jack Ferguson and Nelly Cummings both went 6-of-13 from deep to lead the outside onslaught.

Why They Can Advance

Any team that shoots the ball as well as Colgate does is going to have a chance in virtually any game it plays. What separates the Raiders from other mid/low major teams in this tournament that have the ability to score is that Colgate also happens to have a pair of bigs (6’11 Jeff Woodward and 6’10 Keegan Records) who should be able to keep Wisconsin from dominating on the glass.

But the biggest reason Colgate has a shot at advancing is who they’re playing. After a string of narrow victories, Wisconsin enters the NCAA tournament coming off back-to-back losses to Nebraska at home in its regular season finale and Michigan State in its first game of the Big Ten tournament.

Perhaps more troubling than that is the fact that, as the chart below shows, the Badgers have a propensity for taking (and not making) a whole lot of bad shots.

A team that can get from deep against anyone against a team that is prone to lengthy droughts and lapses of poor judgment on offense is the perfect recipe for a closer-than-expected 3/14 game.

What Past Cinderella They Remind Us Of

So technically Colgate wasn’t a Cinderella three years ago, but their statistical profile from that season is eerily similar to their current one. That Raiders team shot the three at a nearly 40 percent clip, had nearly an identical record as this year’s group, and entered the NCAA tournament with a lengthy winning streak that had been capped by a dominant run in the Patriot League tournament.

Colgate was a 15-seed that year, but they pushed second-seeded Tennessee to the absolute brink before ultimately falling in the final minute, 77-70. Do not be surprised at all if this year’s Raiders put a similar scare into another power conference opponent that has aspirations of playing deep into March.