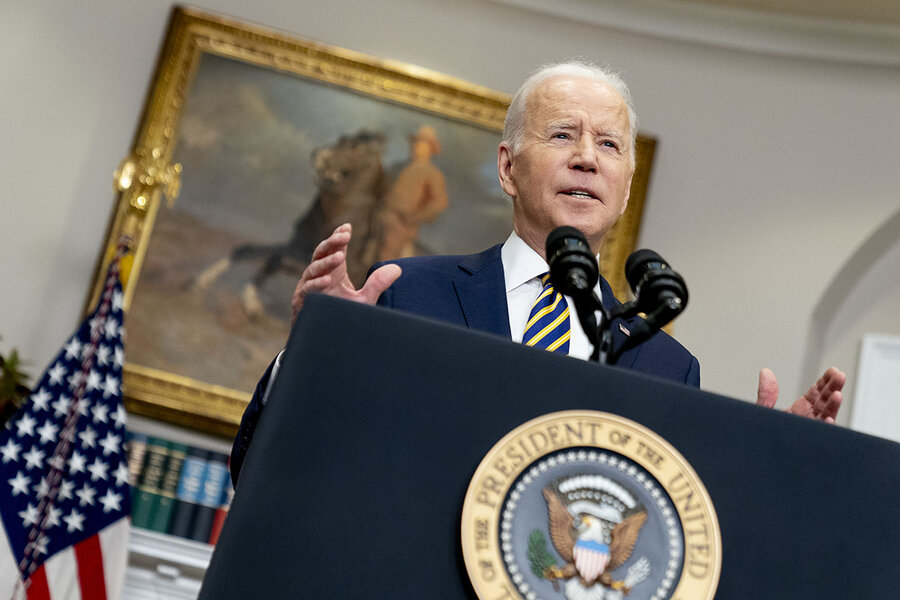 When President Joe Biden declared a ban on Russian oil and other energy imports, he said he was striking a “powerful blow to Russia’s war machine” in Ukraine.

But the move means Washington must find alternative sources of crude elsewhere, and its search for new supplies, from Venezuela to Iran to Saudi Arabia, underscores the challenge of feeding the oil-dependent U.S. economy while preserving President Biden’s values-based foreign policy.

The hunt for oil to replace banned Russian imports is forcing Washington into some difficult choices. But in one case, it might also lead to a happier outcome.

President Biden’s bid to revive the Iranian nuclear deal, and thus restart Iranian oil exports, had seemed on track until Russia – a key signatory of the accord – scuppered it last week. Now Western diplomats are seeking creative ways out of the impasse.

Washington’s hope of seeing more oil from Saudi Arabia has put Mr. Biden in a moral quandary. He had banned offensive weaponry sales to the kingdom and refused to deal with de facto ruler Mohammed bin Salman over human rights concerns. Now Riyadh hopes it can escape such punishment by pumping more crude.

In Venezuela, though, the picture is brighter. A move to end U.S. sanctions against the biggest South American oil producer could help break a deadlock in talks between President Nicolás Maduro and the opposition, which could strengthen the rule of law and improve the country’s humanitarian situation.

But the move means Washington must find alternative sources of crude elsewhere, and its search for new supplies, from Venezuela to Iran to Saudi Arabia, underscores the challenge of feeding the oil-dependent U.S. economy while preserving President Biden’s values-based foreign policy.

“There is an energy crisis in the world. If you want to focus on values, you have to pay more,” says Umud Shokri, a Washington-based energy security adviser and expert in energy diplomacy.

The hunt for oil to replace banned Russian imports is forcing Washington into some difficult choices. But in one case, it might also lead to a happier outcome.

That blunt fact, combined with the West’s need for oil, is leading U.S. diplomacy in novel directions.

In Venezuela, oil may turn out to be the lubricant for stalled negotiations between the government and opposition, and for an end to U.S. sanctions.

In Iran, the global thirst for oil could rewrite the rules governing nuclear negotiations with the government in Tehran.

And Washington appears ready now to deal with Saudi Arabia’s de facto ruler Mohammed bin Salman, hitherto a pariah for the Biden administration over allegations that he ordered the 2018 murder of journalist Jamal Khashoggi.

“The international energy market has its own dynamics independent of values, or whether an energy-producing country is democratic or not,” Mr. Shokri points out.

Here’s a look at how the U.S. ban on Russian oil is creating new diplomatic dilemmas – and opportunities – elsewhere.

Diplomats had been hopeful in recent weeks that Tehran and the international community were on the brink of signing a deal that would have meant the end of sanctions on Iranian oil exports in return for a cap on Iranian uranium enrichment.

Russia threw a wrench into the negotiations in Vienna last week, however, by demanding that Russia-Iran trade be exempt from the sanctions imposed on Moscow in response to the Ukraine war.

Russia is a signatory to the original 2015 nuclear deal from which Washington withdrew under President Donald Trump in 2017 and is now trying to revive. Moscow’s agreement is required to resurrect the deal, and its demand has put the monthslong talks on pause.

Since Tehran has rejected any deal without Russia, U.S. and European diplomats have reportedly been mulling the idea of a stopgap, stripped-down accord that would enshrine the bare bones of an agreement to lift Western sanctions and limit uranium enrichment below weapons grade.

Even if that came to pass, though, Iran seems likely to press its advantage as an oil producer. On Sunday, a majority of Iranian lawmakers issued a petition urging the government to use the rising demand for its oil as leverage. “Now that the Ukraine crisis has increased the West’s need for the Iranian energy sector, the U.S. need for reduced oil prices must not be accommodated without considering Iran’s righteous demands,” the petition read.

“I am not optimistic that we will see a deal in the short-run,” says Umud Shokri, the energy expert. The West may be ready to lift sanctions on Iran that “have had no effect on changing regime behavior,” he believes. But Russia fears that open Iranian spigots would mean lower world prices.

In Saudi Arabia, the U.S. relationship with its ally is pitting American energy needs against its values.

As one of the world’s largest oil producers, Saudi Arabia retains influence over OPEC’s output. It is also leading a war in Yemen that has killed more than 377,000 people, creating a historic humanitarian crisis.

Saudi Crown Prince Mohammed bin Salman attends a session of the Shura Council in Riyadh, Saudi Arabia, Nov. 20, 2019. President Joe Biden is said to be reconsidering his refusal to meet the crown prince, on human rights grounds, in order to secure more oil.

The Biden administration has banned the sale of offensive weapons to Riyadh, and the U.S. president has refused to deal directly with Crown Prince Mohammed over his alleged role in Mr. Khashoggi’s death.

In pursuit of oil, however, Mr. Biden not only attempted to call the Saudi prince – a call the prince allegedly refused – but also is considering a visit to Saudi Arabia to publicly meet Crown Prince Mohammed.

“The crown prince has carried out repression and war because he thinks he is not going to be held accountable,” says Abdullah Alaoudh, research director for Saudi Arabia and the United Arab Emirates at the Washington-based Democracy for the Arab World Now (DAWN) and son of a high-profile Saudi political detainee.

“Just imagine if he is fully embraced by the White House – what will he do then?”

The Saudi government has reportedly conditioned any increase in oil production on resumption of offensive weaponry supplies and legal immunity for the crown prince and his close advisers, who face multiple lawsuits implicating them in the murder of Mr. Khashoggi, including a lawsuit brought by DAWN, the organization Mr. Khashoggi founded.

U.S. officials refuse to comment on U.S.-Saudi talks. But by relaxing its stance toward Riyadh since Russia’s invasion of Ukraine, “the Biden administration has given the crown prince the impression that they need him more than he needs them,” says Mr. Alaoudh.

A ray of hope for Venezuela

In Venezuela, home to the largest oil reserves in the world, U.S. efforts to ease its energy crisis could help jump-start a diplomatic deadlock.

Venezuelan President Nicolás Maduro speaks after the signing of an accord with Russia, at the presidential palace in Caracas, Venezuela, on Feb. 16, 2022. Mr. Maduro is tempted by the prospect of an end to U.S. sanctions against Venezuelan oil as Washington seeks new sources of crude.

U.S. sanctions on Venezuelan oil in 2019 sent a firm pro-democracy message, but observers say they also backed Washington into a corner. Caracas cozied up to Russia and further cracked down on political opponents; the sanctions worsened an already dire humanitarian situation that has forced millions of Venezuelans to flee their country; and there have been few opportunities to spark stalled negotiations between President Nicolás Maduro and the opposition.

“Ukraine changed the calculus,” says David Smilde, a senior fellow at the Washington Office on Latin America, offering the Biden administration a chance to “get out from under” the Trump-era sanctions. “Because oil and gas prices are so high and it’s now a national security issue, the U.S. may be more willing to negotiate sanctions with Maduro in order to help break the Venezuelan stalemate,” he says, though lifting sanctions would likely be a drawn-out process.

Even if it were fast, that would not make any immediate difference to U.S. oil supplies, points out Terry Lynn Karl, a professor at Stanford University and author of “The Paradox of Plenty: Oil Booms and Petro-States.” Production is low and could take a year or two to ramp up, she adds. “You don’t just turn a spigot and oil flows again and prices go down and everything is fine.”

But Venezuelan oil is attractive; transport costs are lower than they are from the Middle East, and refineries suited to Venezuelan heavy crude already exist on the Gulf Coast. The scent of an end to sanctions could bring Mr. Maduro back to the negotiating table in Mexico City, where talks with opposition leader Juan Guaidó stalled last fall.

Dr. Karl is cautious. “Right now, I don’t think this is an opportunity for democracy,” she says. “But it is a huge opportunity to create a negotiations road map with real benchmarks,” she adds, possibly improving the humanitarian situation and strengthening the rule of law.

“You don’t ever build democracy from the outside,” she says. “You can only assist.”