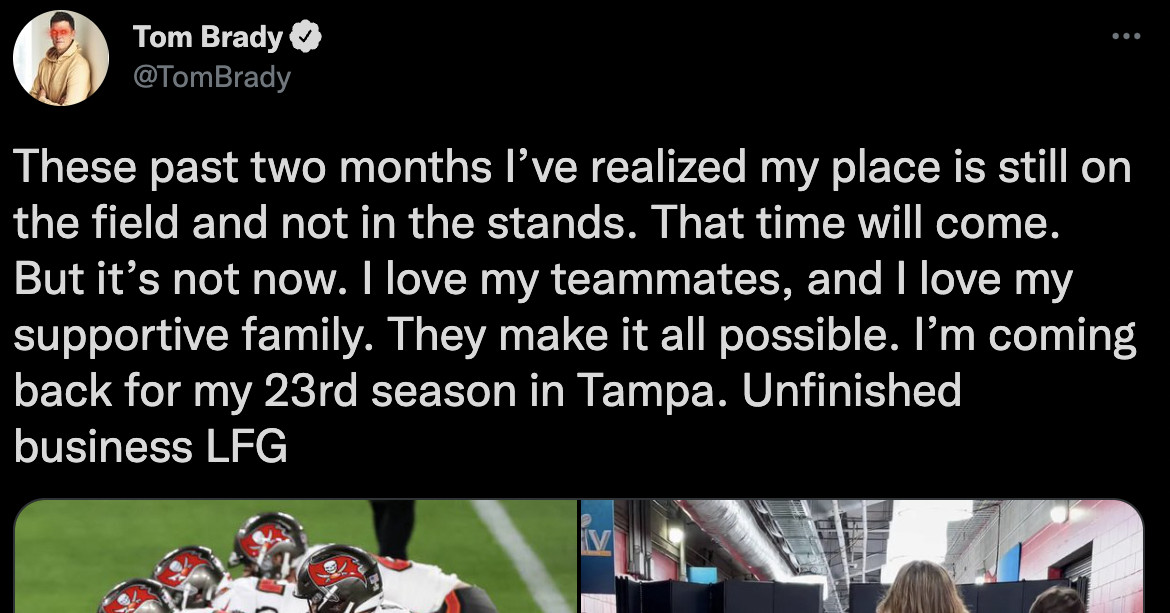 It turns out March Madness extends to football as well. On Sunday evening Tom Brady announced he was returning to the NFL, two months after announcing his retirement.

Brady explained that after consulting with his family and having two months to think, he realized his place was back on the field — not staying at home.

These past two months I’ve realized my place is still on the field and not in the stands. That time will come. But it’s not now. I love my teammates, and I love my supportive family. They make it all possible. I’m coming back for my 23rd season in Tampa. Unfinished business LFG pic.twitter.com/U0yhRKVKVm

There’s the obvious football fallout from this. Immediately the Buccaneers are catapulted back into being the favorites in the NFC South, contending once more for the NFC Championship and perhaps even a Super Bowl. Tampa Bay were largely at a crossroads, needing to decide whether to rebuild and bank on Kyle Trask at QB (who they selected with a second round pick in 2021), or continuing to chase wins with their aging, win-now roster.

Tampa Bay had been linked in recent days to trading for Deshaun Watson, the disgraced Texans QB who is still facing civil litigation from 22 women for sexual assault, despite a grand jury in Houston saying they wouldn’t pursue criminal charges against the quarterback. Several NFL teams were rumored to be interested in trading for Watson, though with a no-trade clause the ball was in his court to decide where he would land. It was widely believed that Tampa Bay could be a very real chance, now that is gone — leaving the door open for the Panthers, Saints, Browns and Steelers, all who have been rumored to be interested in making a trade.

Look, no shade on Tom Brady. I absolutely get not wanting to sit at home. Hell, I take a one week vacation and I start to get the writing itch because I hate not feeling creative and productive — but dude, come on now. Selection Sunday is one of the only days of the year mid-major colleges and athletes who will never make it to the pros get to be in the spotlight for a night get appreciated. Now, Brady has completely overshadowed one of college basketball’s biggest nights. Surely this could have waited until Monday morning, right?

In any event, the NFL will be impacted in numerous ways in 2022 by this announcement. Brady’s return could influence free agency, the draft and have a domino effect throughout the league. Tim will tell how dramatic the fallout will be, but TB12 is back. Brace yourselves.