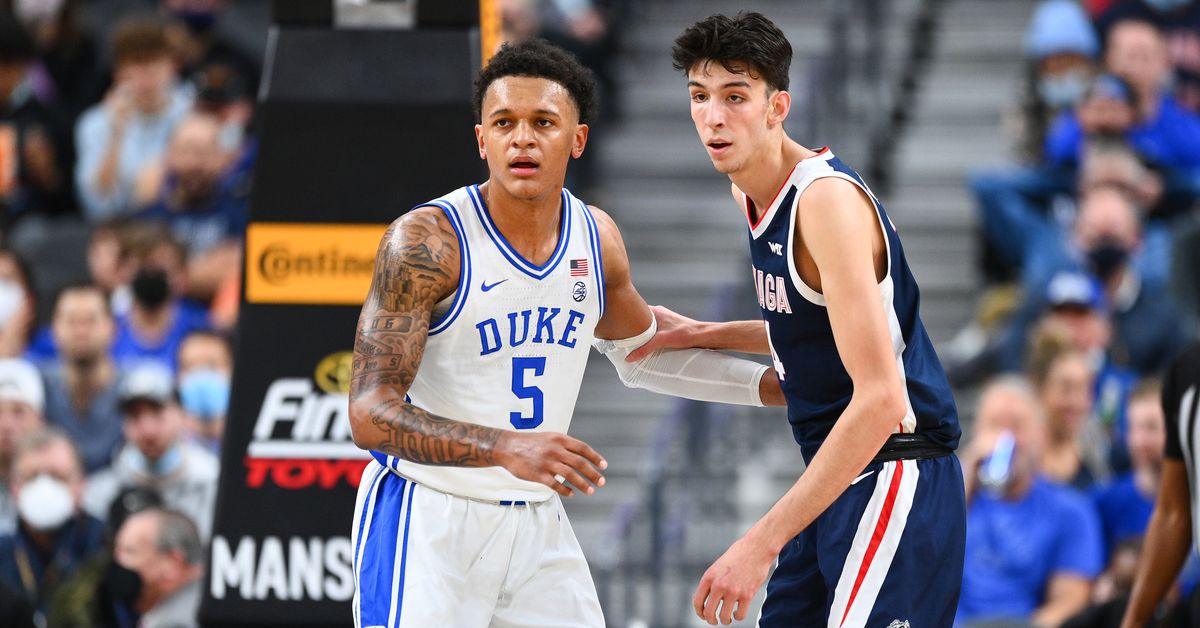 The No. 1 overall seed in the NCAA tournament is supposed to have the easiest path through the bracket. The tournament is seeded on an S-Curve, which means top team in the field is supposed to face the weakest No. 2 seed, strongest No. 3 seed, and weakest No. 4 seed. While that sounds good in theory, it would be hard to blame Gonzaga if they feel differently this morning.

The Bulldogs are a No. 1 seed in the men’s NCAA tournament for the third straight year. They’re the No. 1 overall seed in the field for the second straight season. Gonzaga has accomplished just about everything a program can without winning a national championship. While the Bulldogs certainly have the talent to do it this year, their road feels incredibly difficult.

As the 2022 men’s NCAA tournament was revealed on Selection Sunday, it immediately felt like the West was the dreaded Region of Death. Here’s why.

While this is a new Gonzaga team from the one that started 31-0 last season before falling to Baylor in the national title game, this is still the No. 1 overall team in the field for a reason. Veteran big man Drew Timme and freshman phenom Chet Holmgren form the best 1-2 punch of any front line in America. The Zags also have an experienced point guard in Andrew Nembhard running the offense in the halfcourt. Julian Strawther has emerged as a dynamic wing scorer, while Rasir Bolton blossomed into one of the best shooters in the country.

Gonzaga is the only team that’s top-10 in both offensive and defensive efficiency entering the tournament. This is a legitimate powerhouse with the potential top pick in the NBA draft in Holmgren. So why is their path so hard?

Once Gonzaga gets past its opener against Georgia State, they’re going to have a tough round of 32 matchup regardless of who wins the 8-9 game between Boise State and Memphis.

Boise State won the Mountain West regular season crown and the conference tournament. Memphis has simply been playing like one of the best teams in the country since freshman guard Emoni Bates exited the lineup with an injury. The Tigers are 12-2 in their last 14 games, and enter the tournament playing their best ball after an ugly start.

Boise is the second-highest rated No. 8 seed on KenPom, only behind the San Diego State squad they beat in the Mountain West tournament title game. Memphis is the highest rated No. 9 seed in the field. Gonzaga will be favored, possibly by double-digits, against either team, but it surely won’t be a walk in the park.

Arkansas and UConn are both feisty as No. 4 and No. 5 seeds respectively

Ask SEC opponents about how hard it is to play Arkansas. The Razorbacks won 14 of their final 16 games in conference play before entering the SEC tournament, which included home wins against Kentucky and Tennessee. Arkansas was upset off Texas A&M in the conference tournament, but this is still a really good team led by an excellent senior point guard in JD Notae and breakout sophomore center in Jaylin Williams.

UConn has the profile of a potential darkhorse to make a deep NCAA tournament run, too. The Huskies play at a slow pace and control the tempo of every game they play. They have a dependable lead guard in RJ Cole and a great big man in sophomore Adama Sanogo. Dan Hurley has this program headed in the right direction.

UConn and Arkansas are both rated as top-20 overall teams on KenPom entering the tournament. Gonzaga will again be a big favorite in any Sweet 16 matchup, but it won’t be an easy W.

Duke is technically the lowest-rated No. 2 seed after a brutal close to the season that saw the team lose Coach K’s final home game to North Carolina, and then botch the ACC tournament championship against Virginia Tech. However, this Blue Devils roster is still just as talented as any in the country.

Gonzaga knows how good Duke is. Duke gave the Zags one of their three losses by beating them 84-80 in Nov. The Blue Devils feel like they’re going the wrong way as they start Coach K’s last dance, but any lineup with Paolo Banchero, Mark Williams, AJ Griffin, Wendell Moore, and Trevor Keels won’t be an easy out.

Texas Tech lost head coach Chris Beard to Texas over the offseason, but former assistant Mark Adams reloaded the roster with transfers and maintained an elite defense. The Red Raiders have the No. 1 defense in America with a long and athletic lineup that features no one under 6’6. Texas Tech doesn’t have a natural shot creator at point guard, but they do have an entire team of tough, physical, and disciplined defenders who can give any unit fits. If junior guard Terrance Shannon can get on a heater offensively, the Red Raiders might have just enough offense to breakthrough the bracket.

Gonzaga should still come out of the West, but it won’t be easy

Gonzaga’s mix of talent objectively feels like the most impressive in the country entering the tournament. It also feels like they have a super difficult path through the bracket.

There isn’t really a formula for beating the Zags. When I asked our team site The Slipper Still Fits what the team’s biggest weakness was, this is what they said:

In my opinion, and I’m really not trying to go full meathead fan here, Gonzaga’s flaw has been their toughness. In 3 of their 4 losses dating back to the Baylor game, the refs have called a loose whistle and allowed a physical game, which is fine, but Gonzaga failed to match their opponents toughness (Baylor, Duke, SMC last night) in those fist-fight type of games. The Zags want to play fast, free-flowing and beautiful basketball but when they have had to grind against a physical opponent they do not always rise to the occasion. Gonzaga can win that type of game (see the W over Texas Tech), but they do not want to play that way.

If Gonzaga breaks through to another Final Four, they will have really earned it this time.