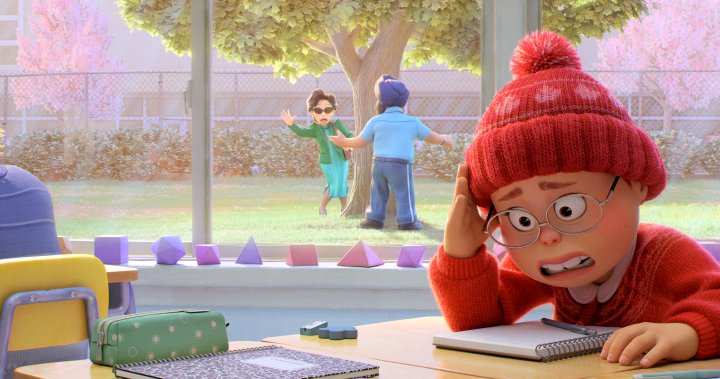 He apologized to all his employees but especially to the LGBTQ2 community at Disney, saying “It is clear that this is not just an issue about a bill in Florida, but instead yet another challenge to basic human rights.”

“You needed me to be a stronger ally in the fight for equal rights and I let you down.”

“You needed me to be a stronger ally in the fight for equal rights and I let you down. I am sorry.” pic.twitter.com/4px8AQbFhS

Disney will be halting all political donations in Florida and will undergo a review of their framework for “political giving.”

“We at Pixar have personally witnessed beautiful stories, full of diverse characters, come back from Disney corporate reviews shaved down to crumbs of what they once were. Nearly every moment of overtly gay affection is cut at Disney’s behest,” reads the letter in part, as originally reported by Judd Legum of the Popular Information newsletter.

The statement came as a reaction to a company-wide email sent by Disney’s CEO Bob Chapek on Monday, in which he defended the media conglomerate’s lacklustre response to Florida’s “Don’t Say Gay” bill.

The legislation is part of a broader political debate in the United States over how sexual orientation and gender identity should be recognized in schools, sports and health-care settings. The Florida bill states that “classroom instruction by school personnel or third parties on sexual orientation or gender identity may not occur in kindergarten through grade 3 or in a manner that is not age appropriate or developmentally appropriate for students in accordance with state standards.”

In their letter, the “LGBTQIA+ employees of Pixar, and their allies” call on Disney to take a firm stance condemning the controversial bill, which recently passed through the Florida senate, and withdraw financial support from the legislators responsible for backing the proposed law.

A letter from @Pixar staff to Disney leaders, obtained by https://t.co/Gl6evXRDcZ, details their anger and demands

According to NBC News, proponents of the bill argue that it gives parents more control over how their child is educated and that the bill would enforce more “age-appropriate” classroom instruction.

However, opponents see the bill as negatively targeting LGBTQ2 youth, with Florida Sen. Annette Taddeo saying “this is going to endanger the safety of our LGBTQ students and adolescents.”

Disney drew criticism for its response to the controversial bill when it released a statement last week saying, “The biggest impact we can have in creating a more inclusive world is through the inspiring content we produce, the welcoming culture we create here and the diverse community organizations we support, including those representing the LGBTQ+ community.”

Pixar employees who signed the letter took issue with the statement because, in their experience, Disney has erected obstacles to creating that “inspiring content.”

“Even if creating LGBTQIA+ content was the answer to fixing the discriminatory legislation in the world, we are being barred from creating it,” reads the letter.

Pixar has only depicted one explicitly LGBTQ2 character in its feature-length filmography, a police officer named Specter from the 2020 film Onward. Other films, such as Luca have had LGBTQ2 representation read into them due to subject matter and characterization, but Pixar still lacks stories that meaningfully depict the LGBTQ2 experience.

Disney also drew ire from Pixar employees because it was discovered that the company has donated money to every legislator who sponsored and co-sponsored the bill, according to a report by the Orlando Sentinel.

In Monday’s company-wide email, Chapek responded to this by writing, “While we have not given money to any politician based on this issue, we have contributed to both Republican and Democrat legislators who have subsequently taken positions on both sides of the legislation.”

At a shareholder meeting on Wednesday, Chapek announced Disney would donate US$5 million to the Human Rights Campaign and other organizations that advocate for LGBTQ2 rights, as well as meet with Florida Gov. Ron DeSantis to address concerns about the bill.

The Human Rights Campaign countered by stating it wouldn’t accept the money until Disney takes “meaningful action” to oppose the legislation.

After passing in the senate, the “Don’t Say Gay” bill now only requires the approval of DeSantis to become law. DeSantis has already expressed support for the legislation.

As of this writing, Disney has yet to respond publicly to the employees’ letter.

You can read the full statement by Pixar employees here:

We are writing because we are disappointed, hurt, afraid, and angry. In regards to Disney’s financial involvement with legislators behind the “Don’t Say Gay” bill, we hoped that our company would show up for us. But it didn’t.

Monday’s email, “Our Unwavering Commitment to the LGBTQ+ Community”, rang hollow. It began with the claim that Disney has a long history of supporting the LGBT community, but Disney Parks did not officially host Pride until 2019, in Paris alone. Disney has a history of shutting down fan-created Pride events in the parks, even removing same-sex couples for dancing together in the 1980’s. Additionally, Disney began capitalizing on Pride in 2018 with The Rainbow Mickey Collection, (while de-emphasizing the terms like LGBTQ+ and not even featuring explicitly LGBTQIA+ pieces such as Pride flag pins until 2021). To this end, it feels terrible to be a part of a company that makes money from Pride merch when it chooses to “step back” in times of our greatest need, when our rights are at risk.

The second claim stated that “corporate statements do very little to change outcomes or minds”. However, the very email making this claim opened with a corporate statement regarding the ongoing situation in Ukraine. Eight days after Russia invaded Ukraine, Disney paused the release of theatrical films in Russia and announced “We will make future business decisions based on the evolving situation.” Following the siege on the capital in 2021, Disney stopped all political donations to members of Congress who had objected to the presidential election results. In 2016, Disney told the state of Georgia: “We will plan to take our business elsewhere should any legislation allowing discriminatory practices be signed into state law” in response to the controversial Religious Liberty bill. By taking a stand, Disney directly affected the legislative outcome in Georgia. It has been proven that Disney’s corporate statements can and do make a difference.

Finally, we come to the push for Content as the answer. We at Pixar have personally witnessed beautiful stories, full of diverse characters, come back from Disney corporate reviews shaved down to crumbs of what they once were. Nearly every moment of overtly gay affection is cut at Disney’s behest, regardless of when there is protest from both the creative teams and executive leadership at Pixar. Even if creating LGBTQIA+ content was the answer to fixing the discriminatory legislation in the world, we are being barred from creating it. Beyond the “inspiring content” that we aren’t even allowed to create, we require action.

We are calling on Disney leadership to immediately withdraw all financial support from the legislators behind the “Don’t Say Gay” bill, to fully denounce this legislation publicly, and to make amends for their financial involvement. While signing on to donate to the HRC is a step in the correct direction, the shareholder meeting on Wednesday made it clear that this is not enough. Throughout the shareholder meeting, Disney did not take a hard stance in support of the LGBTQIA+ community, they instead attempted to placate “both sides” – and did not condemn hateful messages shared during the question and answer portion of the meeting. This is not what it means to “unequivocally stand in support of our LGBTQ+ employees, their families, and their communities.”

This matter is not something that can wait until Reimagine Tomorrow in April, or Pride Month in June. This matter needs to be addressed now. This is urgent. 42% of LGBTQIA+ youth seriously considered suicide in 2021, including more than half of transgender and nonbinary youth, with a large factor being the lack of support that these discriminatory legislations enable. Disney claims to care for the welfare of children, but supporting politicians like this directly hurts one of their most vulnerable audiences. There are lives at stake and Disney’s support could save those lives. “We still have more work to do,” your email said. This is that work.

Signed with Pride,
The LGBTQIA+ employees of Pixar, and their allies

— with files from Reuters